Ralph Lauren Corp. (RL) is under selling pressure today. Earnings are expected tomorrow, Tuesday, but traders are not waiting for the numbers to sell. Selling has been going on for most of the month and further declines are anticipated. Let's check the fit of the charts and indicators.

In this daily bar chart of RL, below, we can see a weak situation. The rally from the December low in the $95 area stalled/stopped in the $130-$135 area, or the middle of prior resistance from $125 to $145 from last May to early October.

A rally that stops in the middle of prior resistance is weak in my book. Add in closes below the 50-day and the 200-day moving average lines and you get another reason to sell.

The daily On-Balance-Volume (OBV) line shows a peak in early November and the subsequent decline even while prices rallied tells me that sellers of RL have been more aggressive and prices can decline further.

The Moving Average Convergence Divergence (MACD) oscillator is right on the zero line and could soon cross below the line for an outright sell signal.

In this weekly bar chart of RL, below, we can a potential topping pattern from early 2018. RL is testing the declining 40-week moving average line from above but it could close below it this week.

The weekly OBV line has been unable to trend to new highs for several months and the weekly MACD oscillator is poised to cross to the downside for a take profits sell signal.

In this Point and Figure chart of RL, below, we can see a downside price target around $104 being projected. 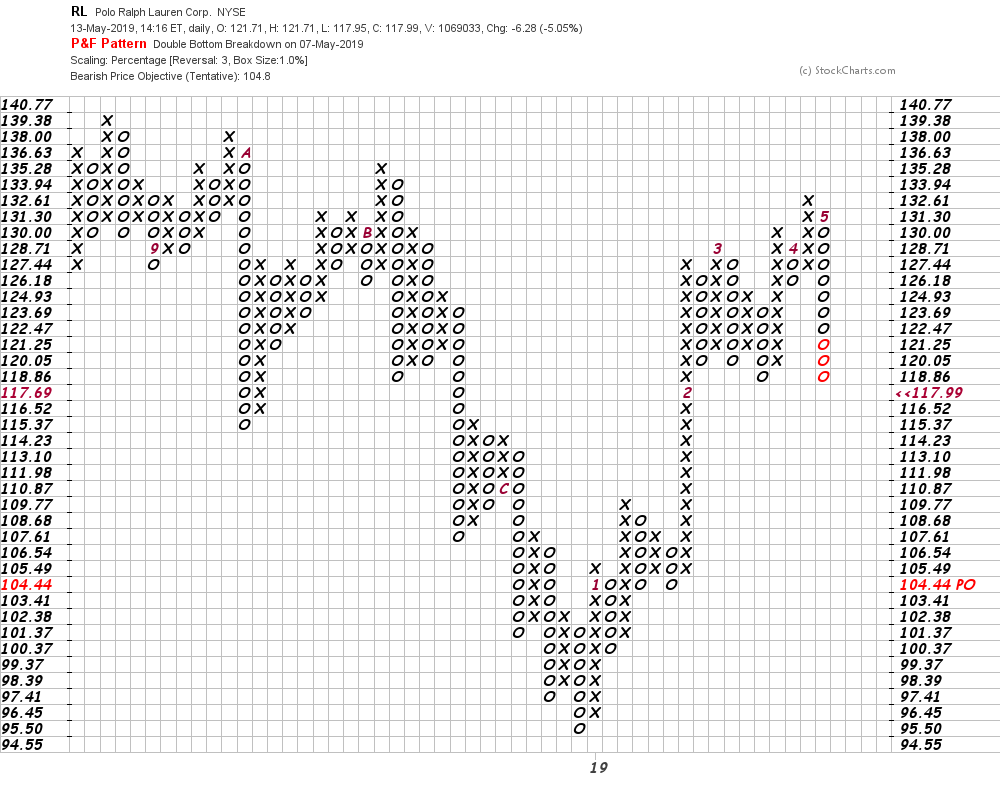 Bottom line strategy: The charts and indicators on RL look weak ahead of tomorrow's earnings report. I would not look to be a buyer.

Get an email alert each time I write an article for Real Money. Click the "+Follow" next to my byline to this article.
TAGS: Earnings | Economy | Investing | Markets | Stocks | Technical Analysis | Trading | Apparel | Retail