During Tuesday's Mad Money program, Jim Cramer told viewers that Ralph Lauren (RL) rose 5.4% Monday after it announced it's laying off 15% of its staff as it continues to transition from mall-based stores to online sales.

Let's check out the charts of RL.

In this daily bar chart of RL, below, we can see that prices are basing in the $75 area (plus or minus $10) since March. Beneath the surface the On-Balance-Volume (OBV) line has been in a decline, telling us despite the sideways price movement sellers of RL have been more aggressive with heavier being traded on days when RL has closed lower.
The slope of the 200-day moving average line remains bearish and rallies towards the underside of the average line have failed.
The Moving Average Convergence Divergence (MACD) oscillator is just slightly above the zero line - not a strong vote of confidence.

In this weekly bar chart of RL, below, we can see that prices have been in a longer-term downtrend. Prices are trading below the declining 40-week moving average line.
The weekly OBV line has been in a long-term decline. The MACD oscillator is still below the zero line and apparently a long way until a possible buy signal.

In this Point and Figure chart of RL, below, we used daily price data. Here the chart is projecting a possible downside price target in the $60-$59 area. 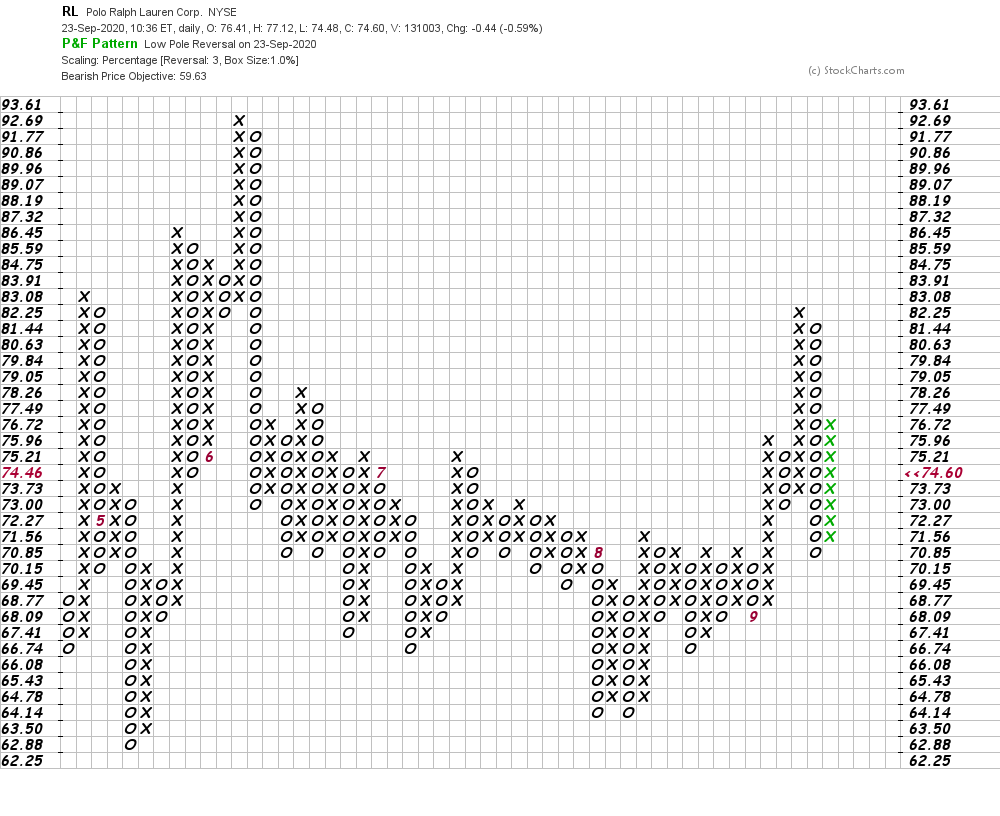 Bottom line strategy: RL is among many companies who are trying to recreate themselves. While I am rooting for RL, the charts suggest we could see further near-term price weakness and a widening of the longer-term sideways pattern.
Get an email alert each time I write an article for Real Money. Click the "+Follow" next to my byline to this article.
TAGS: Investing | Stocks | Technical Analysis | Trading | Apparel | Retail | E-Commerce