The company just delivered blowout earnings, its best in two years. TheStreet's quantitative service also raised the rating of the stock to "Buy" on Friday.

Rondeau said as the economy is reopening, people are choosing in-person fitness.

The pandemic has permanently closed 22% of the gyms in the U.S., which Rondeau said could help the company, as he cited other statistics about obesity in the U.S.

In this daily bar chart of PLNT, below, we can see that prices have soared above the late February and mid-April highs. PLNT was stuck in a lengthy sideways trend for much of the past 12 months. It was not until early September that the slope of the 50-day moving average line turned positive again. A bullish golden cross buy signal can be seen in October when the 50-day line crossed above the 200-day line. The On-Balance-Volume (OBV) line has been in a multi-month decline so I cannot become very bullish on PLNT. The Moving Average Convergence Divergence (MACD) oscillator is bullish.

In this weekly Japanese candlestick chart of PLNT, below, we can see a strong white candle breaking the previous highs around $90. Prices are above the rising 40-week moving average line. The weekly OBV line shows a little improvement from late August but stands well below its highs and thus is a bearish divergence when compared to the price action. The MACD oscillator is bullish but not particularly strong.

In this daily Point and Figure chart of PLNT, below, we can see a potential upside price target of $143. 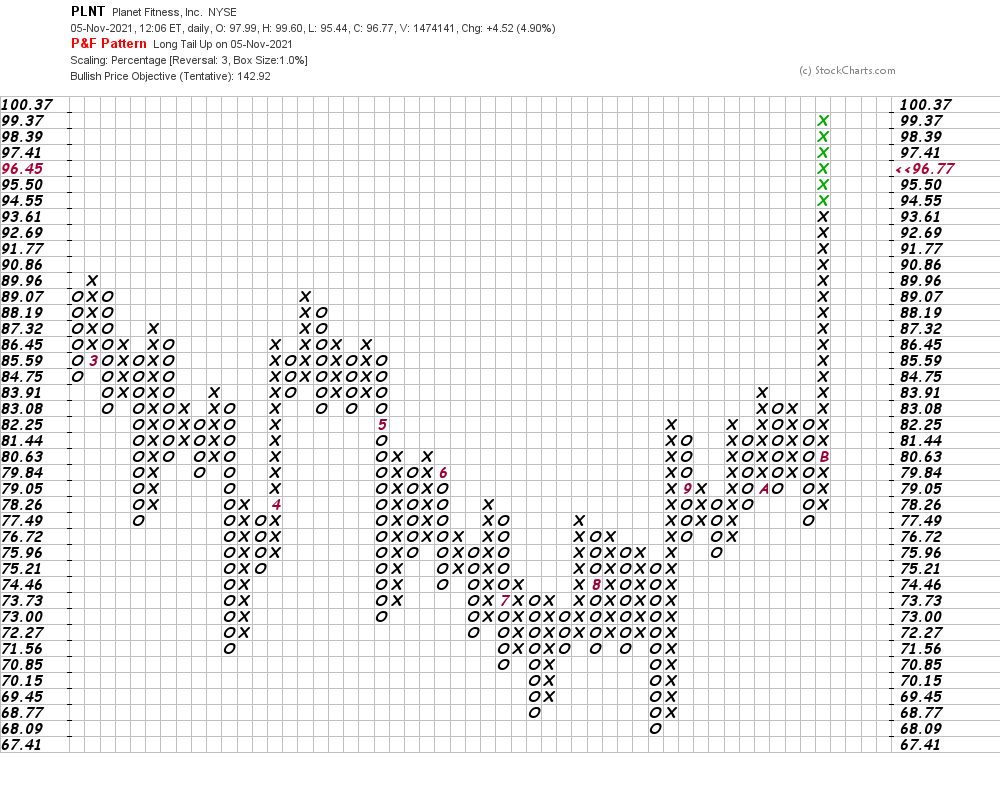 Bottom line strategy: Working out, whether in a gym or at home, is a good idea, but the charts of PLNT are not convincing enough for me to recommend a long position in the stock. The year-long decline in the OBV line is not a confindence builder. I would pass on a purchase of PLNT, until I see better signs of aggressive buying.