Rainey said PayPal had a great quarter and the company also reaffirmed its 2019 guidance provided in October. There were some pockets of weakness, currency pressures and slower growth in some areas of the world.

When asked about competition, Rainey explained that it is not a winner-takes-all situation. PayPal currently has over 20 million merchants and 250 million consumers on its platform. There are two billion people around the globe who are under-served financially, he explained, and many have mobile phones which can increase the possibilities.

In this updated daily Japanese candlestick chart of PYPL, below, we can see that Thursday's price action was more of a "doji" in that prices closed near where they opened giving us a balanced day - neither the bulls nor the bears got the upper hand.

Prices declined towards the rising 50-day and 200-day moving averages but closed well above them.

The level of trading volume was not huge and the daily On-Balance-Volume (OBV) line did not dip much. That tells me that sellers did not become more aggressive.

The Moving Average Convergence Divergence (MACD) oscillator did cross to the downside from above the zero line for a "take profits" sell signal or a sell when the market is in an uptrend.

In this weekly bar chart of PYPL, below, we can see that prices are still above the rising 40-week moving average line.

The weekly OBV line has not weakened but it won't be updated until today's close.

The weekly MACD oscillator still shows an outright buy signal with its crossover above the zero line.

In this Point and Figure chart of PYPL, below, we can see a column of "O's" showing the recent pullback. Prices are back to a support zone and the software still shows an upside price target of $118.96. 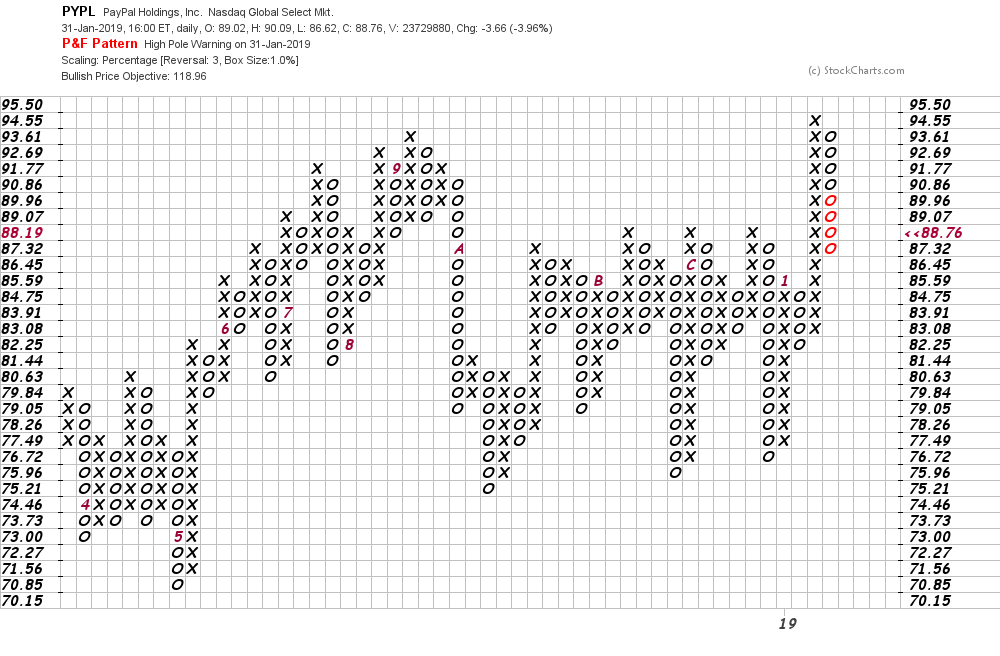 Bottom line strategy: In our update of Jan. 25 we said, "Barring a reversal, PYPL looks to be on its way to the $120 area. Traders could hold existing longs or initiate new longs at current levels. Risk a close below $88 for now."

(PayPal is a holding in Jim Cramer's Action Alerts PLUS member club. Want to be alerted before Jim Cramer buys or sells PYPL? Learn more now.)

Get an email alert each time I write an article for Real Money. Click the "+Follow" next to my byline to this article.
TAGS: Earnings | Investing | Markets | Stocks | Technical Analysis | Trading | Financial Services

In a Stock-Picker's Market, the Results May Surprise You

Returns can be robust if the conditions are favorable, but it won't always be so fruitful.

Walmart Remains in an Uptrend, Continue to Trade It From the Long Side

It generally pays to stay with the trend in force and to focus more on closing prices than opening prices.

SPCE is about commercial spaceflight, the future, and possibly a radical shift in some commercial airline travel as well.

If it gets dragged lower with the broader market, HD could dip, but then the charts and indicators show it will likely rise after.