For his "Executive Decision" segment of Mad Money Friday night, Jim Cramer sat down with Alex Gorsky, chairman and CEO of Johnson & Johnson (JNJ) . Gorsky said that JNJ just completed another solid quarter and they remain very excited about the outlook for 2019.

Gorsky was also upbeat about J&J's recent partnership with Apple (AAPL) to help bring new apps and functionality to the Apple iWatch. He said the combination of technology and healthcare can be very powerful and help save lives and money for our healthcare system. The Apple iWatch can already detect conditions like Afib, he said, but that's only just the beginning.

Robotics is another area Gorsky was excited about. He said only 5% of surgeries today are performed digitally or with robotics and that leaves a huge area to improve patient outcomes.

Sounds like an upbeat fundamental story but let's look at the charts and indicators to round out the picture.

In this daily bar chart of JNJ, below, we can see that prices have recovered about half of its December slide. JNJ made a low in late December along with the broad market and it has since recovered.

Prices are above the slightly rising 200-day moving average line and above the still declining 50-day line. Because moving averages lag the market the 50-day line is now crossing below the 200-day line for a belated and potentially bearish death cross of these tow indicators. The trading volume has not really increased from the late December low and thus not really confirming the price rise.

The daily On-Balance-Volume (OBV) line is a simpler way to look at volume and it was flat from December to late January, and did not signal more aggressive buying until recently.

In this weekly bar chart of JNJ, below, the price decline of December does not look so bearish. If you look at the decline in January 2018 you have a point to compare. Prices held support in the $120 area earlier in 2018 and stopped short of that area in late December. JNJ is above the slightly rising 40-week moving average line.

The weekly OBV line shows a little improvement from its December low but is well below its best level of 2018.

The weekly MACD oscillator is close to crossing to the upside from below the zero line for a cover shorts buy signal. An outright buy signal may not be that far off either.

In this Point and Figure chart of JNJ, below, we can see that prices are in an up column of X's. A possible upside price target of $153.74 is being projected. This would be a new high for the move up but not that bullish of a target if it was reached. 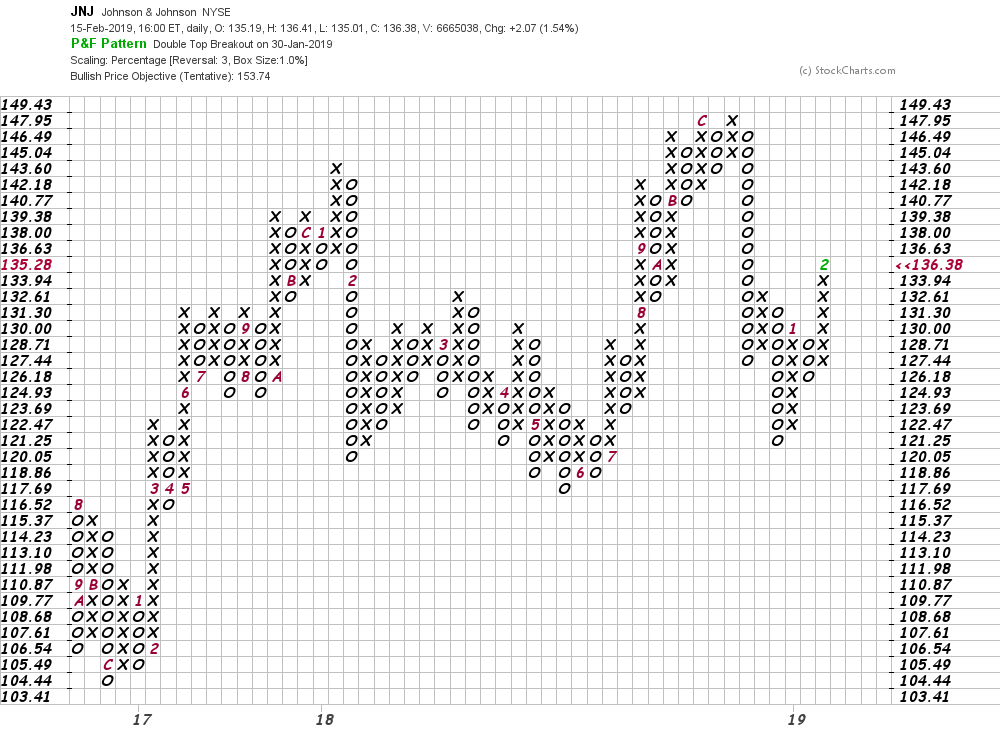 Bottom line strategy: JNJ is a brand name that everyone seems to know but that does not mean that everything on the price chart is in agreement and bullish. JNJ could work higher and we have a $153 price target from our Point and Figure chart, however, chart resistance in the $140-$149 area from November and December could stall or even reverse further strength. JNJ will have to show me more from a technical perspective to make me feel comfortable with recommending the long side.

(Johnson & Johnson and Apple are holdings in Jim Cramer's Action Alerts PLUS member club. Want to be alerted before Jim Cramer buys or sells JNJ or AAPL? Learn more now.)

Get an email alert each time I write an article for Real Money. Click the "+Follow" next to my byline to this article.
TAGS: Investing | Stocks | Technical Analysis | Trading | Healthcare | Pharmaceuticals