In his second "Executive Decision" segment of Mad Money Monday night, Jim Cramer sat down with Scott Flanders, CEO of eHealth (EHTH) , the healthcare comparison website whose shares are up 136% in 2019.

Flanders started off by explaining that eHealth has been around for 12 years and helps people choose the best health plans. With over 60 million seniors, there are a lot of people who need guidance finding the right plan, especially for the millions of people who have never had to shop for a plan before.

Choosing the right plan is complicated, Flanders explained. That's why their agents are career consultants who must be licensed in every state and vetted by every health plan provider. Only one in 10 Americans is currently in the best plan, he added, and that's because there are so many variables such as where you live, who your primary care provider is, which specialists you need to see and which medications you're taking, to name a few.

When asked about the Medicare-for-all type plans being proposed by some Democratic presidential candidates, Flanders said with over 150 million people paying into employer-sponsored plans, he sees little chance people will vote for sweeping changes.

In this daily bar chart of EHTH, below, we can see that prices had a strong rally from late December to early August and prices look like they more or less tripled. From August to the middle of October prices corrected deeply with the support zone of $70-$50 nearly broken.

Since early October the On-Balance-Volume (OBV) line has recovered nearly all its decline and it is close to making a new high. The Moving Average Convergence Divergence (MACD) oscillator moved to a new buy signal in early November.

In this weekly bar chart of EHTH, below, we can see that EHTH has rewarded patient and early investors with significant gains the past three years. After a correction earlier this year, prices are back above the rising 40-week moving average line.

The weekly OBV line has made a new high before prices have and could be foreshadowing new price highs in the weeks ahead. The MACD oscillator just crossed to the upside for a fresh outright go long signal.

In this first Point and Figure chart of EHTH, below, we can see that prices have reached and exceeded their upside price target around $81. 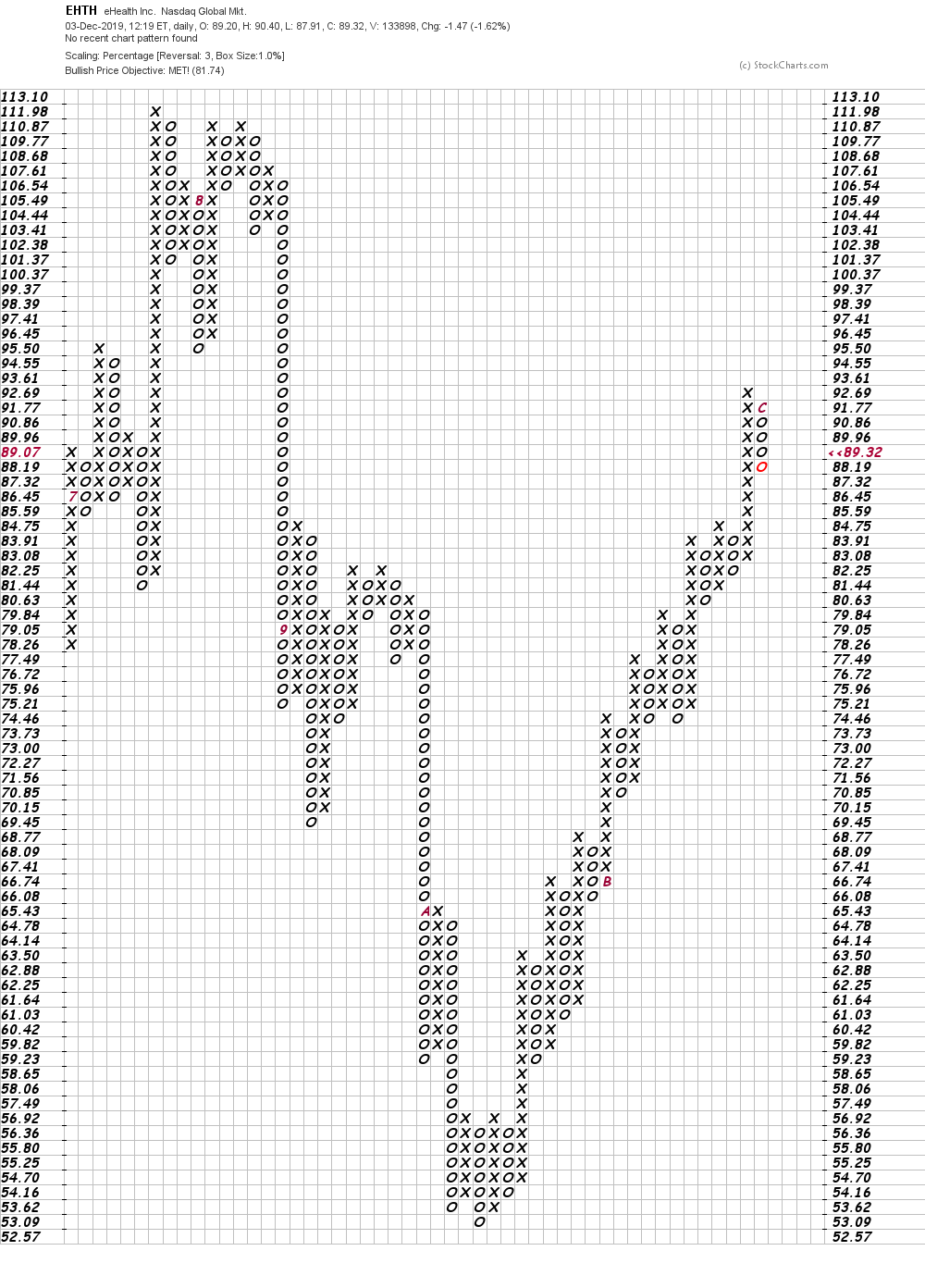 In this second Point and Figure chart of EHTH, below, we used weekly data and here a potential longer-term price target of $171 is being suggested.

Bottom line strategy: EHTH has made a rapid climb in recent weeks so some period of consolidation or sideways price action is probably due. Traders could use this anticipated sideways activity to go long risking a close below $75 for now.

Get an email alert each time I write an article for Real Money. Click the "+Follow" next to my byline to this article.
TAGS: Investing | Stocks | Technical Analysis | Trading | Healthcare | Mad Money | Executive Interview