The charts of DowDuPont (DWDP) have been improving the past three months. A slight sideways to lower trading pattern shows a bullish divergence and other technical improvements. Let's check out the charts.

In this daily bar chart of DWDP, below, we can see two chart patterns. First is a price decline into a late December low. The second pattern is a $60 to $48 consolidation pattern. As prices moved sideways the past three months the 50-day moving average line turned flat from down and prices have closed above that short-term math-driven indicator. DWDP is still below the declining 200-day moving average line but it intersects around $63 now.

The volume histogram below the price chart shows heavier volume being traded from October to the end of December. Heavy volume around a price low suggests that aggressive selling has been met by aggressive buying.

Indeed, the daily On-Balance-Volume (OBV) line shows a bullish divergence as it made equal lows from October to December when prices made lower lows.

In this limited weekly bar chart of DWDP, below, we can see a downtrend and a bearish 40-week moving average line. The 40-week line looks like it is starting to flatten out.

The weekly OBV line shows a double bottom in October and December and the MACD oscillator has crossed for a longer-term cover shorts buy signal.

In this Point and Figure chart of DWDP, below, we can see an upside price target of $65.53 being projected. 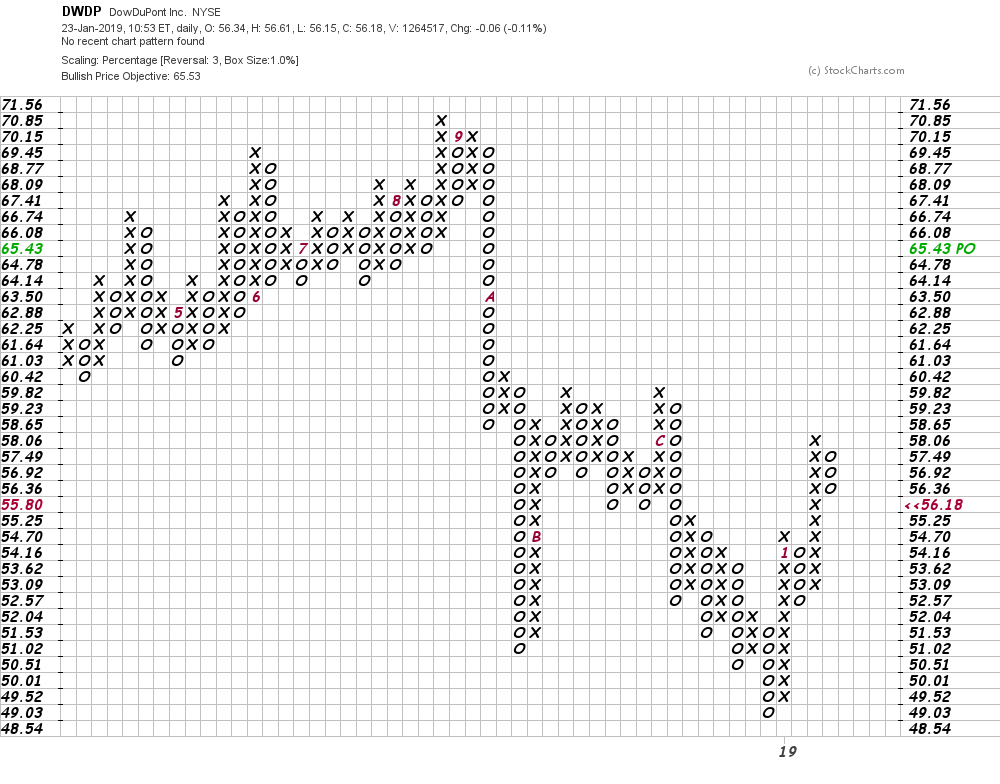 Bottom line strategy: DWDP could trade sideways for a period of time but the indicators are giving us enough evidence to probe the long side in the $56-$54 area risking below $51. A rally to the $64-$68 could develop in the next few weeks.

(DowDuPont is a holding in Jim Cramer's Action Alerts PLUS member club. Want to be alerted before Jim Cramer buys or sells DWDP? Learn more now.)

Jim Cramer discussed DWDP on his latest Action Alerts PLUS conference call. Click here to access the call and learn more about AAP.

Get an email alert each time I write an article for Real Money. Click the "+Follow" next to my byline to this article.
TAGS: Investing | Markets | Stocks | Technical Analysis | Trading | Chemicals

Selling of This Sort Is Index Driven and Is Highly Correlated

My game plan is to not get in the way of the index selling as I watch for entries in some of the individual stocks that I like.

Adding to My Biotech Positions When Profit-Taking Hits

Here's my strategy which has worked particularly well.

We now have sufficient evidence to tip the scales.

Some investors can handle the downs that come with the ups while others become squeamish, so consider how a pullback could affect you.

Can D.R. Horton Build on Its Bull Run After Earnings?