On Tuesday, Jim Cramer will be watching the earnings' numbers from Dick's Sporting Goods, Inc. (DKS) , which will tell him whether to buy Nike, Inc.  (NKE) .

Cramer also plans to watch the Consumer Price Index, which will be followed by the Producer Price Index on Wednesday. Cramer said he expects these metrics to confirm that Friday's anemic new jobs numbers were an anomaly.

In the daily bar chart of DKS, below, we can see an up and down sideways pattern of trading the past twelve months. This is the kind of trading environment where overbought/oversold oscillators can work well, such as tools like the Relative Strength Index (RSI) and the slow stochastic indicator.

The volume pattern is hard to see and interpret, but the On-Balance-Volume (OBV) line has been rising the past year, which suggests that shares have been accumulated (bought) in the last twelve months.

The trend-following Moving Average Convergence Divergence (MACD) oscillator has swung above and below the zero line, but is currently above the line in bullish territory, yet crossing lower for a take-profits sell signal.

In this weekly bar chart of DKS, below, we can see a bullish alignment of the indicators.

Prices are above the slightly rising 40-week moving average line. The weekly OBV line has been rising since August 2017 and suggests some serious buying the past year.

The MACD oscillator just turned up above the zero line for a fresh outright go-long signal.

In this weekly point and figure chart of DKS, below, we can see an upside price target of $55. 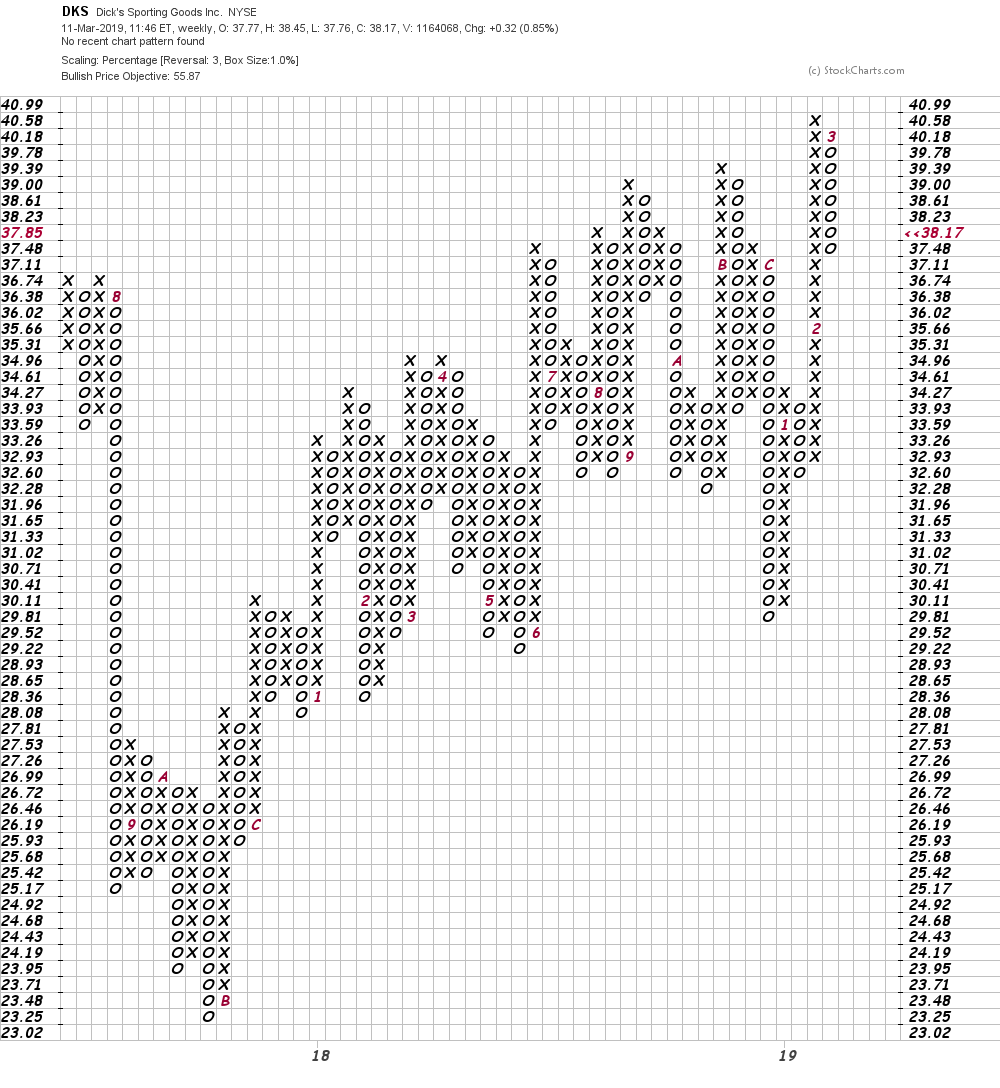 Bottom-line strategy: DKS has largely traded sideways, but the OBV line suggests some long and strong buying. If this volume indicator is correct, then at some point in time DKS could rally to the $50-$55 area.

Get an email alert each time I write an article for Real Money. Click the "+Follow" next to my byline to this article.
TAGS: Earnings | Investing | Technical Analysis | Sports