The bears argue that growth at Canada Goose is continuing to slow. The company has put its expansion plans in China on hold and it's experiencing weaker sales worldwide, including its namesake Canada.

But the bulls noted that while Canada Goose cut its forecasts by 20% this quarter, shares only fell by 4%, indicating that the bad news might finally be discounted.

In this daily bar chart of GOOS, below, we can see that prices have sunk lower and lower the past 12 months. Prices have pretty much been cut in half and sometimes that amount of a discount can attract buyers.

The daily On-Balance-Volume (OBV) line shows a slight rise into early August and then a decline into February. The downtrend in the OBV line tells us that sellers of GOOS have been more aggressive.

In this weekly bar chart of GOOS, below, we can see that prices topped out around $70+. Prices have been in a decline and below the 40-week moving average line which has a negative slope.

The weekly OBV line has been in a decline from the middle of 2018 but it shows some stability in the past three months.

The 12-week price momentum study shows higher lows from May to January and this is a bullish divergence when compared to the weakening price action.

In this daily Point and Figure chart of GOOS, below, we can see some accumulation (buying) and the chart shows a potential upside price target of $39. Not great but it's a start. 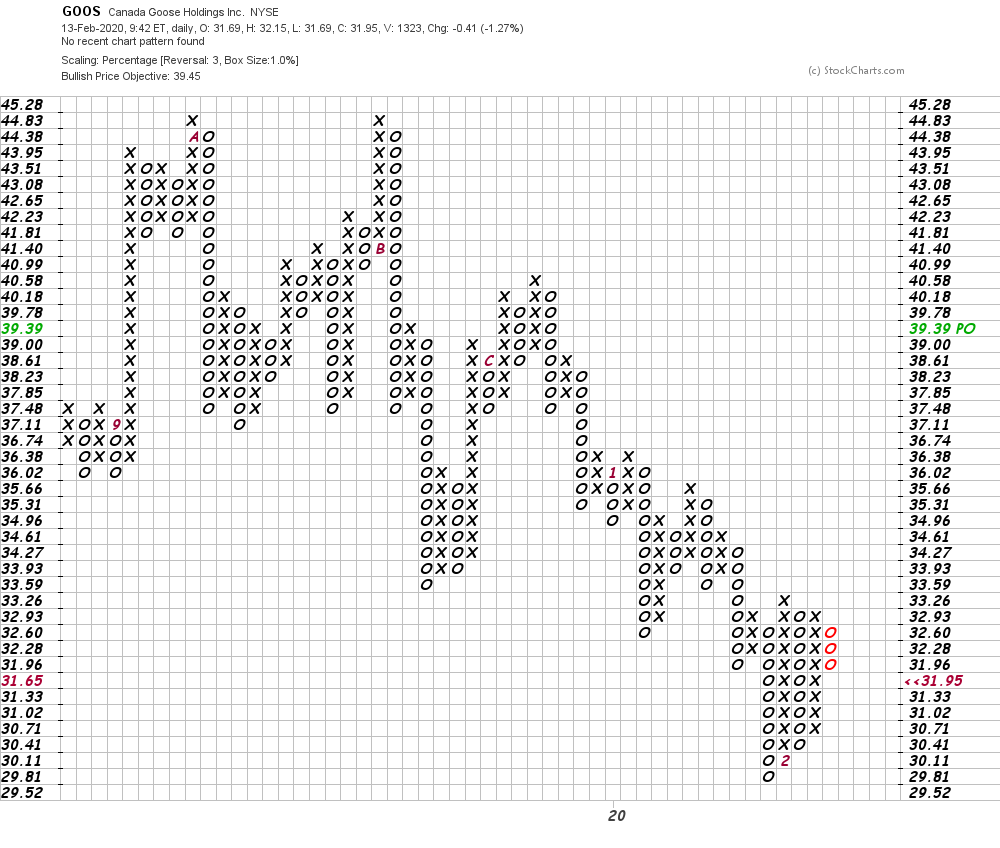 Bottom line strategy: Jim Cramer is lined up with the bears but the charts suggest that the downtrend in GOOS is in its late stages and we could see a rally or bounce to test the declining 200-day moving average in the weeks ahead. A sustained advance will probably need a better base pattern than what we have now.

Get an email alert each time I write an article for Real Money. Click the "+Follow" next to my byline to this article.
TAGS: Investing | Markets | Stocks | Technical Analysis | Trading | Apparel | Retail | Mad Money