In his "Selloff Strategies" segment of Mad Money, Jim Cramer took calls from Cramerica to help them look at Wednesday's decline logically and not from a place of fear and panic. Panic is never a strategy, he reminded viewers.

Cramer was asked about a number of stocks and he was bullish when asked about BlackRock (BLK) . Let's check the charts for an area to probe the long side.

In this daily bar chart of BLK, below, we can see a double top-like pattern in May and July. Prices have just broken the late May/early June low which would suggest that the height of the pattern can be projected lower for an approximate $360 price target.

BLK is below the cresting 50-day moving average line and the rising 200-day line.

The On-Balance-Volume (OBV) line has moved up and down with the price action from late December and has declined slightly the past four weeks. The price decline so far this month looks steeper than the OBV decline.

The Moving Average Convergence Divergence (MACD) oscillator moved below the zero line earlier this month for an outright sell signal.

In this weekly bar chart of BLK, below, we can see that prices are below the rising 40-week moving average line.

The weekly OBV line has been positive from the December nadir but is starting to show softness in July.

The MACD oscillator has crossed to a take profits sell signal and is not far above the zero line.

In this Point and Figure chart of BLK, below, we can see a potential downside price target of $383 for the global money manager. 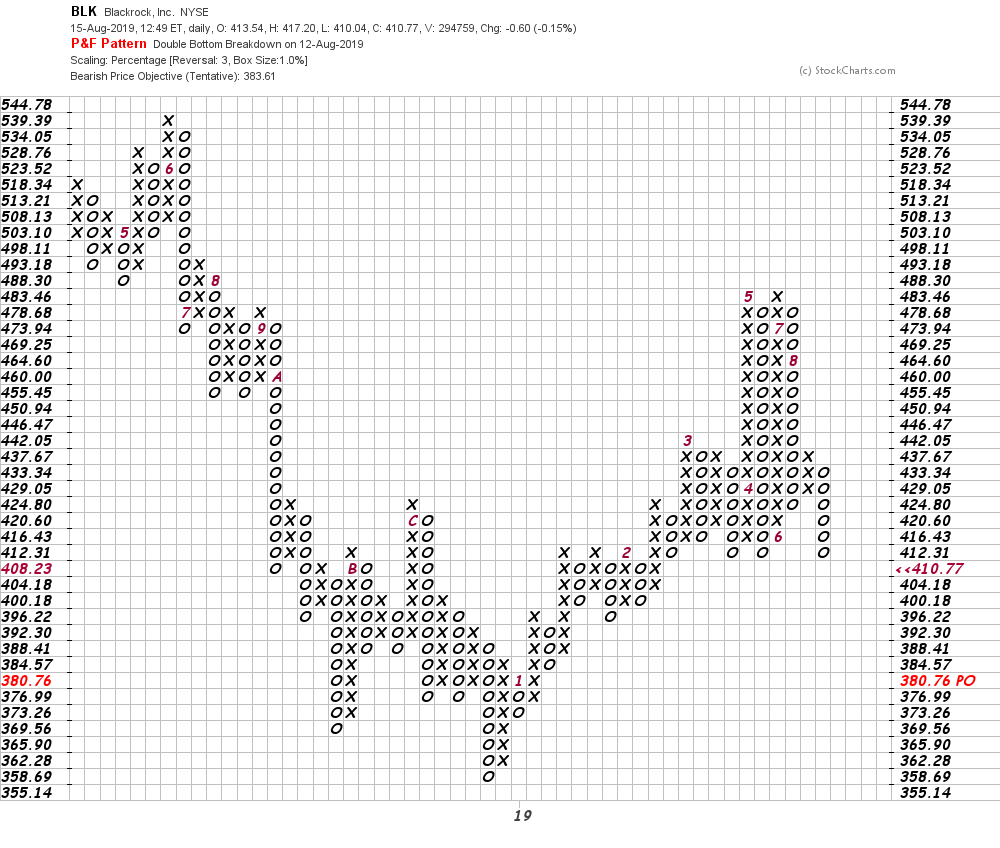 Bottom line strategy: I would put BLK on the shopping list to go long in the $383-$360 area, possibly in October.

Get an email alert each time I write an article for Real Money. Click the "+Follow" next to my byline to this article.
TAGS: Investing | Technical Analysis | Trading | Financial Services | Mad Money