Becton, Dickinson & Co. (BDX) was mentioned during the Lightning Round of Mad Money last night. Jim Cramer said, "This is exactly the type of stock people will be looking for."

In this daily bar chart of BDX, below, we can see that prices made a peak in early October and prices weakened into late December/early January. BDX rallied smartly into March but has since "rolled over" and looks vulnerable to further declines in the near-term.

The volume of trading looks like it has increased since March as prices have weakened.

The daily On-Balance-Volume (OBV) line has declined since early April and suggests that sellers of BDX have been more aggressive.

The trend-following Moving Average Convergence Divergence (MACD) oscillator is in a bearish or sell mode below the zero line.

In this weekly bar chart of BDX, below, we can see a potential topping or bearish pattern from late 2017 with a possible "neckline" across the $210 level. Prices are below the declining 40-week moving average line.

The weekly OBV line is slowly turning lower and the MACD oscillator just crossed below the zero line for a sell signal.

In this Point and Figure chart of BDX, below, we can see a nearby downside price target of just below $220. Not a big risk. 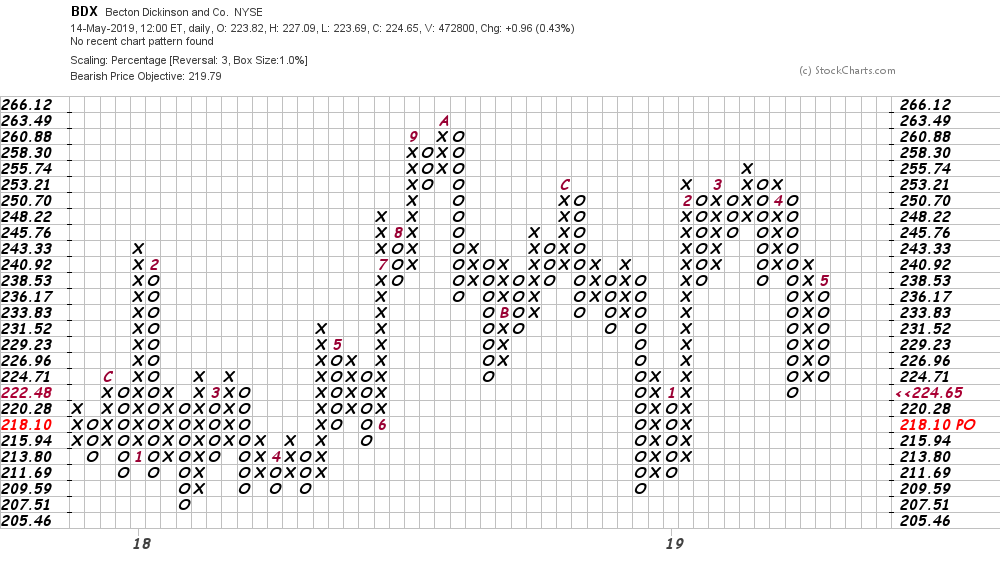 Bottom line strategy: BDX may have good fundamental bones but the charts and indicators do not yet suggest that prices are ready and positioned to rally.