In his second "Executive Decision" segment of Mad Money Monday evening, Jim Cramer sat down with Rich Smith, CEO of Axon Enterprise  (AAXN)  , a stock that's down 6% for the year after the Federal Trade Commission took issue with the company's acquisition of rival VieVu.

Smith explained that Axon, which manufactures and sells conducted electrical weapons, spent $7 million to acquire VieVu, which was on the verge of bankruptcy, to prevent VieVu's customers from seeing an interruption in their service. Axon felt the deal falls well within the failing safe harbor provisions, but the FTC says otherwise, Smith said.

Axon has chosen to file suit with the FTC to have a federal judge weigh in on the issue.

Turning to the rest of their business, Smith explained that Axon's mission continues to be making bullets obsolete and every generation of their tasers takes them one step closer to surpassing the effectiveness of handguns.

In this daily bar chart of AAXN, below, we can see that prices have had problems in the $74-$78 area in June, November and December/January. Prices tend to trade in the direction of least resistance and right now it looks like this overhead resistance is rejecting prices. AAXN is close to a test of the rising 50-day moving average line and a close below the line would weaken the chart picture. The 50-day average line closed above the rising 200-day line in December but this golden cross does not look like it will be a very successful buy signal.

The On-Balance-Volume (OBV) line topped out in December and made a new low for the move down this year to signal more aggressive selling.

The Moving Average Convergence Divergence (MACD) oscillator is in a take profits sell mode and is pointed down towards the zero line suggesting more weakness ahead.

In this weekly bar chart of AAXN, below, we can see that the $75 area has proven to be significant resistance since 2018. Prices are above the rising 40-week moving average line but the line intersects around $65 now - not all that far away.

The weekly OBV line shows strength in November and December but it has failed to firmly move up to new high ground. Weakness in the OBV line from here would not be a positive development.

The MACD oscillator is above the zero line but it has begun to narrow towards a possible future bearish crossover.

In this daily Point and Figure chart of AAXN, below, we can see a potential downside price objective in the $62-$61 area. 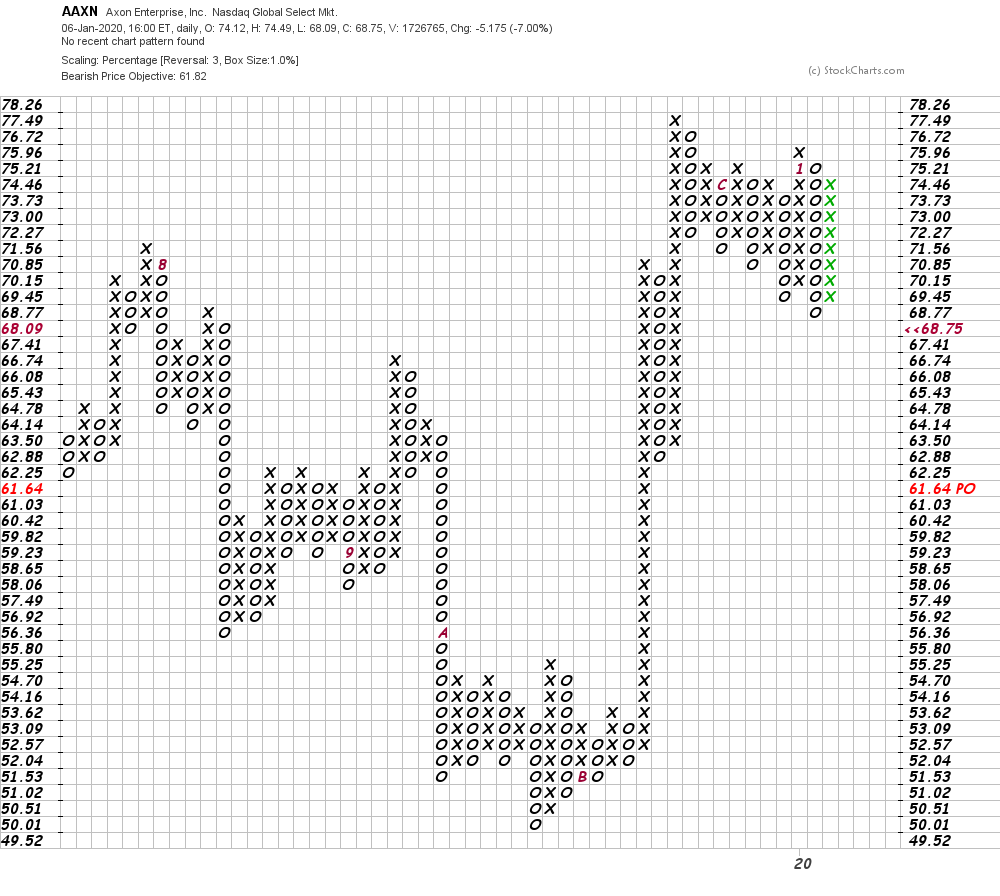 Bottom line strategy: There are enough weak or bearish technical signals on AAXN to recommend that traders avoid the long side of this stock. A decline to the $62 area is likely to weaken the chart further. Avoid.

Get an email alert each time I write an article for Real Money. Click the "+Follow" next to my byline to this article.
TAGS: Investing | Stocks | Technical Analysis | Trading | Defense | Mad Money | Executive Interview

I'm Not Sold on Kilroy Realty Based on Its Charts

The technical signals for the REIT are mixed at best and don't inspire confidence.