Amazon (AMZN) reported the firm's third quarter financial performance on Thursday night. The numbers were disappointing. We'll get to that in a minute. The stock sold off hard overnight primarily because Amazon guided current quarter net sales toward a range spanning from $130 billion to $140 billion, but guided operating income toward a range spanning from zero (yes, zero dollars) to $3 billion. Not only was Wall Street expecting something along the lines of $7.5 billion to $8 billion on that guide, the fact that the firm is unwilling to risk projecting a profit on $130 billion to $140 billion in sales is absolutely stunning... and from a shareholders' perspective, unforgivable.

Now, I'm not blaming anyone, nor am I taking newish CEO Andy Jassy to task for the strategic path he has gone down. I just think a reduced core position might be wise going forward, or in opposition to our thinking on Apple (AAPL) , maybe we should "trade Amazon, don't own it."

For the September quarter, Amazon reported GAAP EPS of $6.12, which was "good" enough for a year over year contraction of 51%, and nearly $3 below consensus view. Revenue generated for the three month period totaled $110.81 billion. That number missed by a rough $850 million, and was good enough for growth of 15.3%.

Third Party Seller Services contributed revenue of $24.252 billion, up 19%, and in line with expectations.

The big number everyone wants to see from Amazon every quarter, or every normal quarter I should say... is the Amazon Web Services print. AWS saw sales accelerate, up 39% to $16.11 billion, somewhat easily exceeding Wall Street. This is where CEO Andy Jassy came from, and this business remains one of the firm's fastest growers and most effective margin drivers.

Subscription Services, which includes Prime, experienced revenue growth of 23% to $8.148 billion, a slight beat. Almost impossible to overstate the importance of recurring revenue. That is why rival Walmart (WMT) is trying to replicate the Prime model.

"Other", which for all intents and purposes really means "advertising and other", saw extremely robust growth of 49% to $8.091 billion. Unfortunately, this fell short of Wall Street's mark despite the fact that Amazon relies less upon Apple to track mobile app user activity than do other internet based apps that are selling advertising space.

Lastly, Physical Stores - still primarily Whole Foods - contributed $4.269 billion toward the revenue pie. This was a beat. This is one area that bothers me that was not really addressed last night. As competitors like Walmart and Target (TGT) have improved their valuation metrics by emulating Amazon's online store strategy, why would Amazon even pretend to want to compete with those two where they are strong in their physical presence when that is a much lower multiple business.

For the quarter reported, Amazon points at labor shortages, problems with global supply chains, inflation across such materials as steel, inflation for services, as causation for as much as a $2 billion negative impact. Amazon projects this negative impact to potentially almost double sequentially from Q3 to Q4. Amazon incorporated $4 billion in additional costs into the guidance. The firm also expects to increase spending on digital media content by about $1 billion, and expects to realize a negative $1 billion impact from reduced fixed cost controls across fulfillment centers.

In short, the stock at this valuation feels heavy and is willing to stay heavy in order to better set up its future. That doesn't mean that each and every one of us has to go along for the ride. 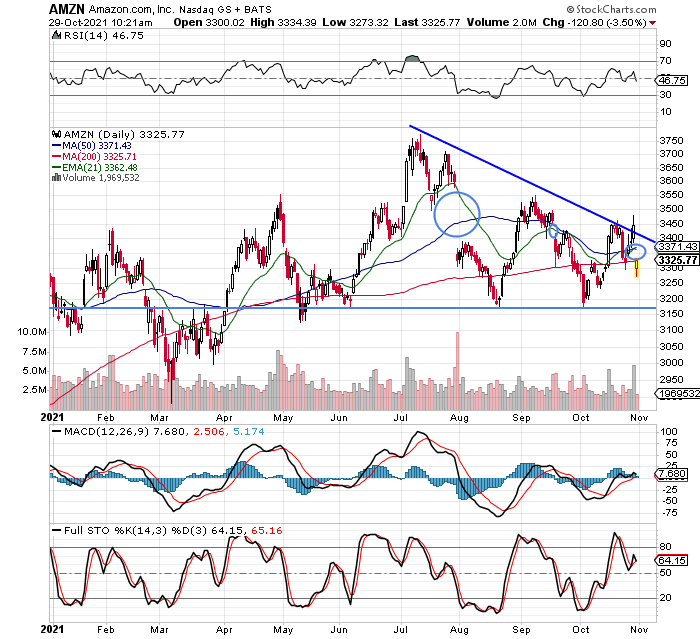 Recent price discovery for Amazon presents as a "descending triangle", which for those new to technical analysis, means a bearish set-up. All three of the indicators that I tend to focus on, Relative Strength, the Full Stochastics Oscillator, and the daily MACD are neutral in posture at this time. All three of the moving averages that I focus on, the 21 day EMA, 50 day SMA, and 200 day SMA are bunched together in what looks like a traffic jam, making any crossovers somewhat less impactful.

Readers will also see that maybe shareholders cannot count on those upside unfilled gaps as much as they hoped for. The late July gap came very close to being filled in September, and the mid-September gap filled in mid-October. You may only have this morning's gap on your side from a gravitational pull sort of perspective.

Obviously, my ridiculous $4,500 price target is cancelled. I told you in this morning's Market Recon that I recently went from overweight back down to core. Though my remaining position is still up from net basis, it is certainly a blight upon today's P/L. My plan moving forward is to trade my way out of my core position - amazing how much cash this frees up - and trade the name as I see fit. I don't think anyone needs to have Amazon on their book for a little while. Of course, the holidays are coming, so some exposure might be a good idea. One can also get some of that exposure as well as a broader exposure to the online retail space through United Parcel Service (UPS) and FedEx (FDX) . At least they are more likely to have pricing power. Higher fuel costs, but also pricing power.

(Amazon, Apple, Walmart and UPS are holdings in the Action Alerts PLUS member club. Want to be alerted before AAP buys or sells these stocks? Learn more now.)

Get an email alert each time I write an article for Real Money. Click the "+Follow" next to my byline to this article.
TAGS: Earnings | Investing | Markets | Stocks | Technical Analysis | Trading | E-Commerce