Equity markets tried to rally on Tuesday. There was some give and take up until close to lunchtime. That was when the bough broke. The losing streak we spoke of roughly 24 hours ago... continued.

The catalyst? A stronger than expected ISM Non-Manufacturing survey for August that permitted more selling across the spectrum of US Treasuries, that peripherally put pressure on equities. Don't fight the Fed. The algorithms seemingly do understand. They have been regularly getting more than out of the way of late, actually making sales, even on higher trading volume as we had on Tuesday, even at depressed pricing as we have had for days now.

On Tuesday, the Nasdaq Composite gave up 0.74%, dragged lower by the Philadelphia Semiconductor Index that took a 1.07% hit. Those two indexes are now down 26.21% and 34.84% year to date. Sharply rising yields also take a serious toll on smaller cap stocks. As the yield for the US Ten Year Note has spiked of late...

The Russell 2000, down 0.96% on Tuesday, has now stepped back into the abyss year to date, down 20.17%. The Nasdaq Composite, Philadelphia Semiconductor Index, and Russell 2000 have all traded lower for seven consecutive sessions.

The persistent selling, has in my opinion, been sharp and one-sided enough since late August to suggest that a pause in the current rush through the out-door could be imminent. Should we experience a lull in active pressure for a time, I would caution on increasing equity exposure for any purpose other than short-term trading as I remind readers of something I have been saying for months now...

US equity markets mired in a downtrend with a central bank postured hawkishly, have never, and I mean, never, ever experienced a change in trend without a pivot in posture by the Federal Reserve. In other words, as long as the Fed is talking about large near-term future increases made to short-term interest rates, while methodically and aggressively draining the monetary base, equities will not be able to sustain anything more than a sloppy, and constrained existence.

That's not even a criticism of the Fed, which is a path that I could certainly go down this morning. This is just a fact of life that must be understood by those of us who must wade our way into the marketplace every morning with no net and no guarantees and can only eat if we successfully hunt and kill.

The Madness of Conflicting Macro

The driving force behind the Tuesday selloff across both equity and debt markets was the better than expected (and up for a second consecutive month) results for the ISM Non-Manufacturing survey that printed at a headline reading of 56.9, well into expansionary territory. However, the S&P Global US Services PMI, which supposedly measures very nearly the same space, put a headline print of 43.7 to the tape.

This is deeply in contractionary territory for a second straight month, and a fifth consecutive month of deceleration. New orders, which are the lifeblood for surveys like this, printed at their highest level for the ISM survey since December of 2021, and for the S&P Global PMI survey at their lowest level since May 2020. Hmmm.

Obviously, while both of these surveys claim to cover the same slice of the US economy, these surveys are talking to different people. The ISM (Institute for Supply Management) polls purchasing managers of corporations and includes construction, mining, utilities and government managers in their survey. S&P Global polls other corporate executives as well as purchasing managers, sticks to the private sector and does not consider construction, mining or utilities to be part of the service economy.

So, while each claims to translate and package service sector economic conditions in such a way so that we can better interpret the results, these surveys are not an apples to apples comparison. In addition, given that many of the world's PMI surveys are conducted by S&P Global, clearly US ISM survey data is probably not suitable for cross border comparison when trying to understand conditions in one nation versus another.

While no one can deny that rising yields, especially rising real yields have been a recent negative for equities, the fact is that the Treasury yield curve is steepening, and working toward un-inverting some key spreads. This, if not laying the groundwork for a somewhat better than awful economic data tomorrow, at least allows potentially for such a reality.

... While also moving the much warned about US Ten Year/Three Month yield spread away from Pandora's Box...

This spread has even recaptured its 21 day EMA, and is as wide as it has been since late July. Just a heads up... the US Treasury Department's website shows the Par Real Yield for the US Ten Year Note at 1.11% for Tuesday. It has been north of 1% since September 1st and is up from 0.67% on August 1st. This real yield has not been negative since March 31st, and printed at -0.36% on January 3rd, the first business day of 2022.

On Tuesday night (NY Time), the CGAC (China's Customs agency) posted an August US Dollar denominated Trade Balance of $+79.4B, down from $+101.3B in July and well below the $+91.8B that economists had expected. This shows a year over growth of 7.1%. buoyed by 26.5% export growth in trade with Russia and 11.1% export growth to the European Union. Chinese exports to the US contracted 3.8% year over year. This is the first outright contraction in that space since May 2020. Chinese imports from all sources increased just 0.3%.

Traders can expect a smaller Chinese trade surplus to impact the exchange rate between the yuan and the US dollar going forward, which will have its own impacts on cross-Pacific trade, especially in China's ability to purchase commodities. The PBOC, China's central bank is seen as torn between providing stimulus for the Chinese economy amid ongoing Covid-related lockdowns and the need to slow the home currency's depreciation.

Today (Wednesday) is Apple (AAPL) launch day. That in no way means that AAPL will trade higher today. In fact, the stock often does not react well to planned Apple news events. It does mean, however, that traders have to pay attention to Cupertino today, even if they are not actively in the name.

News breaks this morning that Ukrainian forces currently engaged in an offensive near the city of Kharkiv have been making advances. There have apparently also been other recent gains made against Russian forces in the east and south of "occupied" Ukraine. Russian supply hubs and routes are known to have come under attack this week.

News also broke last night that Russia is in the process of purchasing millions of rockets and artillery shells from North Korea in an attempt to alleviate severe shortages currently suffered by Russian forces engaged in Ukraine. This comes after Russia is believed to have purchased military drones from Iran for use in Ukraine.

Opinion? Demand for large defense contractors will remain inelastic. Many contractors remain in contact with their key moving averages and though down, are in a far better technical position than broader large cap equity markets. In fact, Northrop Grumman (NOC) is still trading near the top of the chart. Raytheon Technologies (RTX) , however, has moved, almost in isolation, toward (and beyond) established support. 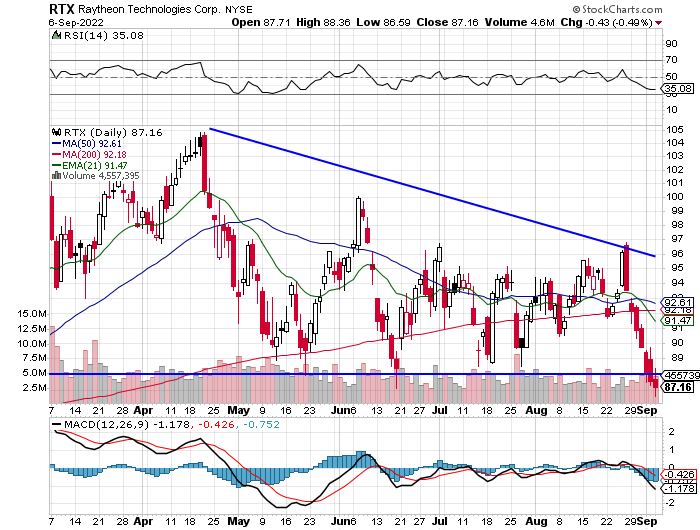 You have here an underdeveloped "descending triangle" that appears to be potentially producing a downward thrust ahead of actually closing the pattern. If there is not some support shown in the short-term, the pattern will be considered broken, and an exit trade will have to be best implemented. Capital would then be re-allocated across the space.

Get an email alert each time I write an article for Real Money. Click the "+Follow" next to my byline to this article.
TAGS: Economic Data | Economy | Investing | Markets | Stocks | Technical Analysis | Trading | Defense | Software & Services | Technology | China