The rapid revaluation of Netflix (NFLX) is well underway. With a third straight nasty drop, Netflix bulls have lost sight of $400 and now have to contend with a huge level at $260. Examining the last five years hints at a very important end of the year for Netflix. A time when it desperately needs buyers of its stock while at the same time facing the onslaught of major competition.

Even Netflix knows it is in for a battle with Apple  (AAPL) and Disney (DIS) starting this holiday season. Amazon, nor any traditional cable network, are mentioned in the streaming war conversation, but they aren't "also-rans." Amazon has the capital fire-power to turn up the heat if they want to join in the fun. I don't believe they will make a move to try and take a position in the top three, but Bezos isn't one to shy away from competition. In the same breath, he's also been good about backing away in a timely fashion if the fight turns in favor of the competition.

Netflix contends it is going to continue to do what it always does. The company will create and center/contend around "binge-able" shows. We are a nation that loves to binge, but when relying on hits, Netflix runs the risk of more traditional media/content valuation. The media landscape has been reset with streaming, but I believe it will find a home between traditional media valuations and the recent highs of Netflix. Unfortunately, Netflix likely remains on the high side of that thinking.

The company has enjoyed solidarity in the streaming market giving it pricing power with consumers. Given Apple and Disney's aggressive pricing structure entering the streaming arena, Netflix's ability to increase prices is now threatened. Additionally, it will have to compete more aggressively to acquire content at a time when some former content is now off-limits. All the advantages Netflix once held over the market are being removed brick by brick. 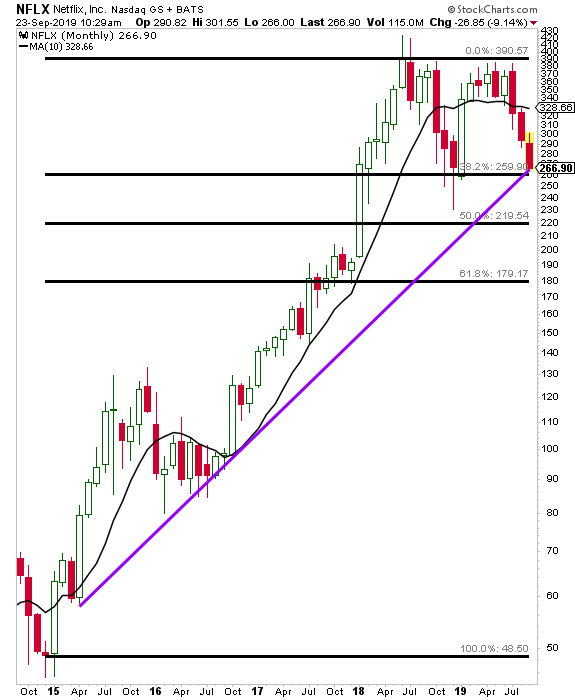 Back to the importance of the $260 level. As we approach the end of September, note on the monthly chart how the $260 level acted as strong support in late 2018. $260 is also the support level for the bullish uptrend dating back to 2015. Furthermore, $260 was also the launching pad for the move to $400. Needless to say, there are high stakes this week for the stock.

Unfortunately, there isn't much support for bulls until the sub $200 level. It is possible, a Fibonacci level around $220 would come into play, which also ties well to the intra-month lows in late 2018. Should $260 fail, then I would suspect we'll retest those late 2018 lows in the $220-$230 area before find buyers.

If we hold $260 come close on Monday next week, then we could see an oversold bounce to kick off October, but if we close under $260 this month, Netflix bulls should be prepared for the potential of another 15% downside.

Get an email alert each time I write an article for Real Money. Click the "+Follow" next to my byline to this article.
TAGS: Investing | Stocks | Technical Analysis | Trading | Movie Production | Movies | Television Production/Distribution | Stock of the Day