I haven't written a serious piece focusing on Tesla (TSLA) since 4/21, the morning after the firm released it's first quarter numbers. The stock had closed at $1,071 ahead of earnings and would trade as high as $1,092 that day. Those of you with really sharp memories will recall that I came in that morning short the name... small from trading through the overnight, not from any place of conviction. That short was soon covered. If only I had known that I had a tiger by the tail at that time.

This past Friday night, the stock closed at $703.55, up 13.4% from it's late May lows, but still off some 39% off of it's April highs. There has been so much that has transpired in between, from CEO Elon Musk's adventures into potentially acquiring perpetual social media underperformer Twitter (TWTR) , to Musk's "super bad feeling" about the economy expressed in an email this past week, where he also announces that "Tesla will be reducing salaried headcount by 10% as we have become overstaffed in many areas."

Musk further confuses by announcing that the 10% reduction does not apply to anyone actually building cars or battery packs or installing solar. Musk made sure that hourly workers knew that kind of headcount would increase. Oh, and you may have seen the comments about getting remote workers back to the office.

Remember, Tesla blew away expectations for the first quarter. The firm posted adjusted EPS of $3.22 (GAAP EPS: $2.86) on revenue of $18.76B. The adjusted bottom line number beat Wall Street by more than a buck and the top line print was good for annual growth of 80.6%. Automotive revenue increased 87% to $16.86B, of which regulatory credits accounted for $679M.

... Tesla had produced 305,407 vehicles during the quarter, while delivering 310,048 and stated that it still expected to achieve 50% average annual growth in vehicle deliveries. Of course, Tesla stipulated that the rate of growth would depend upon that capacity, and efficiency of the firm's operations as well as the stability of the supply chain. That stipulation, with shutdowns in China, obviously would persist into the current quarter and probably beyond.

For the current quarter, a consensus of 22 Wall Street analysts is for adjusted EPS of $2.15 within a range spanning from $1.65 to $3.00, on revenue of $18.1B within a range spanning from $15.9B to $20.75B. At consensus, the quarter would be good for year over year earnings growth of 48% on revenue growth of 51%. It's all about overcoming supply constraints, and keeping the factory doors open while trying to keep expenses down as Tesla traverses the second half of the second quarter. Obviously there is some pressure, as Musk is openly talking or writing about the tough environment.

Tesla posted free cash flow for the first quarter of $2.14 per share. That was four straight quarters of positive free cash flow and seven of eight. This left Tesla with a rather impressive balance sheet. The firm ran with a net cash position of $18.013B, inventories of $6.691B, and current assets of $29.05B. This measured up well against current liabilities of $21.455B, which left the firm with a healthy current ratio of 1.35. Even sans the entry for inventories, the firm would be left with a quick ratio of 1.04.

Total assets of $66.038B easily outweighed total liabilities less equity of $30.632B. That liability number included $2.253B in long-term debt, and $2.714B in capital leases. The firm could pay for all of this today out of pocket if it chose to do so. Tesla ended the quarter with a tangible book value of $32.46 per share, easily the highest TBV per share in the firm's existence.

On Monday morning, according to Dow Jones, in a letter from Elon Musk's lawyer Mike Ringler to Twitter, Musk is stated to believe that "Twitter is transparently refusing to comply with its obligations under the merger agreement." This refers to Musks' request for more data regarding the number of spam and fake accounts on the social media site.

Wall Street now is left to ponder if this goes to court, if Musk moves to terminate his agreement to acquire the firm... if Musk were to find his way out of that deal, obviously this would be seen as a positive for Tesla stock. 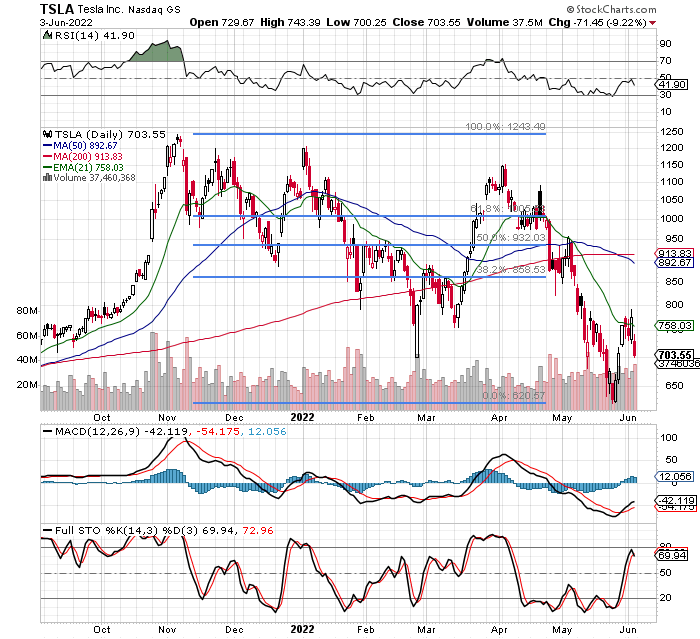 This chart is still sending a number of mixed messages. Obviously, the stock has been mired in a downtrend, with the lower trendline dropping more quickly than the upper line. Relative Strength comes into the new week at a neutral reading, while the full stochastics oscillator is already close to looking overbought. The daily MACD has offered up a bullish looking crossover by the 12 day EMA over the 26 day EMA, but both of those averages remain deeply negative.

That said, as far as the risk/reward proposition is concerned, while always risky, there is a lot less risk and a lot more reward visible at the 57 times forward looking earnings that the stock traded at this morning then there was at the 92 times it traded at back on 4/21.

While I am still somewhat uncomfortable at 57 times, I am more than prepared to play this name from the long side for trading purposes as early as this morning, while incrementally building an investment focused "core" long position. The shares need to retake the 21 day EMA at $758. That's the first key and could act as pivot. The second step would be to approach the Fib level at $858, but let's not get ahead of ourselves. Tesla is still a long way from correcting the downward slope of the 50 day SMA ($892). I think I can be patient with this. As the CEO has inferred, the economy appears to be on my side.

Get an email alert each time I write an article for Real Money. Click the "+Follow" next to my byline to this article.
TAGS: Earnings | Economy | Investing | Markets | Stocks | Technical Analysis | Trading | Elon Musk | Electric Vehicles