The whole picture is a little confusing, yet spectacular in both the complexity of concept and simplicity in execution. Color me impressed. Tesla (TSLA) , the world's most valuable automaker, reported fourth quarter earnings on Wednesday night. The results speak for themselves. Adjusted EPS of $2.54 easily beat estimates. Revenue generation of $17.72B, was good for annual growth of 65%, and beat Wall Street by more than a cool $1B.

Now, here is the kicker. Tesla produced free cash flow of $2.775B for the quarter, up 48.5% from Q4 2020, and up 109% from Q3 2021. Tesla has become a free cash flow generating machine. The firm now has $17.567B in cash and cash equivalents on the balance sheet and "just" $10.38B worth of current and non-current debt & finance leases as well as other long-term liabilities. Current assets dwarf current liabilities and total assets dwarf total liabilities. In short, this company is kicking tail and the balance sheet is in great shape. (Note: I am currently flat this name.)

Tesla informed investors that the company still needs to finalize the manufacturing permit needed from local authorities for the Berlin gigafactory to start operations. Once in motion, Berlin will deliver vehicles to the European market. Additionally, after final certification of the Austin (Texas) made Model Y, the firm will start delivering vehicles to some western hemisphere customers from that gigafactory.

For the quarter reported last night, Tesla produced 305,840 vehicles (+70%), and delivered 308,650 vehicles (+71%). Models 3 and Y comprised 95.7% of vehicles produced, and 96.2% of deliveries. Models S and X make up the balance. The beauty of the current business model may just be the nearly complete reliance upon two model vehicles in a time of scarcity in necessary components. Simplicity in execution.

CEO Elon Musk, when he wasn't talking about the potential for the Tesla robot, said, "We will not be introducing new vehicle models this year, (it) would not make any sense because we will still be part constrained." Musk acknowledged supply chain and logistics issues that actually held back performance.

Expounding on the thought, Musk said, "If we were to introduce new vehicles, our total vehicle output would decrease. This is a very important point that I think people do not understand. So, last year, we spent a lot of engineering and management resources, solving supply-chain issues, rewriting code, changing our chips, (and) reducing the number of chips we need."

Not a lot in the way of guidance. The company stuck with it's multi-year view for delivery growth averaging 50% annually. Tesla did add that the firm expects hardware-related profits to be accompanied with an acceleration in software-related profit this current year. The firm did also mention that it wants to make fully automated driving a priority. 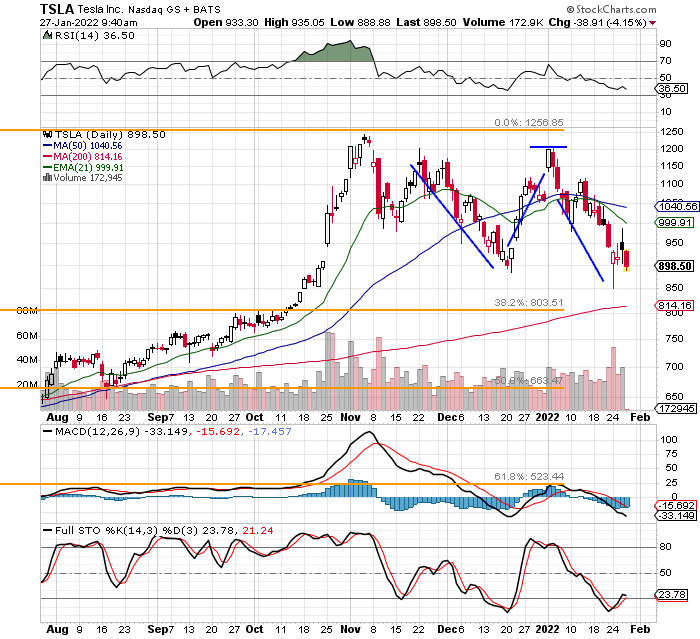 My opinion really depends on what TSLA does in the short-term. The stock is trying to build a double bottom. If the shares can build the right side of the pattern, the pivot would be $1,208, which probably seems a long way off and could be tough to get to in a rising rates environment. Remember, even with improving sales and improving professional opinion, these shares still trade at 96 times forward looking earnings.

Should the pattern that I think I see in development fail, Fibonacci support does not kick in until roughly $803, which would be a 38.2% retracement of the rally from the lows of March 2020 to the late 2021 high.

A trader with the means to tolerate some risk could...

Notes: The trader sets up the possibility of purchasing 100 shares at $900 with a net basis of $906, and a maximum net profit (at expiration) of $144. In order to pay for most of that bull call spread, the trader has sold exposure to equity risk at the $750 level. If that were to happen, the trader's net basis for those shares would be $756.

Get an email alert each time I write an article for Real Money. Click the "+Follow" next to my byline to this article.
TAGS: Earnings | Investing | Stocks | Technical Analysis | Trading | Automotive | Electric Vehicles