Tesla (TSLA) is the 'Stock of the Day' at Real Money. After the close yesterday the company reported its Q4 numbers. Traders have bid up the stock this morning as they focus on the Non-GAAP EPS of $2.14 which beat estimates by $0.38 (detractors of the company have focused on the GAAP EPS of $0.58 which missed by $0.26.)

We last looked at the charts of TSLA on January 8th when we wrote, "Yes, TSLA has made a big upside move in the back half of 2019, but it is not extended when compared to the 50-day moving average line. TSLA could make a sideways consolidation pattern at any time but traders and investors should consider it a potential buying opportunity or at least an opportunity to raise stop protection to below the lows of the pattern. Can TSLA double from here? How much faith in Point and Figure targets do you have?"
Let's check on the charts again with prices now trading about 8% higher in early market trading.
In this daily bar chart of TSLA, below, we can see that prices have soared higher since early October. A number of upside price gaps (or price voids if you like) have been left as prices have leapt higher. The trading volume has expanded from August along with the rising price pattern and chart watchers love to see that winning combination.
The On-Balance-Volume (OBV) line started to rise in earnest in early October and its rise tells us that buyers of TSLA have been more aggressive with more volume being traded on days when the stock has closed higher.
The Moving Average Convergence Divergence (MACD) turned bullish back in September when it moved above the zero line.

In this weekly bar chart of TSLA, below, we went back five years to show the potential size of the base. After tens of thousands of hours of looking at charts and reading many books on the subject I have learned to use a price forecasting technique of taking a multiple of a base level.
Many bases are easy to "read" but with TSLA the question is what level to use. Do we take $180 or $240? or even $300 as the key level of the base and then look at a double, triple or even a bigger multiple of the base? Prices have already doubled from any of these levels so are we going to see a "five-bagger" from the $240 area? We live in interesting times.

In this Point and Figure chart of TSLA, below, we can see a potential upside price target of $643 which could be reached today. Keep your seat belts on low and tight. 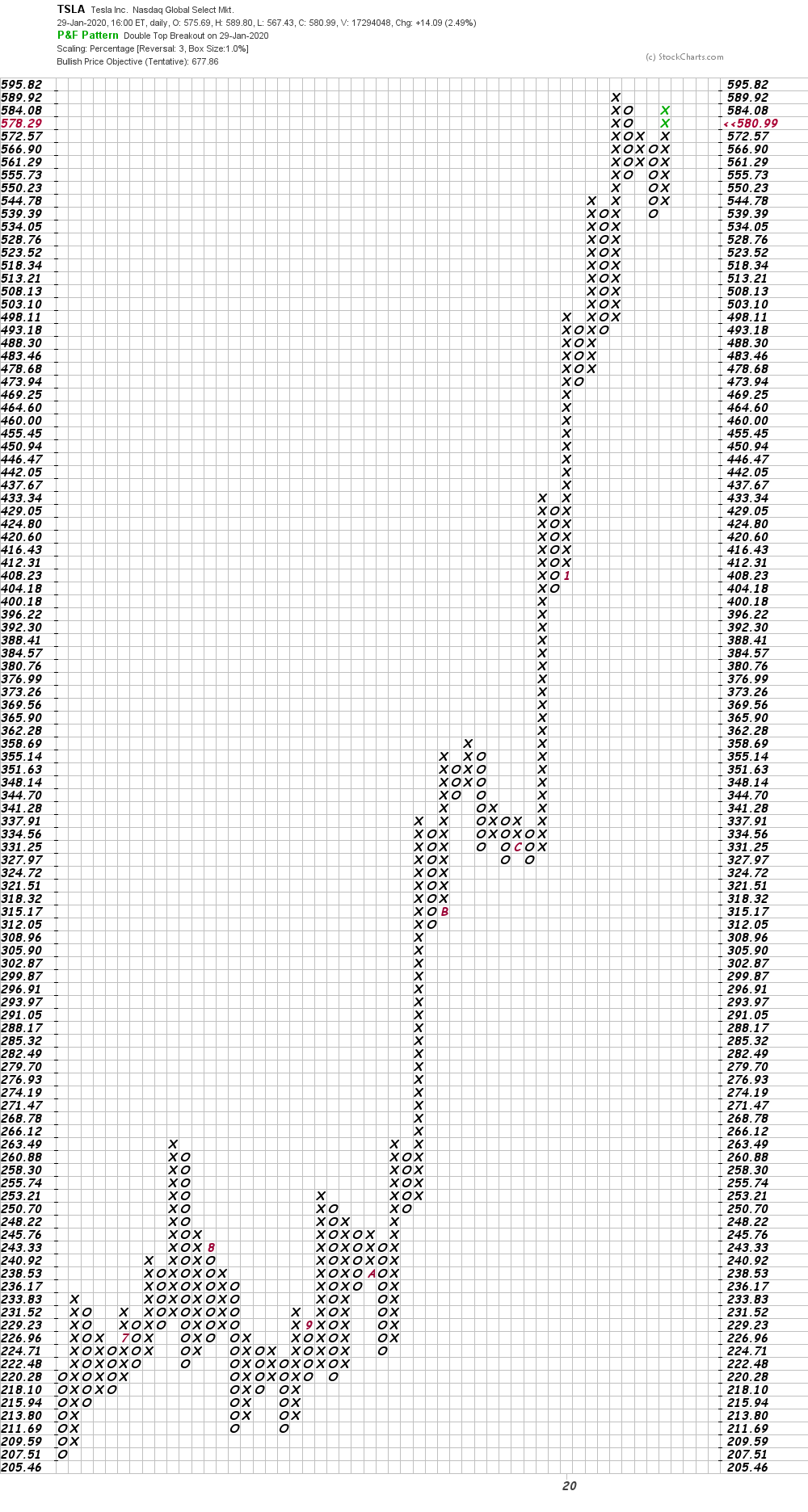 Bottom line strategy: Think of TSLA as a small door that investors are pushing money through. Prices can get pushed to ever higher levels as shorts cover and others pay up for growth.
Get an email alert each time I write an article for Real Money. Click the "+Follow" next to my byline to this article.
TAGS: Earnings | Investing | Stocks | Technical Analysis | Trading | Automotive | Technology | China | Stock of the Day