February 24th. That's the day that Russia invaded Ukraine. One gallon of regular unleaded gasoline cost U.S. consumers an average of $3.54 according to AAA. That average stands nearly a dollar higher just three weeks later. According to MarketWatch, searches for electric vehicles popped some 112% from February 24th through March 8th on Cars (dot com), which is a news and pricing website that covers both electric vehicles and traditional ICE (internal combustion engine) powered vehicles. Breaking that down, searches were up 130% for used electric vehicles and up 83% for new EVs.

WTI Crude is down almost 5% as investors hope that peace has a chance in eastern Europe. Still, related front month futures trade above $104 per barrel. No wonder interest in electric vehicles is high. Interest was high before there even was a war that brought sanctions that ultimately impacted what had been the world's largest exporter of crude. Orders for new vehicles manufactured by Tesla (TSLA) experienced a 100% increase in certain areas of the nation hardest hit by rising gasoline prices, according to Electrek.

Fact is that Tesla cannot keep up with demand. Piling up new orders does not increase or speed up the ability to deliver. The firm's facilities in Fremont, CA and Shanghai, China have been running below capacity due to shortages of various parts, and Covid. New facilities in Texas and Germany are not yet on-line, and probably will take time to ramp up their ability to produce. Knocking on the next door helps little. Few pure EV manufacturers other than Tesla can produce vehicles at acceptable scale. Legacy auto makers like Ford Motor (F) , and General Motors (GM) have had to curtail the taking of orders for several popular electric vehicles in order to allow their capacity to build said vehicles a chance to catch up.

This would seem a good problem to have. Well, let's just say that it's better (a whole lot better) than there being a lack of interest.

Yet, the shares were already in a downtrend by then, and even reporting a wonderful quarter really did nothing more than temporarily pause the selling. TSLA was considered "overvalued" and a "growth" stock. The firm guided in the vague way it always does, toward delivery growth averaging 50% annually going forward. On Wall Street in 2022, overvalued, growth stocks are sold. Even now, TSLA still trades at 75 times forward looking earnings. Not cheap by any stretch. It was trading at 96 times on January 27th. The firm reports the first quarter on or about April 22nd. Wall Street looks for adjusted EPS of $2.25, which would compare well to $0.93 for the year prior equivalent period, and revenue of $17.6B, which would be good for growth of about 69%.

Some of you may remember this chart... 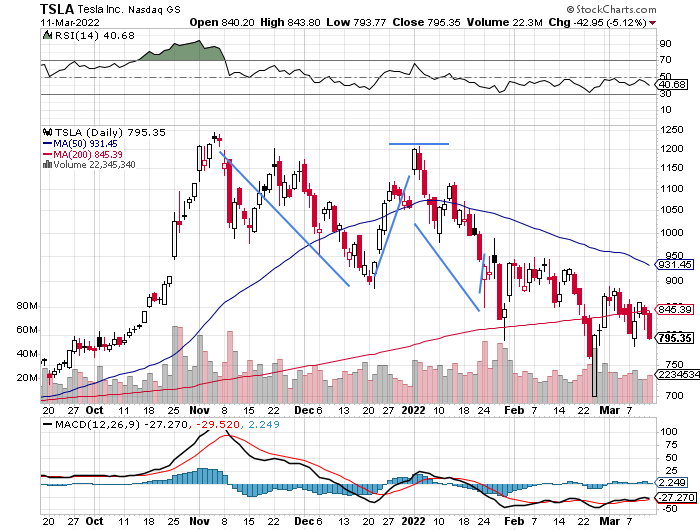 ... the right side of the double bottom pattern that we spoke of on January 27th never developed. Now, we draw a downward sloping Pitchfork instead of that incomplete "W"... 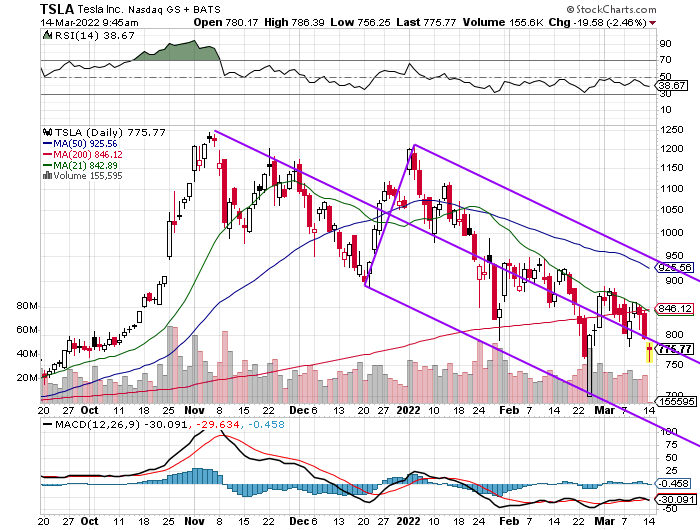 I am long the shares, but only about half of what I was a hundred dollars ago. Is it time to add the sold shares back on. Do I cash in the balance of my position even though now I would be doing so at a loss? What I think I am going to do is sell the last of my equity stake at $750 if it trades there... as that is my panic point, and that's why I have panic points... so I can act with cool precision when I have to.

(Ford Motor is a holding in the Action Alerts PLUS member club. Want to be alerted before AAP buys or sells F? Learn more now.)

Get an email alert each time I write an article for Real Money. Click the "+Follow" next to my byline to this article.
TAGS: Earnings | Investing | Markets | Stocks | Technical Analysis | Trading | Automotive | Electric Vehicles