What a day Tuesday was. Not just for the Nasdaq Composite, not just for the tech sector and any specific industry within said sector, but for Tesla (TSLA) , a tech company that resides within the automobile industry within the Consumer Discretionary sector. Are we at the point where nearly every business is in some way a technology of a technology reliant business? I think so, but that sure does make blurry any lines drawn in the sand... or flows into equity allocation. That said, on a day where "growth" rocked, Tesla rocked most of all. The shares tacked $110.58 onto Monday's closing price, or a cool 19.6%, landing at $673.58 by Tuesday's closing bell. I see the shares trading higher still in early morning trade on Wednesday. Let's talk about this.

The Way I See It

There were three big catalysts for Tesla's wild day. The first of these were simply capital flows based on a move (at least for now) toward unwinding the recent rotation out of growth and into value, or into cyclicals. This flow was reinforced by the perception of stronger demand than had been expected for the $58 billion worth of Three Year Notes put to market by the U.S. Treasury on Tuesday afternoon.

Secondly, Tesla had a great month of February... in China. According to the China Passenger Car Association, Tesla delivered 18.3K vehicles in China for the month, up 18% month over month. This is a time of year, considering the Lunar New Year that auto sales typically tail off in China, and in fact they did for many of China's homegrown electric vehicle manufacturers such as Nio (NIO) , and Xpeng (XPEV) . There are expectations that penetration of electric vehicles in China, currently 4.5% of that market, could more than double by next year. It is key to note that Tesla recently introduced the Model Y to China and did cut pricing as well.

The third catalyst came not just from the world of opinion, but what was said (or written) and who said it. Three highly rated analysts made their voices heard on Tuesday.

We will begin with New Street analyst Pierre Ferragu who has been quite successful in regards to this name. Ferragu upgraded Tesla from "neutral" to "buy" on Tuesday while increasing his target price from $578 all the way to $900. Ferragu sees the firm further ramping up manufacturing capacity, and finding itself "in a position to deliver 2M units in 2023 and deliver earnings of $12, more than 50% above current expectation."

Next up would be Adam Jonas of Morgan Stanley who rates five stars at TipRanks and has had success with Tesla, though not quite at the level of a Pierre Ferrgu. Jonas reiterated his "overweight" rating on the stock and his $880 price target. Interestingly, in his notes, Jonas points out that "There are many players rolling out large and sophisticated internet of cars AI/ML (artificial intelligence / machine learning) fleets." Tesla has a fleet of roughly 1.3 million vehicles currently in service, expected to rise to somewhere greater than 30 million by 2030. Jonas sees manufacturers of fleets of connected vehicles as potentially captive customers for LEO (low earth orbit) operators. Hence the connection between Tesla and SpaceX becomes potentially important.

Lastly, the market mover himself... Five star analyst Daniel Ives of Wedbush. Ives took note of the news out of China, and believes that from a run-rate perspective that the firm could be on track to be on a 200K plus trajectory in China for this year. Ives sees this better than anticipated performance in China as key to hitting the firm's goal of 750K to 800K units for the year. Ives has a "hold" rating on TSLA and he has since the cows came home. That said, his price target remains $950, which is not the highest on the street. There are several four figure targets out there, but it is up there, especially for a hold. 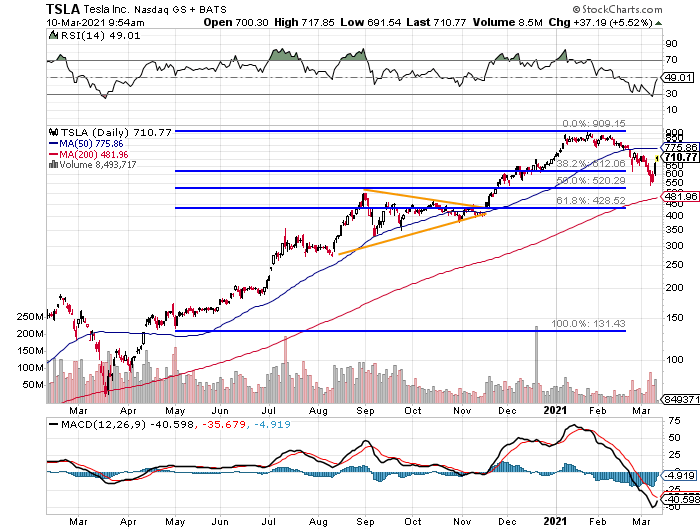 I see two things going on here. We have the incredible run inspired by the stock split last year and beyond. The associated breakout was indeed signaled by a closing pennant that lasted from August into November. Didn't see it in real time? I did not catch that entire move either. Now... bigger picture, the shares had become overbought and retraced about 50% of the move from the post-Covid selloff low of early last May through the highs of 2021.

The shares did not turn until becoming technically oversold and now approach the 50 day SMA, as being $65 away in Tesla is not the same as being $5 away in many other large cap stocks. Missed this move? Not my son. That's my way of saying "me too." So what do we do now? I hate to chase. You all know that. In fact, I'd rather just forget about the name than do that. Tesla is expected to report in late April.

Are you willing to buy TSLA at the 200 day SMA? More specifically... would you be willing to expose yourself to potential equity risk at $480 with an expiration date of say... April 23rd. If you are willing to be at the risk of having to buy 100 shares at $480 on that date, then you are in some luck. April 23rd TSLA $480 puts are still paying a rough $10. Not trading much, but that is the implied price. That's a cool one thousand bucks in the back pocket if the put options expire worthless. If the trader does have the shares put to him or her at $480, that trader better have $48,000 handy, but at least net basis would be $470 not $480.

If nervous, the same trader could also purchase one TSLA $400 April 23rd put for roughly $5. Cuts the credit from the premiums in half, but at least losses are capped should absolute disaster strike. That's a little aggressive?

Okay, I have one for the especially conservative. How about selling an April 23rd TSLA $250 put for about $1.50. That's $150 for the pocket, with the underlying stock trading about $450 above the strike price with six weeks or so to go. Sure beats in terms of risk management (my opinion), laying out almost $150 in premiums ($15K) for an April 23rd TSLA $700 straddle.

Get an email alert each time I write an article for Real Money. Click the "+Follow" next to my byline to this article.
TAGS: Investing | Markets | Options | Stocks | Technical Analysis | Trading | Automotive | China | Analyst Actions | Electric Vehicles

I See No Signs of Leakage in Air Products & Chemicals

In fact, the charts of APD are bullish. Here's what they say.