Is there a trade here? Is there? A trade to be made going into Tesla (TSLA) earnings? Will there be a volatile reaction? History tells us that there certainly could be. The stock is up 3.36% year to date. Not awful for some stocks. That said... the S&P 500 is up 11.9% for the sake of comparison. The Dow Jones Utility Average is up 6.2% for crying out loud. That's right... if you bought Tesla and only Tesla at year's end 2020, and your friend bought nothing but the (XLU) SPDR ETF, your friend is kicking your tail. Oh, and most utilities pay a nice dividend, so the comparison is more lopsided than when measured in mere performance. That said, traders don't line up to play Consolidated Edison's (ED) numbers. Investors might, but not traders.

What To Look For?

Tesla reports the firm's first quarter after the closing bell this (Monday) afternoon. I see consensus for EPS around $0.78, up from $0.24 (post-split) for the year ago period. Revenue is expected to land close to $10.34 billion, which would be good for growth of 72.6%. The market has already priced in some good news. In early April, Tesla reported Q1 deliveries of 184.8K total vehicles versus the street's expectations of a rough 168K. These deliveries required significant investment. The firm is expected to report Capex of more than $1 billion, squeezing automotive gross margin from 27.7% a year ago to a probable 24.2%-ish.

There is some negative news out there that is difficult to quantify. The crash in Texas doesn't help. The ban from the military complex in China is more problematic. These are not necessarily Q1 stories, but they most certainly are post-earnings conference call questions if the community of analysts is doing their jobs, and when it comes to Tesla, they all do try to bring their "A" game.

We also know that Tesla invested $1.5 billion in bitcoin in February. Bitcoin ended March at close to $59K per. This is probably going to show up as handsome unrealized gains in the first quarter numbers. The fact that bitcoin has come in since then may or may not impact just how much that position is priced in. This is an unknown.

What is also unknown is how CEO Elon Musk guides in terms of forward looking deliveries as the competition from other EV manufacturers, and traditional manufacturers are getting more deeply committed to the EV space, and likely take market share. Just last week, Morgan Stanley banged out a piece discussing a potential "multi-decade" tailwind for stocks impacted favorably by new climate friendly policies. When it came to electric vehicles, Tesla was mentioned as an "overweight", but so were General Motors (GM) and Fisker (FSR) . Personally, I am long Ford Motor (F) , and probably a lot more Ford than I would be, if I did not like where they were headed, EV-wise. 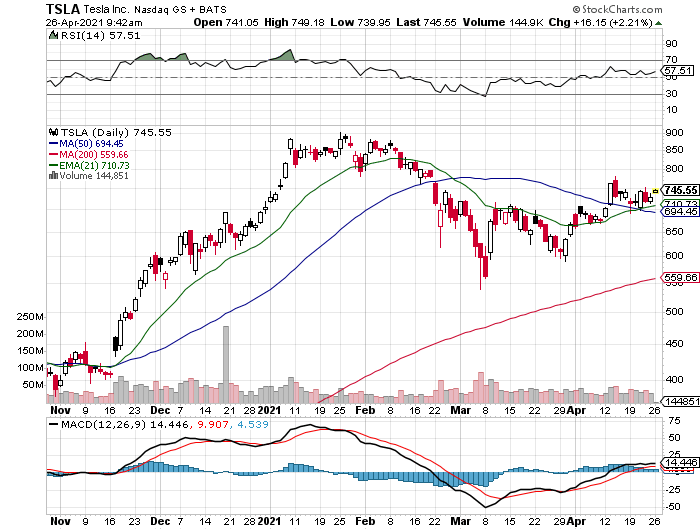 The chart, in my opinion, is not overtly bullish nor is it bearish. What I do see for now, is that as the 21 day EMA crossed over the 50 day SMA, which I consider to be the swing traders' mini golden cross... that support shifted from that 50 day SMA to the 21 day EMA. This is a mildly positive development as long as the algos are on board. So far so good.

Note 1: This trade sets up for a medium-term bull. The trade works in the opposite for a bear.

Note 2: Prices are moving rapidly for TSLA and for related options. Obviously real-time adjustments will have to be made by the reader after publication.

Note 3: Selling the call almost completely subsidizes the purchase of the put.

Note 4: Through this Friday, profit is limited to $13 ($755-$742), which is little more than 1.7%. That said, protection has been purchased for the short term at $730. This makes the max loss here through Friday... just $10 (per share), or 1.3%. After Friday, unless you roll over some of these options trades, you're on your own. That said, an equity stake has been taken, if that was the intent, while successfully managing risk around an earnings release.

Get an email alert each time I write an article for Real Money. Click the "+Follow" next to my byline to this article.
TAGS: Earnings | Investing | Options | Stocks | Technical Analysis | Trading | Automotive | E-Commerce | Elon Musk