Tesla Inc. (TSLA) is the Stock of the Day here at Real Money. We reviewed the charts and indicators of TSLA earlier this week, saying, "Prices are stretched to the downside but barring a tweet or rumor we are likely to see TSLA trade still lower in the days ahead." TSLA is indicated to open lower this Thursday morning, with several sell-side analysts in recent days giving a "worst-case" outlook for the stock. Let's check the charts one more time.

In this daily bar chart of TSLA, below, we can see that prices have continued to fall and have slipped further below the declining 50-day moving average line. Trading volume has increased sharply on four occasions in April and May (so far) signaling more-intense selling.

The daily On-Balance-Volume (OBV) line continues to dive lower and lower -- telling us the sellers of TSLA have been more aggressive, with heavier volume being transacted on days when the stock closes lower. The trend-following Moving Average Convergence Divergence (MACD) oscillator remains bearish and pointed still lower.

In this weekly bar chart of TSLA, below, we can see that all our favorite indicators are bearish -- the slope of the 40-week moving average line is negative. The weekly OBV line is pointed down and the MACD oscillator is well below the zero line. The older chart support around $180 looks like it could be broken soon and that would open the way to still further declines.

In this long-term Point and Figure chart of TSLA, below, we can see a major top pattern, which could result in a major decline in the weeks and months ahead. 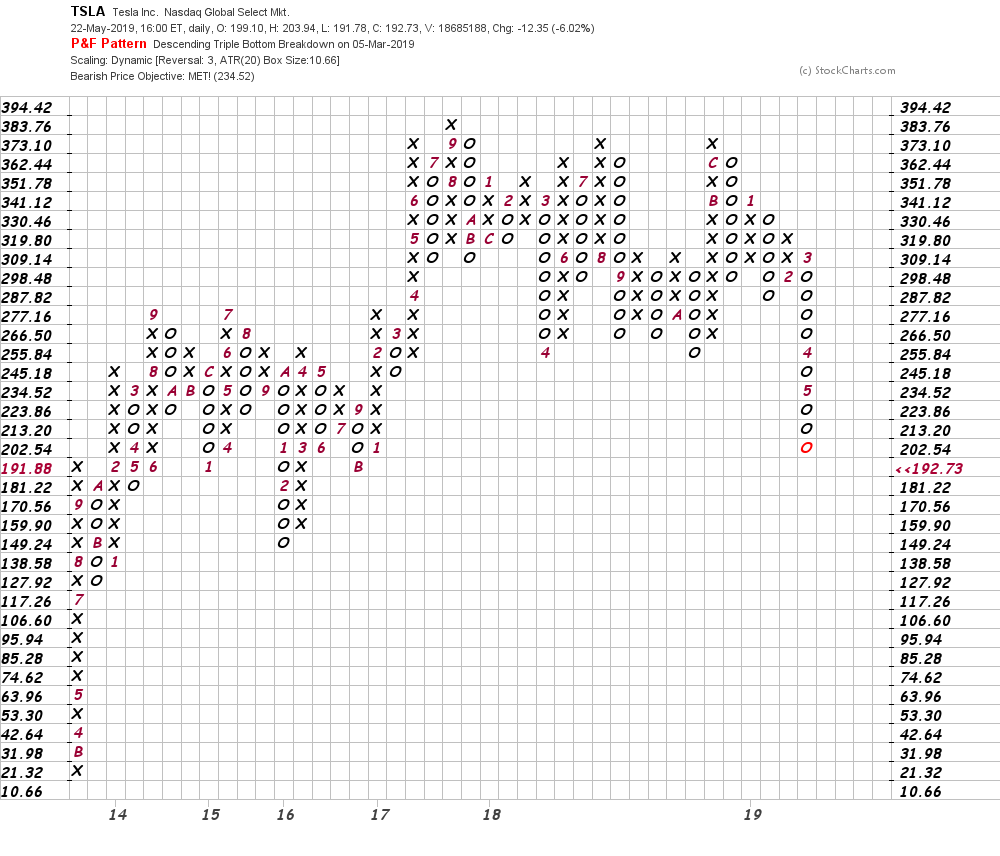 Bottom line strategy: From my casual review of media reports, it seems like a number of former Tesla supporters have changed their tune. Ron Baron may still be a believer, but this humble technical analyst sees the risk of much-lower prices ahead. Only consider a low-mileage, short-term lease.

Get an email alert each time I write an article for Real Money. Click the "+Follow" next to my byline to this article.
TAGS: Investing | Stocks | Technical Analysis | Automotive | Stock of the Day