How can you not be fascinated by Tesla (TSLA) ?

The stock and bonds appeared to be the midst of a death spiral, and, oh, wait a minute, what do we have here? A leak! An email leaking bullish delivery numbers hits the wires as the stock is struggling pre-market, down some $10.

It reads like a subplot from the movie Margin Call.

But this is real life.

And the numbers may very well be legit, but the whole thing is suspect. It's not the release of the information, because I can absolutely understand a company wanting to pre-announce good news if things appear to be going poorly. No, this is about the "how." Why not simply pre-announce? Maybe even do it in a professional manner, you know, like via a press release?

There's a simple reason why Telsa, more specifically, Elon Musk, did not do that. He was seeking maximum impact on the stock price. Unfortunately, the company's CEO has become more obsessed with the stock price than running a company. I won't argue he isn't a conceptual genius. The cars produced at Tesla are the future of the automotive industry, at least in concept. However, I don't believe the emotional tug-of-war with Tesla stock won't end until Musk simply moves into a chairman position and someone else is running the day-to-day operations.

Bulls are seeing a much needed bounce on Thursday. The stock has already given up 7% on the week and is down 22% over the past three weeks. For anyone asking where support is in terms of price: I have no idea. Well, at least when we examine the last two years of trading. Support was lost at $260, so the freefall of late makes sense. The stock has hit an oversold level in 2019 not seen this extended for years. The bounce today, even without the Elon leak, is logical. While oversold can easily become more oversold, traders shouldn't expect a cult stock to simply roll over and die. 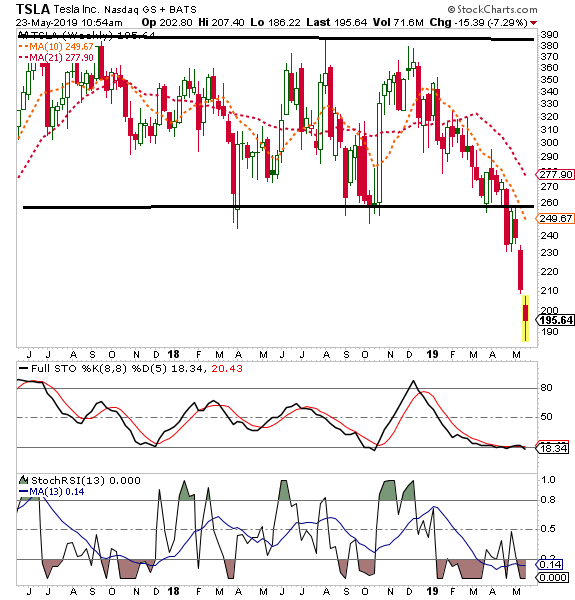 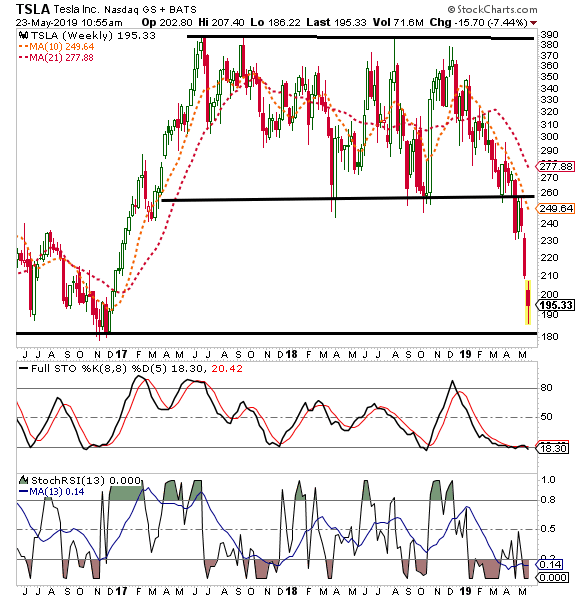 Tesla is on my 'do not trade' list at the moment. There is way too much emotion to unpack in the story. Markets are emotional enough in themselves, I think there are "easier" places to trade, but if Tesla is one that draws you in, then watch the $180 level as well as $205 in the short-term for support and resistance while expanding that resistance out to $230 for views beyond the summer.

Get an email alert each time I write an article for Real Money. Click the "+Follow" next to my byline to this article.
TAGS: Investing | Options | Stocks | Technical Analysis | Trading | Automotive | Stock of the Day