Disappointment? Far from it. It can only be Tesla (TSLA) , where the firm reports after the closing bell, the stock trades up more than 4% overnight, and shareholders take it as a pedestrian move. Can you imagine feeling that way about almost every other stock in a portfolio? Not too many, anyway. That's for sure. Maybe Amazon (AMZN) , Nvidia (NVDA) , or Netflix (NFLX) , but the list is short.

What now? How to value this name as it evolves into something different than it was? For years, this was either a cult stock, or debt/cash flow story... depending on one's point of view. Over time, this name became a production story that retained the cult status, as well as the sometimes troubling fundamentals. Then, Tesla became a profitability, or lack thereof story. Finally, there was no lack thereof. Tesla has now posted five consecutive quarters of profitability. The firm has done this while rapidly increasing both productivity as well as margin. They have done so while managing the debt load, through a period of international expansion despite having to navigate the firm's way through a trade war that was then followed up by a global pandemic.

They call CEO Elon Musk eccentric. They mock him. Heck, I have mocked him. To tell the truth, I don't really understand him. That's because I am not on that level. I may not be that smart, but I am smart enough to know that I should be, and I am... impressed.

Tesla went to the tape on Wednesday evening with the firm's third quarter financial performance. Tesla reported adjusted EPS of $0.76. This result beat the street by roughly 16 cents, and presents a third consecutive quarter of year over year earnings growth greater than 100%. As for revenue generation, Tesla put a print of $8.771 billion to the tape. This number beat consensus by almost half a billion dollars, and shows annual growth of 39.2%. Operating margin landed at 9.2% supported by automotive gross margin of 27.7%. Wall Street was down around 24.1% on this metric.

This profitability was positively impacted by strong demand, improved fixed cost absorption, and better expense management. Oh, and the sale of regulatory credits. Yes, it is true. The firm still relies somewhat heavily on these sales. Of the total revenue number ($8.771 billion), revenue described as "Automotive" came to $7.611 billion, and $397 million from within that number came from the sales of regulatory credits. These sales actually decreased 7% sequentially, but remain up 196% annually.

That said, revenue is revenue. Keeping the product affordable is and could be an issue going forward as global economies struggle to balance recovering economies with clean energy driven agendas. Free Cash Flow for the quarter was an impressive $1.395 billion, up 234% from the second quarter and 276% from Q3 2019. The cash (and equivalents) position now stands at a whopping $14.5 billion.

The firm produced 145K vehicles for the quarter and delivered 139K of them. Though not backing off of the firm's goal of delivering 500K vehicles for the full year, Tesla would have to deliver roughly 180K vehicles over the year's final three months to get there. The firm has recently increased capacity at the Fremont, California facility to 500K units annually. Production is expected to reach capacity either shortly before or shortly after year's end.

Capacity at the Shanghai facility has been increased to 250K, while prices for the Model 3 have been reduced in the region. China has been a demand driver for the firm, and the facility has had to add a third production shift. Construction is apparently progressing on third and fourth facilities in Berlin, Germany, and Austin, Texas. Berlin is expected to contribute to production as early as 2021.

In addition, Musk stated later in the call (in response to questioning) that the firm has a dozen or so startups within the company, though there is no talk of spinning anything off. The firm is known to be working on a "Full-Service Driving" beta that will not be reliant upon full time connectivity. Whether this works (one would think it would) for a future robo-taxi system or not could allow one Uber (UBER) or one Lyft (LYFT) driver to manage his or own fleet of up to 10 vehicles. 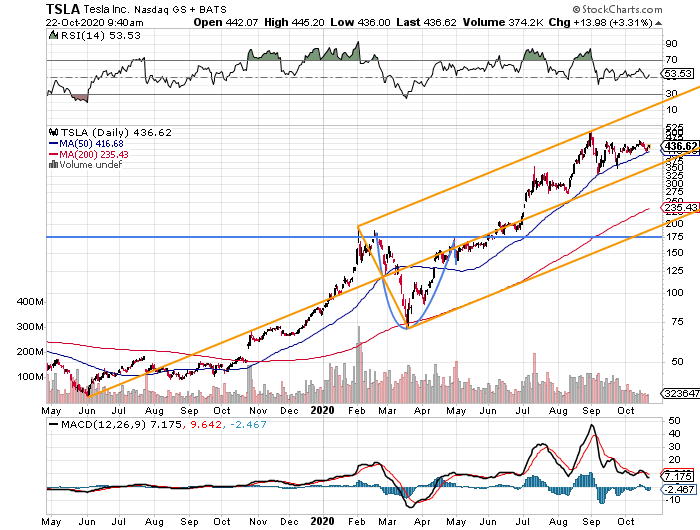 Readers may remember this chart. It still works like a charm. Tesla has colored within the lines created by this Pitchfork, which is now almost a year and a half old. In fact with the support of that blue line (50 day simple moving average), TSLA has managed to stay within the confines of the Pitchfork's upper chamber.

I know. A number of well-knowns reiterated "buy" ratings on this name over the past 12 hours. The $500+ price targets are pouring in. We have had a $502 price target on the share since the split. That's too easy. It's simply the August high. My aggressive target is $600, making use of the $502 spot as pivot. Not exactly the bullish case of $800 that Dan Ives of Wedbush mentioned in his response to these earnings, but I will take it.

Tesla. This is not a trade. This is an investment.

(Amazon and Nvidia are holdings in Jim Cramer's Action Alerts PLUS member club. Want to be alerted before Jim Cramer buys or sells these stocks? Learn more now.)

Get an email alert each time I write an article for Real Money. Click the "+Follow" next to my byline to this article.
TAGS: Earnings | Economy | Investing | Markets | Stocks | Technical Analysis | Trading | Automotive | Elon Musk | Electric Vehicles