On Friday, a story caught my eye. Readers will quickly recall the piece I wrote in regards to the relationship between BP PLC (BP) and Palantir (PLTR) . I kind of liked what both firms are doing, but not enough to pull either trigger just yet. For Palantir, I saw the lock-up period expiration coming just three days after next Tuesday's expected earnings release as a reason to wait. I did not see this morning's deal between Palantir and IBM (IBM) coming and that news had the stock up 10% prior to the opening on Monday morning.

Another story caught my eye this morning. I am sure that by now most readers have read something on the disclosure that Tesla (TSLA) had invested $1.5 billion in cryptocurrencies and would start accepting bitcoin for payment in exchange for Tesla products "in the near future". You likely remember that about a week ago, during a Clubhouse audio app session, Tesla CEO Elon Musk mentioned that he was a supporter of bitcoin and that bitcoin was "really on the verge of getting broad acceptance by conventional finance people." Musk was also among a number of high profile individuals that tweeted about a far lesser known cryptocurrency known as dogecoin last week as that much cheaper (per coin) crypto option soared, at least in percentage terms.

I have had a very solid track record trading Tesla, at least since I stopped trying to short this name a couple of years ago. Still, as well as the trading has gone, I have no position right now, and in hindsight, investing would have been smarter than trading this stock. One has to wonder just how positive this news is for either Tesla or bitcoin. Both are up nicely on the news. I think that the investment in bitcoin is a show of faith by Tesla in this crypto specifically. That has value. At the end of the fourth quarter, a three month period where Tesla ran with free cash flow of $1.9 billion, and increased the firm's net position of cash and cash equivalents by $4.9 billion to $19.4 billion. So, they have some cash and they need something to do with it. Guess Tesla could have paid the shareholders a dividend, but last year's stock split certainly managed to pad the pockets of the firm's investing public.

So, why not? If bitcoin turns negative once again, the stock's valuation could take a hit, but then again, the size of the investment as a percentage of the firm's cash position is not enough to ruin the firm, and the bitcoin story is better than it once was, at least potentially as the U.S. Treasury Department and the Federal Reserve Bank, along with multiple global central banks, are doing everything they can to not so overtly debase their fiat currencies. If that's how Elon feels, then his alternative investments would be best placed in either bitcoin or physical gold. By accepting bitcoin in exchange for either goods or services, Tesla also promotes the broader ownership of this crypto, and bitcoin is global, meaning it has a major reason for being, getting wealth out of a failing currency and into something exchangeable anywhere else in the world in any other reserve currency. The only catch there... would be that any consumer making use of bitcoin as a medium of exchange would also in effect be betting against bitcoin in U.S. dollar (or any fiat) terms.

I think now, maybe more than projected production levels, or sales. Tesla may be valued to at least some degree, up or down with an investor view of bitcoin as part of the equation. In other words, for those who have not gone the extra mile of investing in bitcoin directly, investing in Tesla could be a semi-covert way of doing so. This could also reignite interest in shorting the name. Yes, bitcoin has proven itself useful as a means of transferring wealth and doing so quite anonymously. That said, regulatory risk will be an issue moving forward as the central banks face the prospects of competing with a currency-like product that remains outside of the traditional money supply. In other words, cryptocurrencies, useful ones in particular, render central banks less powerful. 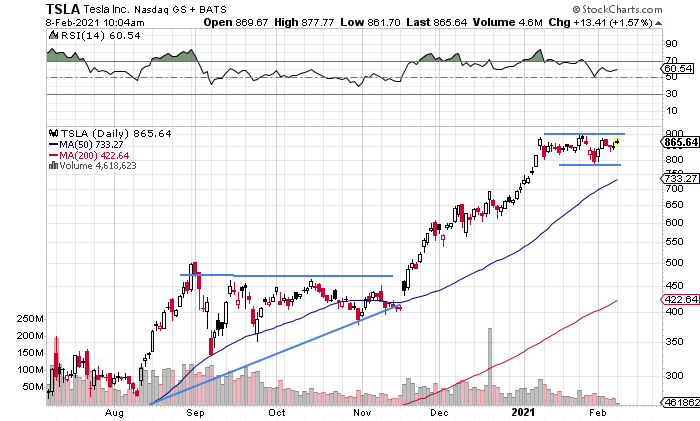 Readers will note on this chart that the shares broke out of an ascending triangle in mid-November and have entered into what looks like it could be the start of a period of basing consolidation starting with the new year. Relative Strength has eased as the shares of TSLA trade at a "mere" 18% premium to their own 50 day simple moving average, which is kind of cheap for Tesla going back to that November breakout. Is this it? The last gasp of an incredible rally? I think that may be premature. Let me show you a longer chart that I drew up for you way back and have now extended. 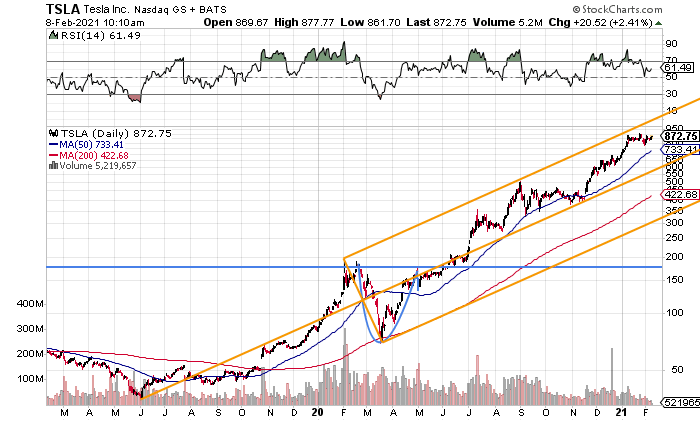 The old Andrews' Pitchfork model, dating back to the lows of May/June 2019... that I think I may be close to the last market participant making use of, show that not only is the upward trend still very much in tact, but the shares remain firmly entrenched in the upper chamber of the pitchfork as they have been since taking the central trend line back in late June 2020. Even pulling back to the 50 day line may occur, and I would not be surprised if it did... that would do nothing to change the trend. You give me the 50 day line, I'd be a buyer, and bitcoin would have nothing to do with it.

As for bitcoin, I have traditionally preferred physical gold, as an alternative store of wealth. That said, I must admit that should bitcoin find use as a medium of exchange, it would attain at least one of the three characteristics of "money" that gold, at least for now, appears to have lost. Both can act as stores of wealth. Both are divisible. Neither is widely used as a medium of exchange. If bitcoin were to gain a broader use there, that would be a huge feather in bitcoin's cap. Then again, gold is still good if the lights go out, bitcoin would be just gone. Maybe the argument is not bitcoin vs. gold, but bitcoin in addition to gold. Maybe.

Get an email alert each time I write an article for Real Money. Click the "+Follow" next to my byline to this article.
TAGS: Bitcoin | Currencies | Federal Reserve | Gold | Investing | Markets | Stocks | Technical Analysis | Trading | Cryptocurrency