With valuations for many cloud software names at levels last seen several years ago, and with many of these firms still delivering impressive top-line growth, a recent uptick in software M&A might prove a sign of things to come.

Notably, the Anaplan and SailPoint deals were inked before the bloodletting in cloud software/SaaS stocks that began last November had fully run its course. As a result, the deals featured valuations higher than those currently sported by most SaaS companies. SailPoint is being acquired for an enterprise value (EV - market cap minus net cash) about 12 times its fiscal 2023 (ends in January 2023) sales consensus, and even following a slight discount negotiated in June by Thoma Bravo, Anaplan was sold for an EV equal to about 13 times its fiscal 2023 sales consensus.

Admittedly, Zendesk, which was under pressure to sell by activist Jana Partners after an initial sale effort failed to attract a buyer, is being acquired for an EV equal to just 6 times its fiscal 2023 sales consensus. For its part, Avalara has an EV equal to 8 times its calendar 2022 sales consensus, after surging in response to the Vista Equity report (it's worth noting here that many think Avalara, which has been steadily taking share in its core market, would require a meaningful premium from current levels to agree to a sale).

Depending on their growth rates, addressable market sizes, margins and competitive positions, different SaaS companies will fetch different buyout multiples, of course. And given the across-the-board multiple-compression that tech stocks have seen in recent months, as well as how much Treasury yields have jumped, it's possible that not too many SaaS firms will now fetch the kinds of multiples that Anaplan and SailPoint obtained.

But either way, there are now quite a few software firms that are posting 20%-plus sales and billings growth, have high gross margins and which arguably have market-leading offerings, that sport lower multiples than what Avalara currently trades for, never mind what Thoma Bravo was willing to pay for Anaplan and SailPoint.

The fact that most enterprise software firms now get the majority (if not the lion's share) of their revenue from recurring revenue streams that (compared with traditional software license sales) provide a measure of recession-protection naturally appeals to potential acquirers.

So does the fact that -- as IT spending forecasts drive home -- spending on software, security (much of which is now software-related) and cloud services has been steadily outgrowing total IT spending, and that CIO surveys pretty consistently show various software fields as areas likely to see high spending growth. See, for example, the following results from Credit Suisse's Mid-Year CIO Survey: 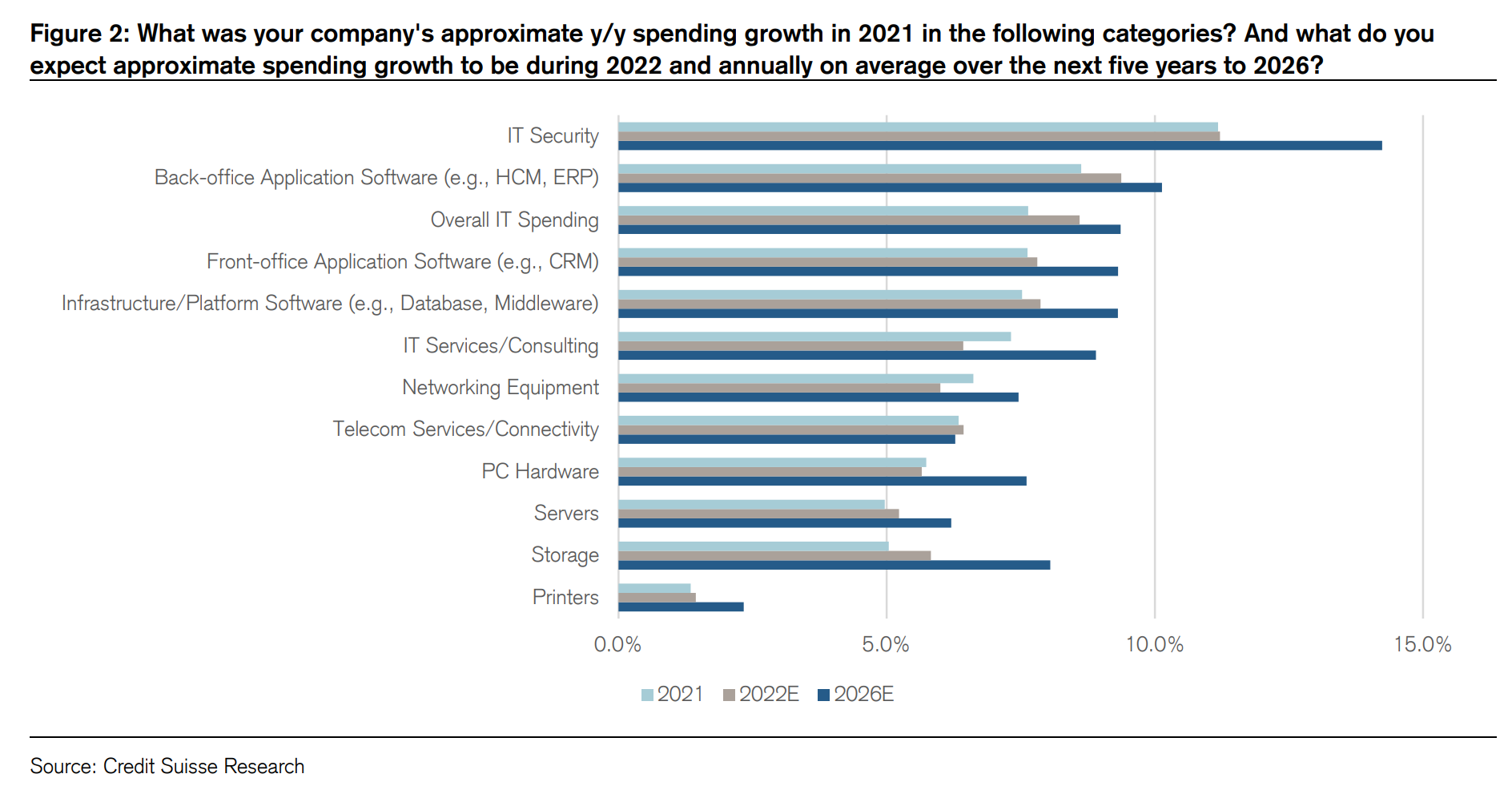 Along with PE firms, the massive multiple-compression that many high-growth SaaS companies have seen could pique the interest of some of the tech giants (at least if they feel regulators would likely sign off on a particular deal), or of a larger, pure-play, enterprise software firm such as Salesforce.com (CRM) , ServiceNow (NOW)  or SAP (SAP) .

While it's impossible to know for sure just which companies will ultimately get buyout offers, ongoing M&A interest in reasonably priced software firms that are still seeing healthy growth could easily provide some valuation support to the group after a very rough eight-month stretch.

Get an email alert each time I write an article for Real Money. Click the "+Follow" next to my byline to this article.
TAGS: Mergers and Acquisitions | Private Equity | Fundamental Analysis | Investing | Software & Services | Technology