Snap Showed Some Improvement, But It's Not Out of the Woods Yet

Expectations were quite low for Snap Inc. (SNAP) going into its Q4 report, and that, together perhaps with a short-squeeze, is helping the company rise over 20% in after-hours trading after it topped sales and EPS estimates.

The good news: Revenue rose 36% annually to $389.8 million, beating a $377.2 million consensus thanks to a 37% increase in average revenue per daily active user (DAU) to $2.09 -- still a low number for a platform averaging over 30 minutes per day in time spent, with close to half of all DAUs in North America. And free cash flow (FCF) improved to negative $149 million from a year-ago level of negative $197 million, as revenue growth and lower operating expenses offset higher ad revenue-sharing expenses.

On the flip side, DAUs (though slightly better than analyst estimates) were flat sequentially and down by 1 million annually to 186 million -- interim CFO Lara Sweet added on the earnings call that Snap is "cautiously optimistic" about DAUs, and doesn't expect a decline in Q1, which last year saw a 4-million user sequential increase. And in spite of the Q4 beat, Snap is only guiding for Q1 revenue of $285 million to $310 million (up 24% to 34% annually), which at a $297.5 million midpoint is slightly below a $299.5 million consensus. 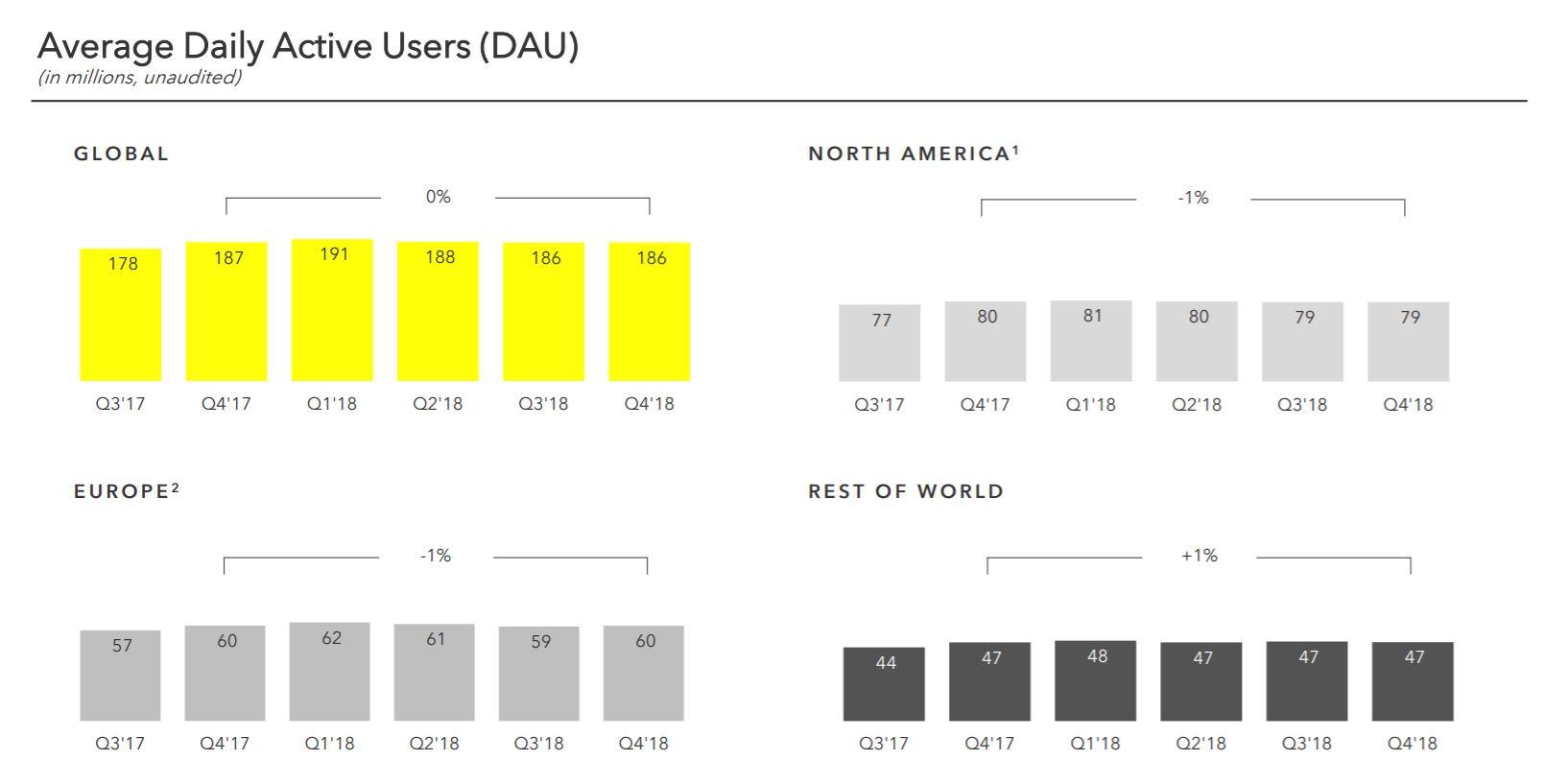 Moreover, though FCF is improving, cash burn remains substantial and will likely be higher in Q1 (a seasonally weaker quarter for ad sales) than it was in Q4. Snap, which ended 2018 with a little under $1.3 billion in cash, still has a ways to go before it can turn cash-flow positive, as it continues dealing with a high cost structure -- though down 9% annually, operating expenses still totaled $238 million in Q4, and cloud infrastructure expenses rose slightly to $134 million.

Meanwhile, as Snap continues relying heavily on ads run against Snapchat Stories for revenue, Facebook (FB) just disclosed that it now has over 500 million DAUs for Instagram Stories and over 2 million advertisers for its various stories services, which it's now getting more serious about monetizing. While CEO Even Spiegel insisted on the call that growing advertiser interest in vertical video ads will benefit both Snap and rivals, Facebook has some major advantages in this fight, from its scale to its user data to its ability to support ad campaigns that cover both stories and feed ads.

Snap did show some signs of improved execution in Q4. However, with shares still trading for close to 7 times its 2019 revenue consensus following its post-earnings pop, Snap still isn't especially cheap for a company that's struggling to grow its user base and continuing to burn a healthy amount of cash.


T-Mobile Is Running a Shrewd Campaign to Win Over Regulators

The biggest argument against regulatory approval of the T-Mobile/Sprint deal has been pretty simple: T-Mobile US (TMUS) and Sprint (S) generally offer the lowest prices of America's four nationwide mobile carriers, and consumers have benefited greatly in recent years from the price pressure they've exerted on Verizon (VZ) and AT&T (T) , as well as each other. Merge the companies, and the pricing environment could look very different.

On Tuesday, T-Mobile made its strongest attempt yet to address such fears, promising that the post-merger T-Mobile will offer "same or better rate plans for our services as those offered today by T-Mobile or Sprint" for three years (no word on what happens after the three years are up). The promise follows one -- made at the time of the April 2018 merger announcement -- to "invest up to $40 billion in [T-Mobile and Sprint's] new network and business" during the three years following the merger's closing.

T-Mobile has also promised to deliver an average 5G data rate of 444Mbps, and a peak rate of 4.1Gbps, if the deal is approved. In addition, the company says that (with the help of Sprint's spectrum assets) it will eventually offer 5G home broadband services to over 52% of U.S. zip codes. Sprint, meanwhile, has been arguing that it will be in a pretty dire competitive position if the merger isn't approved -- this is an argument that probably has some merit, but it's worth adding that T-Mobile isn't Sprint's only potential savior.

All in all, T-Mobile is running a pretty shrewd PR campaign to get the Sprint deal approved. John Legere's company has been nothing if not a good marketer in recent years as it has steadily taken share from rivals. T-Mobile's aggressive pricing and willingness to address wireless pain points in areas such as mobile data pricing, taxes/fees and roaming charges definitely have a lot to do with these share gains, but the "Un-carrier" identity that it has crafted for itself, one in which it portrays itself as the edgy and consumer-friendly alternative to Verizon and AT&T, hasn't hurt either.

Just maybe, T-Mobile's PR and marketing savvy helps the company convince regulators to let it merge with Sprint. Though the FCC hasn't announced when it will render its verdict on the deal, T-Mobile said in November the merger could close as soon as Q1 2019.

On Monday afternoon, Mac Rumors reported that Apple (AAPL) is in talks with Roku (ROKU) about having Roku's streaming devices support Apple's AirPlay 2 protocol, which lets iOS and macOS devices stream content to compatible home hardware from Apple and others. It adds AirPlay 2 support is likely to arrive through a software update for Roku devices, and that the update "would likely extend" to the many smart TVs that have the Roku OS.

Lending credibility to the report: Last month, Apple announced that smart TVs from Samsung, LG, Sony and Vizio would be getting support for AirPlay 2, and also that Samsung TVs will contain an iTunes app for watching movies and TV shows purchased via the iTunes Store. Previously, Apple TV set-tops were the only devices that could receive video content via AirPlay.

AirPlay 2, it should be noted, also supports home speakers from the likes of Sonos (SONO) and Bang & Olufsen, in addition to Apple's HomePod.

Why is Apple suddenly willing to support AirPlay and (in Samsung's case) an iTunes app on platforms that directly and indirectly compete with Apple TV? Growing services revenue might be part of the motivation: The more devices that can play Apple's music and video content, the more incentive consumers have to purchase or subscribe to that content.

Another potential factor, however, is that Apple TV still only has a modest share of the over-the-top (OTT) streaming hardware market. Research firm Parks Associates estimates Apple TV accounted for 15% of the U.S. streaming media player installed base in Q1 2018, less than Roku's 37%, the Amazon Fire TV platform's 25% and the Google Chromecast's 21%. This estimate, it's worth adding, doesn't include smart TV operating systems and video game consoles used for streaming.

Differences in pricing strategy -- namely, that Apple wants to turn a profit on selling Apple TVs, while Roku and Amazon.com (AMZN) are treating their hardware as loss leaders and looking to monetize them via services -- likely has much to do with Apple TV's current market position. Whereas the 4K Apple TV starts at $179 and the non-4K version starts at $149, Roku and Amazon's cheapest 4K streaming sticks go for $40 and $50, respectively.

With Apple having no interest in losing money to grow its Apple TV installed base, and with the company prepping a video service that's reportedly due in April, it might have decided it's better off partnering with living room hardware makers to make it easier for the company's giant iOS installed base to stream video from their mobile devices to their TV sets.

Regardless of Apple's motivations, Roku certainly can't complain about having the chance to support AirPlay 2. If a similar deal isn't inked between Apple and Amazon due to the reluctance of one or both parties, it would give Roku, which I think is still in the early stages of monetizing an active account base that's now above 27 million, another selling point for its platform.