Corning Earnings Show Not All Component Suppliers Are The Same

Between inventory corrections, softening Chinese demand, weak smartphone sales and a digestion period for cloud capital spending, there's plenty of bad news to go around for the companies supplying chips and components to tech and electronics hardware makers. But like Xilinx's (XLNX) earnings last week, Corning (GLW) 's Q4 report is a reminder that some firms are still capable of delivering healthy top-line growth in this environment

Corning, whose shares are up over 10% on Tuesday, beat Q4 estimates on the back of 15% annual sales growth, and largely offered an upbeat 2019 sales outlook. While the company's core display glass business is only seeing modest growth (it depends heavily on a slow-growing TV market), Corning's Optical Communications (optical fiber) segment grew 26% and is forecast to grow by a low-20s percentage in Q1 and a low-teens clip over the whole of 2019. 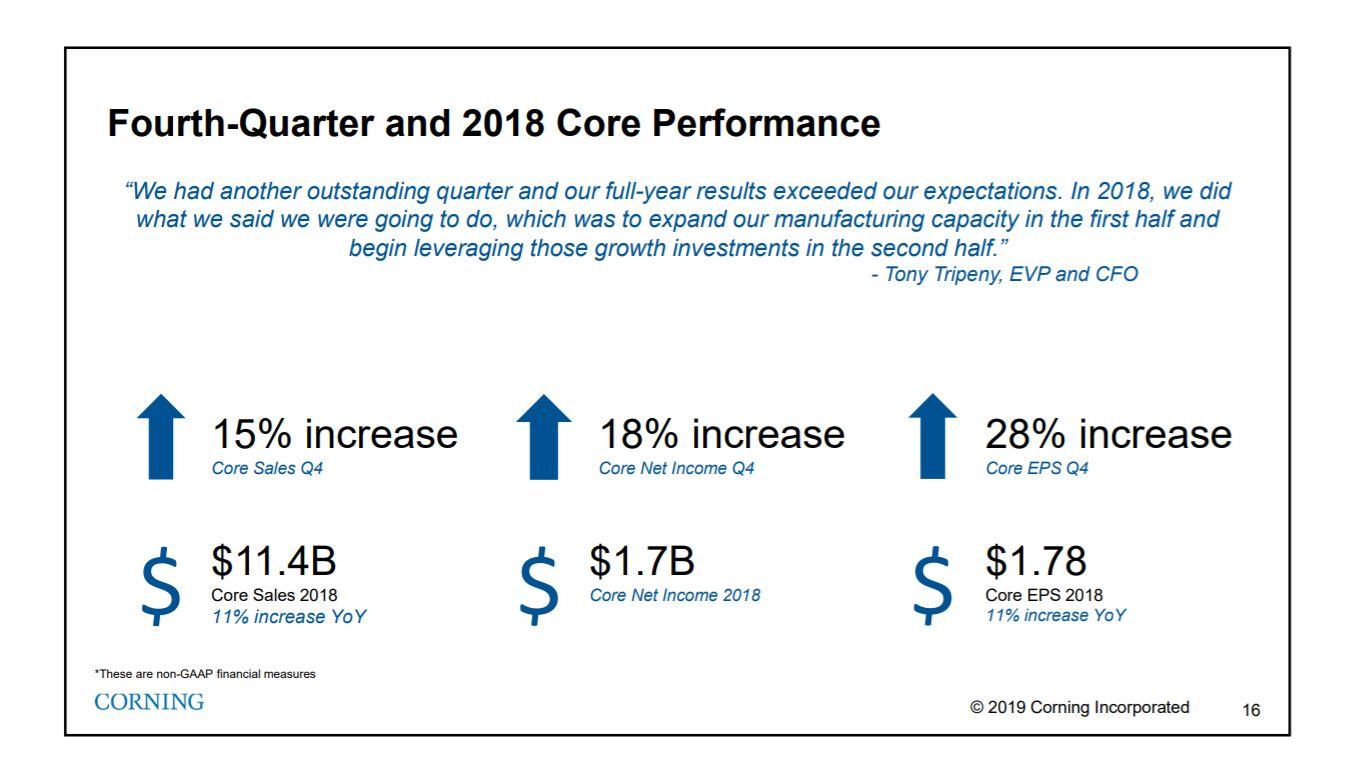 Corning had a pretty strong Q4.

The company noted on its call that efforts by wireless carriers to deploy more fiber within their infrastructures -- a trend that's likely to accelerate as 5G rollouts pick up -- is providing a lift to Optical Communications sales, as is healthy data center demand. Meanwhile, Corning's Environmental Technologies unit, which makes ceramic substrates for gasoline and diesel cars, is expected to grow by a high-single digit percentage this year, after registering 10% growth in Q4.

And in spite of a weak smartphone market, Corning's Specialty Materials unit, which supplies Gorilla Glass (display cover glass) to Apple (AAPL) , Samsung and many other mobile OEMs, grew 2% in Q4 and is expected to grow by a mid-to-high single digit percentage in the first quarter of 2019. Rising penetration rates for phones that have both front and back glass panels is helping, as is the adoption of more advanced (and costlier) versions of Gorilla Glass.

Adjusted EPS grew 28% in Q4 with the help of revenue growth, operating leverage and ongoing stock buybacks. Following Tuesday's gains, Corning trades for 16 times a 2019 EPS consensus that's likely to be taken higher as analysts react to its Q4 report. That's not a dirt-cheap valuation, but not an unreasonable one, either, given how the company is performing.

CNBC reports that Jeff Bezos' company is about to launch a new, Amazon-branded, Middle Eastern marketplace that would be separate from Souq.com, the regional e-commerce platform it bought in 2017 for $580 million. The marketplace will initially launch in the UAE, and then in Saudi Arabia.

Given its reputation as a global e-commerce juggernaut, it's easy to forget that nearly two-thirds of Amazon.com's (AMZN) non-AWS revenue still comes from its North American reporting segment. And that as of 2017, 70% of the company's international revenue still came from three markets -- the U.K., Germany and Japan.

Admittedly, that last number is down from 76% in 2016, as Amazon's giant investments in India yield a payoff. But it still drives home how large of an untapped opportunity Amazon, which is coming off a Q3 in which its revenue growth in more established international markets disappointed investors, has in many foreign locales -- even with Alibaba (BABA) and JD.com (JD) likely to remain dominant in China.

In addition to stepping up its Middle Eastern investments, Amazon is trying to grow its footprint in Latin America. Earlier this month, the company began direct e-commerce sales in Brazil for 320,000 products (admittedly, 200,000 of them are books), after having previously opened up a local marketplace. The company has also been busy building out its Mexican fulfillment infrastructure, after having launched a Mexican version of Amazon Prime in 2017.

Local players will continue providing Amazon with stiff competition in some markets -- MercadoLibre ( MELI) is still seeing strong growth in Latin America, and Flipkart, which is now majority-owned by Walmart ( WMT) , remains a major player in India. But as Amazon steadily applies the lessons it has learned in the U.S. and its established international markets, and also leverages its brand, supplier relationships and digital content services, the company should fare well in many of its fights.

Though Dropbox (DBX) is frequently referred to in press coverage as a cloud storage company, calling it merely that doesn't do credit to the large ecosystem of apps and services the company has built around its core storage and file-sharing services, and which help keep many of the corporate teams and small and mid-sized businesses (SMBs) hooked on its platform.

This week, Dropbox decided to take things a step further and buy one of its ecosystem partners, with the goal of cross-selling its services to Dropbox's 12 million-plus paid users. The company is spending $230 million to buy HelloSign, a provider of software and services for handling e-signatures and related document workflows.

Though its share of the e-signature market is smaller than that of leaders DocuSign (DOCU) and Adobe (ADBE) , HelloSign has racked up over 80,000 customers, with many of them (as is the case for Dropbox) consisting of SMBs. With global e-signature penetration rates still pretty low -- last year, DocuSign CFO Mike Sheridan suggested to me that his company has only penetrated about 1% of its addressable market -- there's room for multiple players to succeed.

HelloSign was one of the initial partners for the Extensions platform that Dropbox launched last year -- it goes beyond Dropbox's traditional app integrations by letting users carry out actions (for example, editing photos and PDFs, or sending out a document to be e-signed) without leaving Dropbox's app. And notably, Dropbox engineering chief Quentin Clark says the HelloSign deal represents one part of pursuing a "broader vision" that involves "extending the storage capabilities that are at the core of the Dropbox solution."

Though only time will tell how well the HelloSign deal pays off, it wouldn't be surprising to see Dropbox make additional moves -- whether via M&A or internal R&D -- to offer an expanded array of productivity apps and services that it can promote to SMBs. While Dropbox's decision to not invest in creating a large salesforce to pursue big enterprise deals has left it with a relatively small enterprise market share -- Microsoft (MSFT) and Box (BOX) are bigger players there -- markets might not appreciate how much room the company still has to grow its SMB revenue base, while spending relatively modest sums on sales and marketing along the way.


Verizon's Report Isn't Great, But Is a Positive for Suppliers

For now, Verizon (VZ) , like AT&T (T) , is seeing limited telecom service revenue growth as its wireless unit contends with stiff competition (largely from T-Mobile US (TMUS) ), and its wireline business is stung by both declining voice revenue streams and cord-cutting.

While Verizon's Q4 EPS beat estimates, revenue fell short, with (after factoring in accounting changes) wireless service revenue rising a modest 1.9% to $16.2 billion, and its wireline revenue dropping 3.5% to $7.4 billion. Verizon did (as previously announced) have 1.2 million wireless retail postpaid net subscriber adds, with 873,000 of that consisting of smartphone net adds. However, retail postpaid churn ticked higher relative to a year ago to 1.08%.

Another 277,000 wireline voice connections were lost, as were 46,000 FiOS video connections. Broadband connections rose by 3,000.

The company isn't forecasting major improvements in 2019. Total revenue, which in 2018 benefited from an increase in wireless equipment revenue (it carries a negative margin), is expected to grow by a low-single digit percentage. EPS is expected to be roughly flat, with Verizon noting accounting changes are expected to hurt EPS by 1% to 2%.

All of that has led Verizon's shares to drop 2.1% to $53.94 in Tuesday trading. The stock rallied to new 52-week highs in November, but has gradually pulled back since.

On the flip side, Verizon's equipment suppliers can collectively expect to do more business with the company this year. Big Red is forecasting it will spend $17 billion to $18 billion on capex in 2019, up from $16.7 billion in 2018, as its 5G network rollout commences in earnest.

Incrementally, that's another positive for telecom equipment firms such as Nokia (NOK) , Ericsson (ERIC) , Juniper Networks (JNPR) , Cisco Systems (CSCO) and Ciena (CIEN) . As I wrote on Friday, both 5G rollouts and Huawei and ZTE's woes should act as a boon for telecom hardware makers who have been dealing with a pretty rough capital spending environment in recent years.

In time, Verizon's spending should have a payoff. In general, I'm a fan of new CEO Hans Vestberg's decision to pare back media investments and prioritize investing in Verizon's best-in-class wireless network. However, the payoff won't come overnight.

Get an email alert each time I write an article for Real Money. Click the "+Follow" next to my byline to this article.
TAGS: Investing | Technology | Telecommunications