Sometimes, a smaller tech company's fight against Amazon.com  (AMZN) ends up being far from a winner-takes-all affair.

And in the event that a smaller tech firm's stock gets priced in a way that implies Amazon will do more damage than it's likely to, this can create a buying opportunity.

Stitch Fix (SFIX) , whose shares were rising 6% post-earnings on Tuesday and are now up nearly 50% from their early-September lows, is a good case in point. The online apparel service provider moderately beat October quarter estimates while reporting 21% annual revenue growth and 17% active client growth. Its January quarter sales guidance was a little below consensus, but still implied 21% to 23% growth, and its fiscal 2020 (ends in July 2020) sales guidance, which implies 23% to 25% growth after adjusting for an extra week in fiscal 2019, was reiterated.

Stitch Fix didn't exactly knock the cover off the ball with its latest results and guidance. But from the perspective of investors who were worried about decelerating growth in general, and competition from Amazon in particular, the numbers looked pretty good, particularly in light of Stitch Fix's valuation. 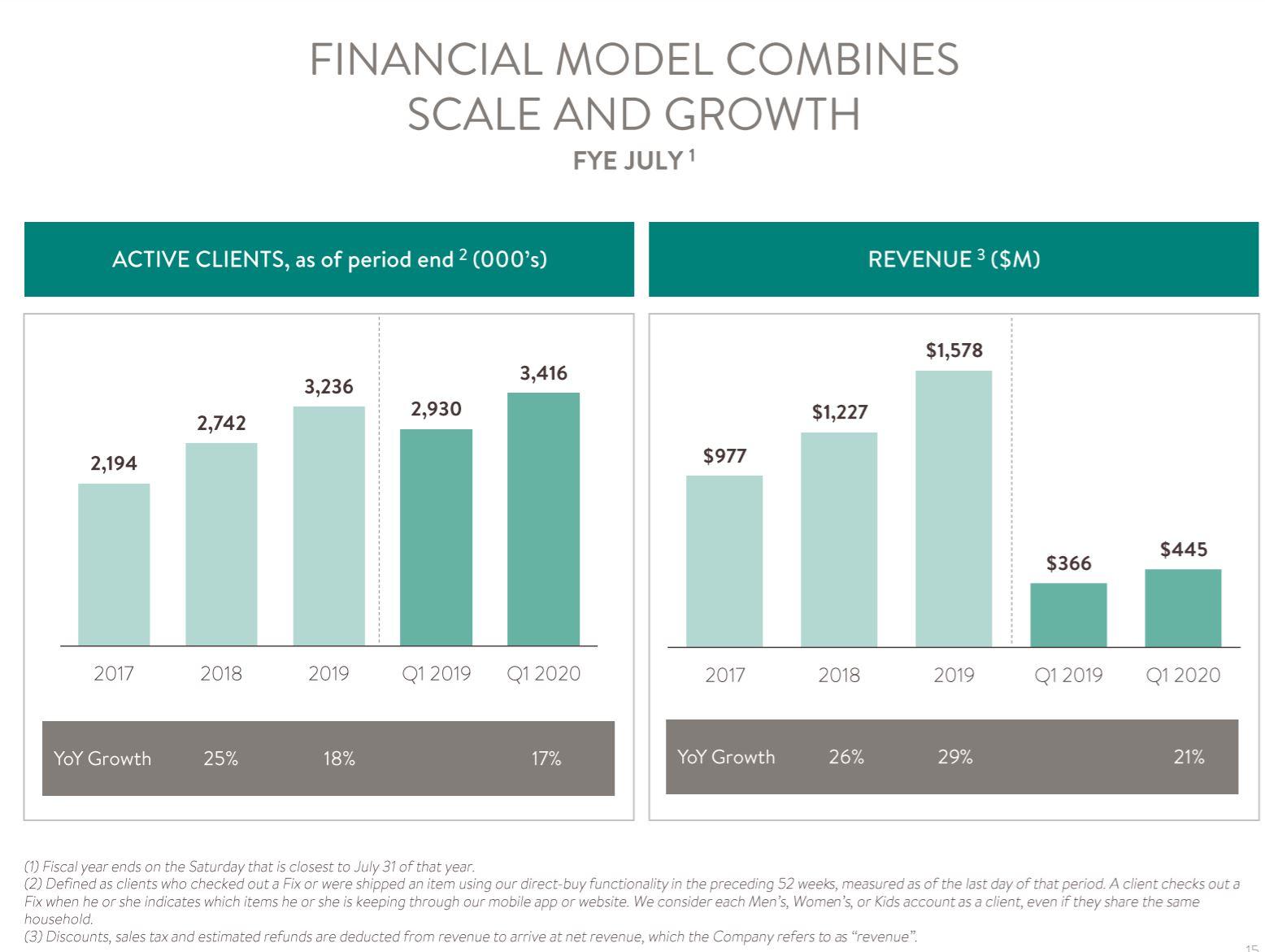 For the time being, Stitch Fix, which charges a $20 "styling fee" (applicable towards apparel purchases) each time a user is delivered a personalized set of apparel items to try out, seems to be weathering this challenge reasonably well. It isn't guaranteed that this will continue over the long run, given Amazon's resources, massive Prime customer base and willingness to offer many Prime services at or below cost. However, as is the case with various other smaller companies battling tech giants, the focus and attention to detail shown by Stitch Fix's management towards it core business has been an important competitive strength.

To some degree, there could be a parallel here with Roku (ROKU) , which continues seeing strong active user growth for its strong growth even as Amazon continues to grow its rival Fire TV platform. And to a lesser extent, there might also be a parallel with Etsy (ETSY) , which wasn't affected much by Amazon's launch of a rival marketplace for handmade goods. Both Roku and Etsy have done a pretty good job of rewarding shareholders who bought at a time when worries about Amazon were more pronounced.

All of this is worth thinking about when considering Elastic's (ESTC) stock today. Elastic, which offers a software platform underpinned by the popular, open-source, Elasticsearch search and analytics engine, was clobbered post-earnings last week. While the company beat sales and EPS estimates, its billings growth slowed some. And while Elastic attributed the billings slowdown to federal deal delays, it served to heighten ongoing concerns about Amazon Web Services' (AWS) own Elasticsearch-powered offerings.

However, as others have argued, Elastic, which has taken steps to prevent AWS and other cloud providers from using its software R&D work for their own services, still has important competitive strengths relative to AWS in certain use cases. Among other things, Elastic can work in a variety of cloud and on-premise environments, and the company has evolved its platform to extend beyond Elasticsearch's core search/analytics abilities and into fields such as application performance monitoring (APM), security information and event management (SIEM), infrastructure monitoring and location data analytics.

Meanwhile, Elastic's once-pricey stock now looks more reasonably-valued, even if it still isn't dirt-cheap. At a time when Elastic is still seeing 40%-plus billings growth and 50%-plus revenue growth, shares trade for less than eight times a fiscal 2021 (ends in April 2021) billings consensus of $637 million.

Like Stitch Fix in recent months, Elastic stock has arguably dropped to a point where it simply needs to hold its own against rival offerings from Amazon, rather than wipe the floor with them. And like a slew of other smaller, highly-focused, tech firms competing against Jeff Bezos' firm, it might be able to do just that.

Get an email alert each time I write an article for Real Money. Click the "+Follow" next to my byline to this article.
TAGS: Investing | Technology |

Chipmaker STMicroelectronics Shows Some Static Ahead of Earnings

STM's charts are a tough read, but let's see what they say when all the pieces are put together.

As We Await Tesla's Results, Let's Assess Whether to Touch Microsoft

Would-be traders and investors need to understand that the software giant's stock isn't cheap by any measure.

It was MSFT guidance that turned the post-closing bell rally into overnight weakness.

The primary issue now is whether MSFT earnings will produce a theme reflected in other reports.