Though chip stocks have sold off hard in tandem lately, some chip companies look much better positioned than others to brush off the demand weakness that's forming in a few end-markets.

Likewise, some enterprise tech companies look well positioned to weather potential IT budget cuts, while others could get hit hard.

To be clear: I still don't think we're heading into a major recession. Not only do the job market and consumer balance sheets/spending still look pretty healthy overall, we're now seeing inflation cool off in some areas where it had been running pretty hot (durable consumer goods, raw materials, shipping/freight costs, and to some extent home prices), even as energy and food inflation remain very high. And the easing of some inflationary pressures could very well keep the Fed from getting too aggressive with rate hikes and balance-sheet reductions.

But with that said, the negative wealth effects created by the carnage seen in both equities and cryptos is bound to affect consumer spending some, as well as (along with higher mortgage rates) slow down the housing market. In addition, high energy/food inflation has begun weighing on discretionary spending by lower-income consumers, and though corporate spending/hiring still doesn't look bad overall, there are pockets of softness in areas such as brand ad spending and hiring activity among tech companies contending with business pressures and/or plummeting stock prices.

In addition, there's now a clear shift in discretionary consumer spending away from durable goods (notebooks, TVs, furniture, sporting goods, etc.) towards travel and hospitality services. And the fact that prices have gone up for things such as flights, hotel rooms and restaurant meals means that consumers partial to spending more on services than goods right now will have less disposable income to direct towards the latter.

In a nutshell, such an environment spells cross-currents for tech investors to navigate. The macro environment isn't as bad as some die-hard bears make it out to be -- and certainly, a lot of bad news has already gotten priced into the shares of many tech companies that are facing some demand pressures. Nonetheless, taking a selective approach towards tech longs -- with a bias towards companies operating in markets likely to see demand hold up well in this environment -- arguably makes a lot of sense.

Among chip stocks, companies whose sales skew towards automotive, industrial and/or cloud data center end-markets, such as Analog Devices (ADI) , Texas Instruments (TXN) or Marvell Technology (MRVL) , could see demand hold up much better than companies that are heavily dependent on consumer tech end-markets, such as Qorvo (QRVO) , Synaptics (SYNA) or (as the Q2 warning it shared on Monday drives home) Himax Technologies (HIMX) .

Within enterprise tech, cloud software providers such as Salesforce.com (CRM) , ServiceNow  (NOW) and Workday (WDAY)  -- many of which now look much less expensive than they did a few months ago -- might see demand hold up better than enterprise tech companies whose sales still depend heavily on traditional, on-premise infrastructures, such as Dell (DELL) , Hewlett-Packard Enterprise (HPE) and IBM (IBM) . Public cloud giants such as Amazon.com's (AMZN) AWS and Microsoft's (MSFT) Azure could also see demand hold up relatively well.

The enterprise software industry's shift towards subscription and consumption-based business models relative to license/maintenance revenue models plays a role here, as does the long-term shift in enterprise IT spend towards software/cloud spending relative to hardware spending. One only has to look at the following data from Morgan Stanley's Q1 CIO survey to see how enterprises faced with IT budget cuts will often prioritize software and cloud spending areas (security software  especially) relative to on-premise spending fields such as hardware, consulting and data center construction: 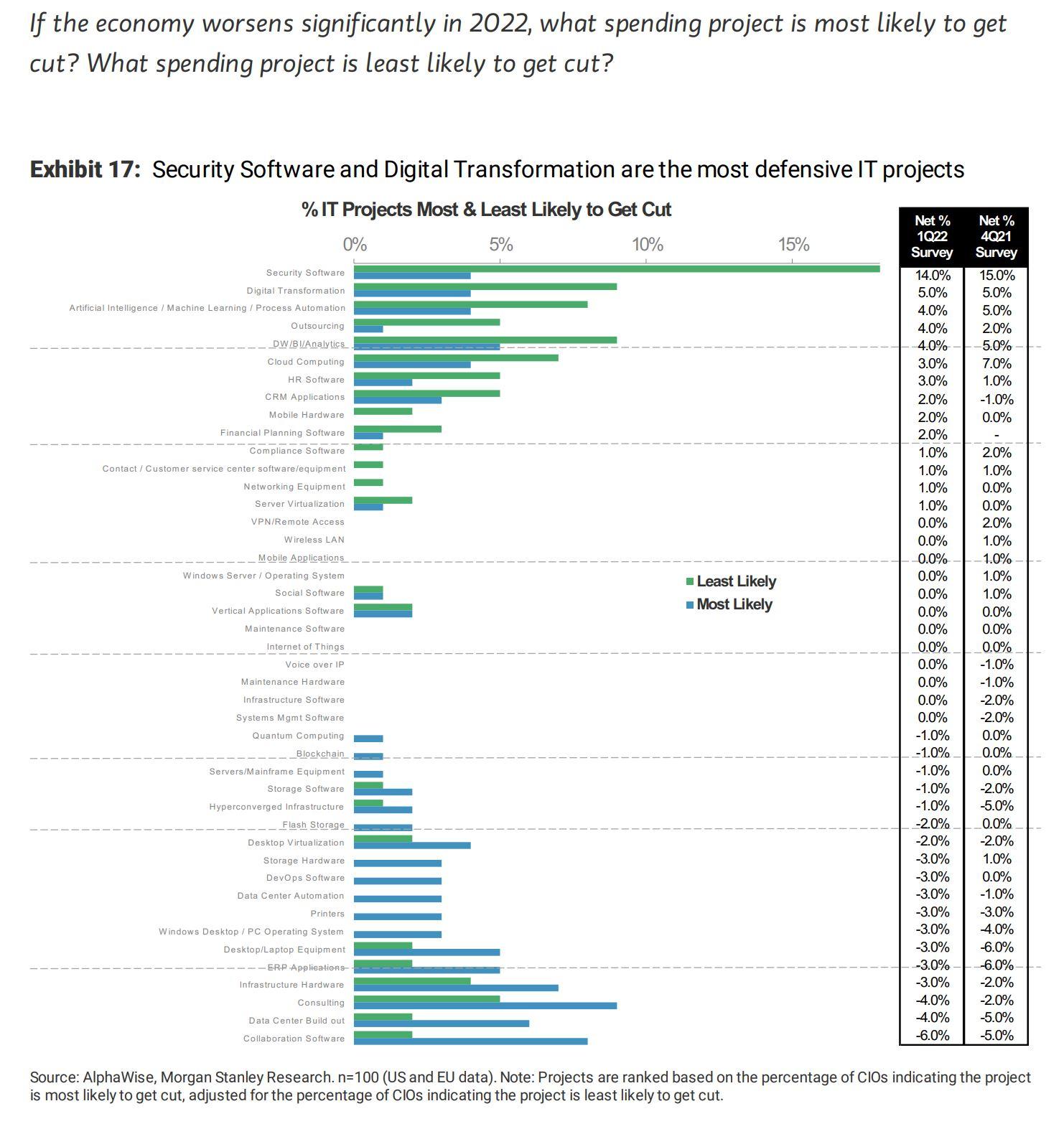 CIO responses on which projects they would cut spending on during a downturn. Source: Morgan Stanley.

As Snap's (SNAP)  Q2 warning highlights, online ad players are also vulnerable to budget cuts right now. This particularly holds for companies highly exposed to e-commerce ad spend (impacted by reopening activity and the shift to services spend) and/or brand ad spend (often one of the first things to get cut when companies get jittery about their demand environment).

Some of these trends will probably come into focus more as earnings season begins to unfold next month. Many, many, tech stocks look oversold right now, and with investor sentiment at exceptionally low levels right now, the sector could soon see a bounce. But some tech companies arguably have a better shot than others at maintaining any momentum that forms over the next couple of weeks into July and August.

(ABNB, AMZN and MSFT are holdings in the Action Alerts PLUS member club. Want to be alerted before AAP buys or sells these stocks? Learn more now. )