Salesforce.com (CRM) not only announced its quarterly results and guidance after the bell, a CFO change, its outlook for its next fiscal year and its much-rumored deal to acquire Slack (WORK) .

Here's a run-down of important things announced by Salesforce and Slack on a very eventful Tuesday afternoon for the companies.

With pre-earnings expectations high and the company's quarterly EPS guidance possibly weighing on shares, Salesforce's stock finished after-hours trading down 4.7% to $230.00. Salesforce went into its report up 48% on the year and sporting a $220 billion market cap.

As was widely expected, Salesforce announced that it's buying chat/collaboration software provider Slack. The company is paying $26.79 per share in cash (total payout of more than $15 billion) and issuing 0.0776 Salesforce shares for each Slack share.

Based on Salesforce's current after-hours trading price, the deal terms spell a purchase price of slightly less than $25.5 billion. That in turn is equal to 20 times Slack's fiscal 2022 (ends in Jan. '22) billings consensus.

Salesforce expects the deal to close in its July 2021 quarter. It plans to finance the cash portion of the deal through a mixture of cash on hand (it had $9.5 billion at the end of October) and debt. In the interim, the company is obtaining a $10 billion bridge loan facility from three banks. Slack CEO Stewart Butterfield will remain in charge of Slack following the deal's closing. 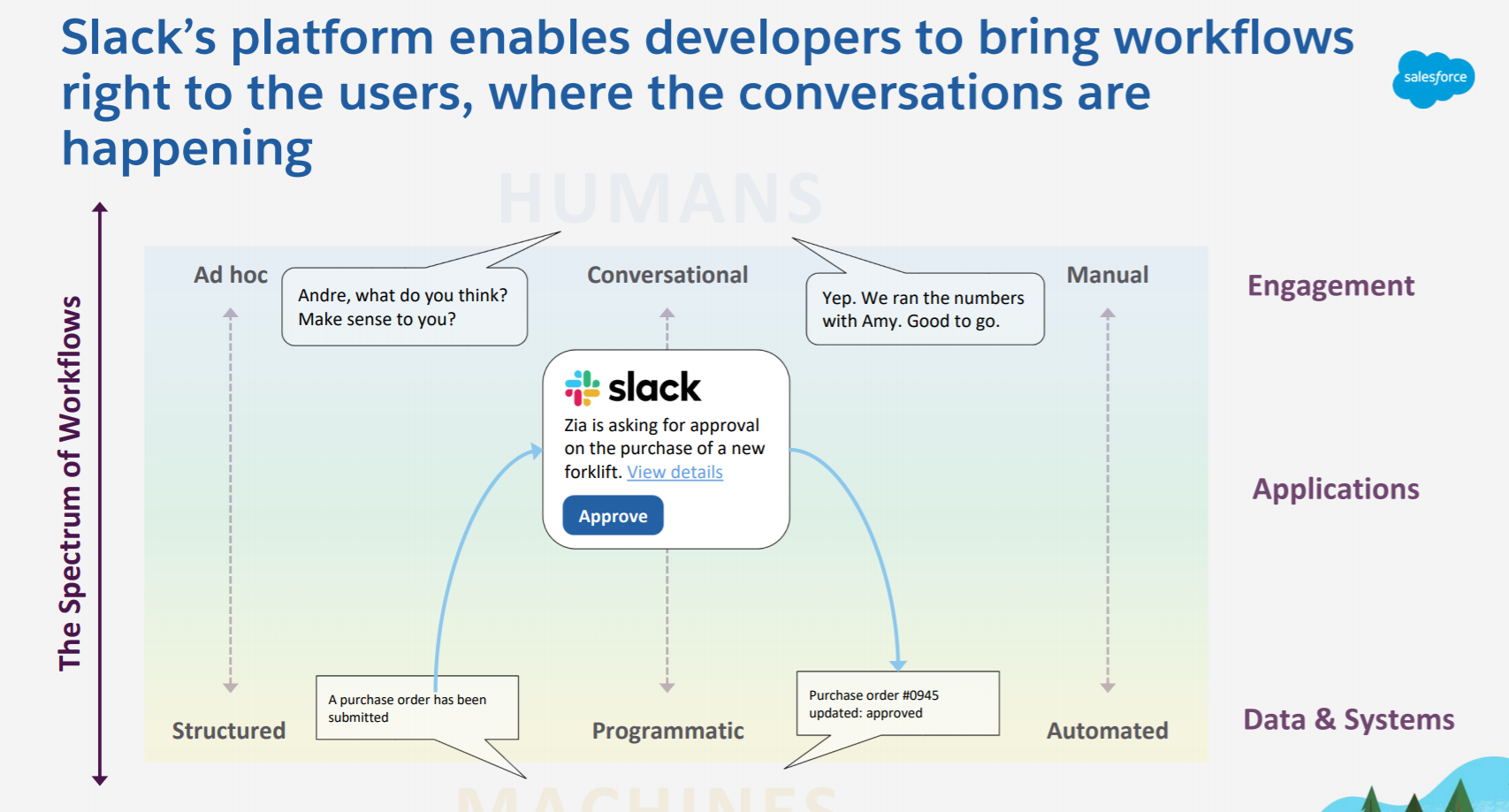 Salesforce says that Slack's software will act as the user interface for Salesforce's Customer 360 platform, which attempts to give sales, marketing and customer support workers a unified view of the customer data provided by Salesforce's apps and app ecosystem. The company insists that pairing Slack with Customer 360 will "transform how people communicate, collaborate and take action on customer information across Salesforce as well as information from all of their other business apps and systems."

Naturally, Salesforce also plans to use its extensive go-to-market resources to help grow Slack's enterprise footprint. And it sees opportunities to integrate each company's extensive app and workflow ecosystem.

"I think these collaborative interfaces and video-based interfaces are the next major moment in our industry," CEO Marc Benioff said on Salesforce's earnings call. "But underneath those services...you have so many rich services, applications, integrations, artificial intelligence, and fundamentally, big data lakes...With this combination of Slack and Salesforce...my whole world is on this platform." 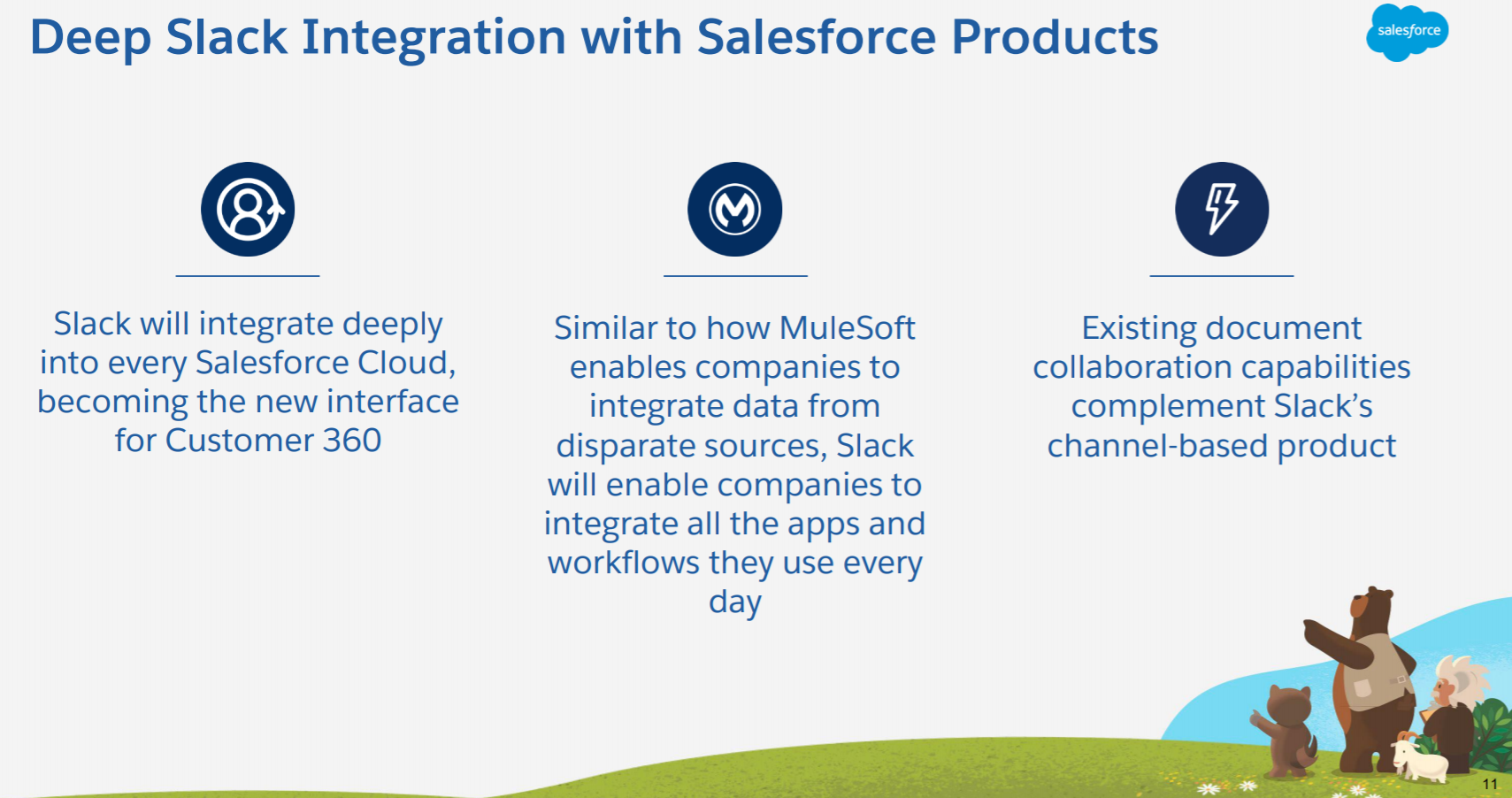 Salesforce's plans for integrating Slack with its offerings. Source: Salesforce.

"I think we really view Slack as really the system of engagement for every employee, for every partner and for every customer interaction," said COO Bret Taylor. "It really is about facilitating this all-digital work from anywhere in the world to enable team selling; to enable people in the contact center to swarm on a case digitally whether or not you're in the same building; to enable marketers to plan a campaign; to enable merchandisers to plan what goes in the front page of a commerce app or a commerce website."

In its earnings report, Salesforce disclosed that Mark Hawkins, its CFO since 2014, will be retiring at the end of January. He'll be replaced by chief legal officer Amy Weaver.

Hawkins will remain with Salesforce in an advisory role. Officially, he'll have the title of CFO Emeritus.

Slack posted its October quarter results in tandem with the deal announcement. Revenue of $234.5 million (up 39% annually) topped a $224.8 million consensus, and non-GAAP EPS of $0.01 topped a negative $0.04 consensus.

Salesforce's remaining performant obligation (RPO - all the future revenue it has under contract) rose 17% annually to $30.3 billion.

Its current RPO (revenue under contract that's expected to be recognized within 12 months) rose 20% to $15.3 billion, slightly beating guidance for 19% growth. Current RPO growth is expected to slow to about 16% in the January quarter. 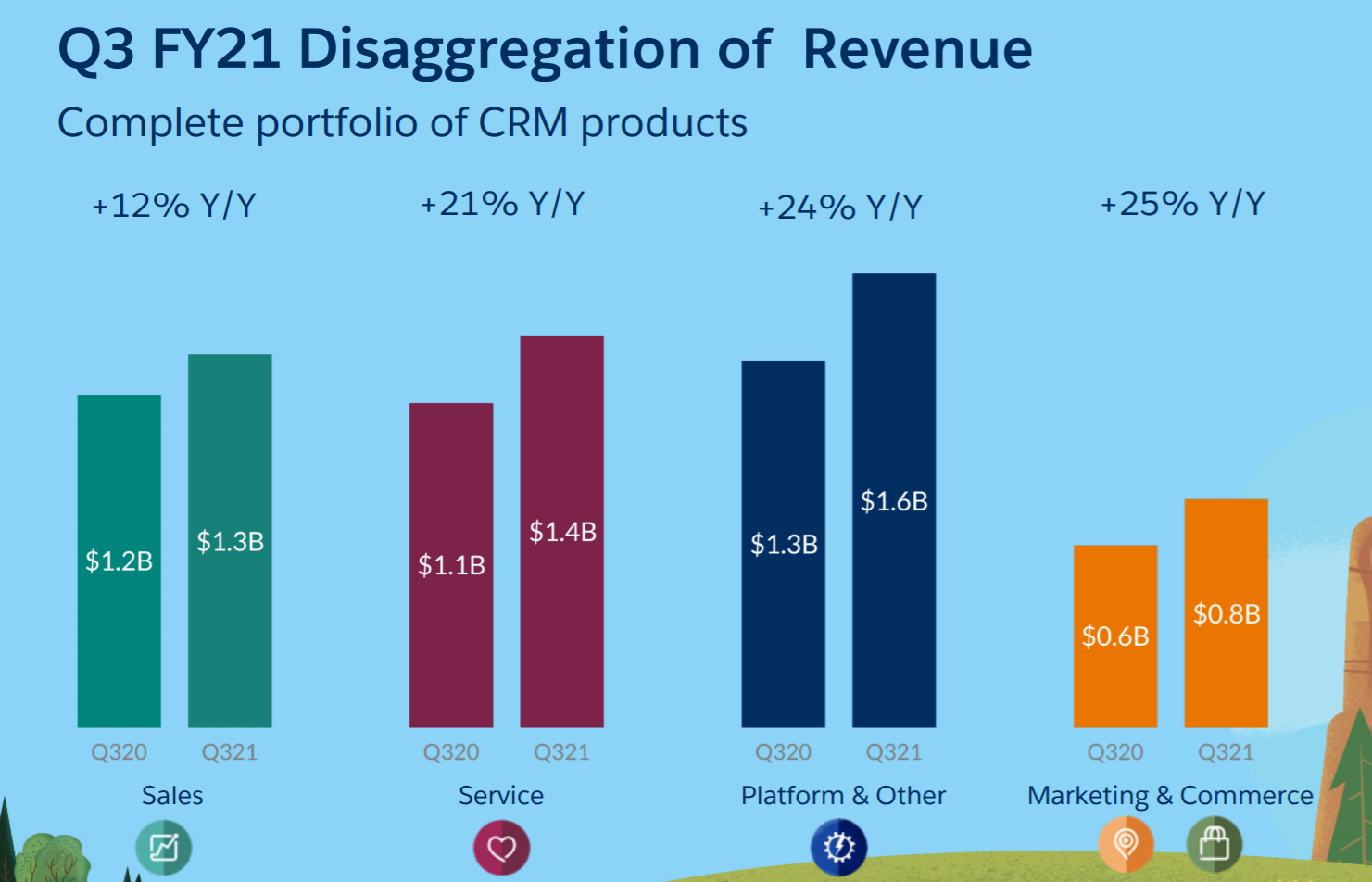 Salesforce's management was generally positive on the call about the near-term demand environment.

"What we saw in [fiscal] Q3 was a continuation of the strong demand that we saw in Q2, and it's a very well-rounded performance across all the clouds and both in the U.S. and internationally," said chief revenue officer Gavin Patterson. "And as we look into Q4 and beyond, the pipeline continues to be very encouraging."

Ever the salesman, Benioff declared Salesforce's October quarter performance to be "remarkable" and "unbelievable," and also suggested he was pleased with the company's January quarter deal pipeline. "We're strong in every one of our key categories, from sales to service to marketing to commerce to platform to analytics [and] integration," he insisted.

Hawkins noted Salesforce's customer revenue attrition remained in the 9% to 10% range, while indicating this is both slightly above Salesforce's pre-COVID expectations and slightly better than what it was forecasting at the time of its April quarter call.