Here are some initial thoughts on the deal, which is expected to close on or about October 1, 2019, according to the companies, and carries a price more than twice that of Salesforce's $6.5 billion 2018 purchase of API management software firm MuleSoft.

1. The Deal Is Expensive, and Will Be Dilutive in the Near-Term

Based on Salesforce's current trading price of $154.29 -- its shares are down over 4% on news of the Tableau deal -- the company is paying $170.18 per share for Tableau, or more than a 35% premium to Tableau's Friday close. The deal also carries an enterprise value (market cap minus net cash) equal to more than 30 times Tableau's 2021 free cash flow consensus of $473 million.

With Salesforce paying for the acquisition purely in stock, the deal stands to increase the company's diluted share count by more than 10%. Thanks partly to this dilution as well as expected, one-time, unearned revenue write-downs and integration costs, Salesforce is cutting its fiscal 2020 (ends in Jan. 2020) non-GAAP EPS guidance by $0.37 to a range of $2.51 to $2.53.

Not surprisingly, Salesforce argues there's value in pairing Tableau's popular analytics and data visualization software with Salesforce's various customer relationship management (CRM) offerings for sales, marketing and customer service pros. But while Tableau's software is often used to analyze and visualize CRM data, it's also used with many, many other types of data.

Likewise, while Salesforce has talked up the ability of MuleSoft's API management software to unlock data from back-end systems so that it can be accessed by its CRM apps and its Einstein Analytics platform (often used to analyze data produced by Salesforce apps), MuleSoft is still leveraged for many non-CRM projects.

The big picture: Salesforce clearly sees a major long-term opportunity in the realms of data integration and analytics, as the number of APIs created and accessed by corporate developers continues growing and BI/analytics software becomes adopted by more and more non-technical office workers.

Salesforce and Tableau at a glance. Source: Salesforce.

In recent years, Tableau's analytics platform and Microsoft's (MSFT) Power BI software have easily held the most prestigious rankings within research firm Gartner's Magic Quadrant reports for analytics and BI platforms. Likewise, in a February interview, Tableau CFO Damon Fletcher indicated to me that Power BI, which is bundled to an extent with some enterprise Office 365 subscription plans, is the rival Tableau is seeing most frequently these days when battling for deals.

Meanwhile, though its sales in this field skew towards mid-market firms rather than large enterprises, Microsoft is becoming a larger rival to Salesforce in the CRM software market, thanks to growing uptake for its Dynamics 365 family of cloud business apps. And it probably wasn't lost on Salesforce that Microsoft has taken steps to integrate its Dynamics CRM apps with Power BI.

4. Salesforce's Go-to-Market and Technical Strengths Could Give Tableau a Boost

Salesforce has established quite the track record of using its giant internal salesforce, as well as its large base of resellers and IT services partners, to grow the sales of acquired products. And given that Tableau has long tried to sell enterprises on how user-friendly its platform is for regular office workers, Salesforce might be able to use its Trailhead learning platform to grow the number of office workers who are trained to use Tableau's software.

In addition, while Salesforce's Einstein platform is a smaller player in the BI/analytics space than Tableau, it has received high marks for its augmented analytics capabilities, which use AI/machine learning to automatically generate insights from data. Some of the comments made by co-CEOs Marc Benioff and Keith Block on a conference call about the Tableau deal suggest Salesforce sees an opportunity to bring Einstein's machine learning capabilities to Tableau. 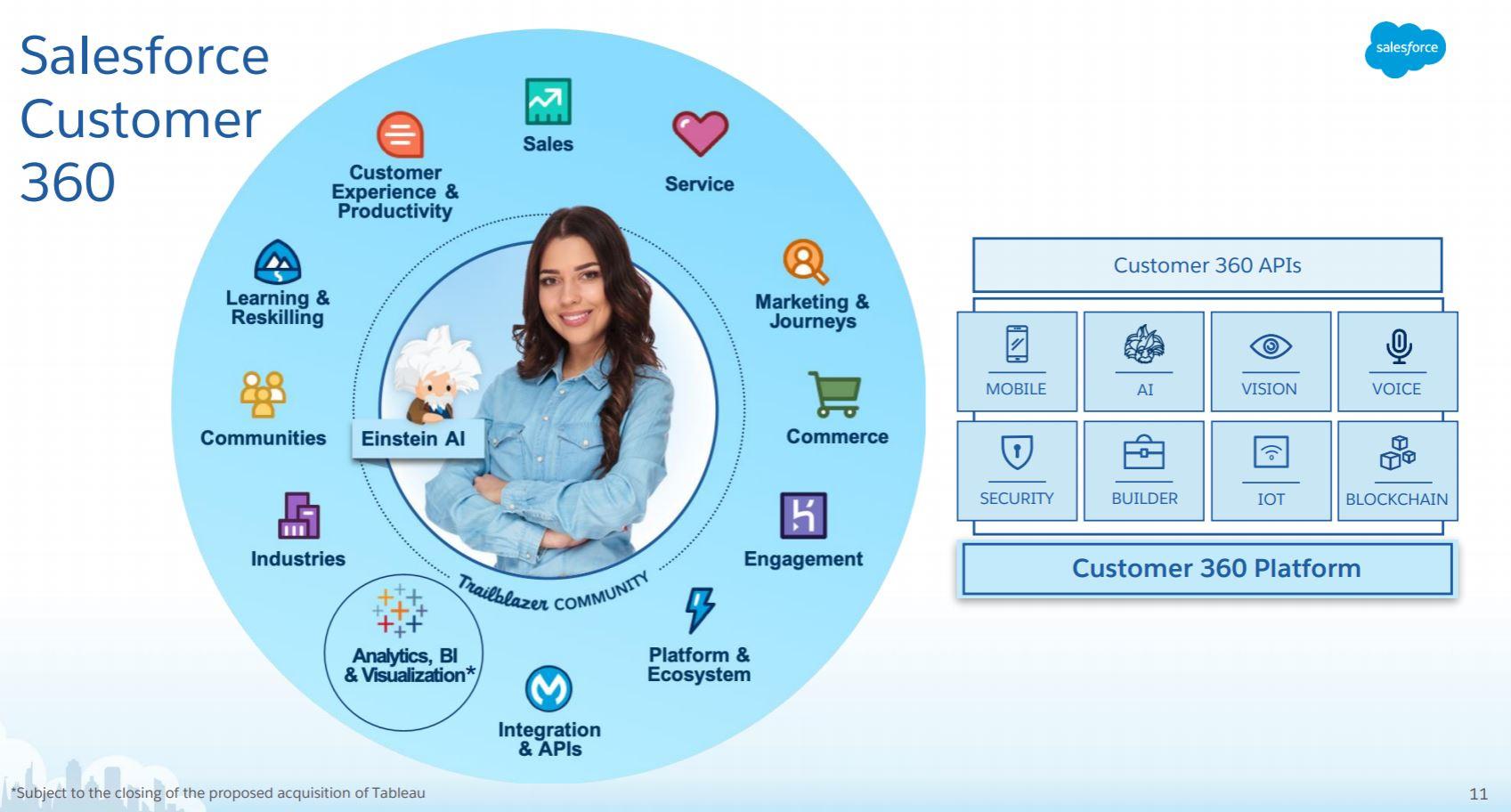 5. More Analytics M&A Deals Could Be on the Way

The Salesforce/Tableau deal comes less than a week after Alphabet/Google (GOOGL) announced it's buying Looker, a smaller BI/analytics player, for $2.6 billion. With the BI software market still pretty fragmented and expected to see healthy long-term growth, it wouldn't be shocking to see the market further consolidate this year.

Markets are certainly betting more analytics-related M&A is on the way: Domo Technologies (DOMO) , another smaller rival of Tableau's, is up over 12% in Monday trading. Some companies operating in analytics fields adjacent to Tableau's core business are also rallying. Alteryx (AYX) , a top provider of data discovery and preparation software, is up over 4%, and Splunk (SPLK) , the top provider of software used to analyze machine/log data, is up over 6%.

Get an email alert each time I write an article for Real Money. Click the "+Follow" next to my byline to this article.
TAGS: Software & Services | Technology | Investing