Much like several other mobile chip suppliers this earnings season, Qualcomm's (QCOM) results and guidance are getting a thumbs-up from Wall Street.

Boosting EPS guidance some: Qualcomm expects its patent-licensing unit (QTL), which naturally has very high margins, to post revenue of $1.3 billion to $1.5 billion. That's up 28% to 47% annually with the help of this year's settlement with Apple (AAPL) , and above a $1.26 billion consensus. On the other hand, with soft Chinese and high-end chip sales weighing, MSM (processor and modem) chip shipments are expected to be down 11% to 22%, to a range of 145 million to 165 million.

Here are some notable takeaways from Qualcomm's earnings report and call.

1. Qualcomm Expects Chip Sales to Pick Up in Early 2020

On the call, Palkhiwala said Qualcomm expects QTL's revenue to drop to a range of $1 billion to $1.2 billion in its March quarter (this compares with a $1.15 billion consensus) due to seasonality. However, he added the company's chip division (QCT) is expected to see revenue to grow by a mid-teens percentage sequentially, and its pre-tax profit margin to improve to a mid-teens percentage from an expected September quarter margin of 10% to 12%.

Ramps for sub-$1,000 5G phones are expected to provide an early-2020 boost, as are shipments of Qualcomm's next flagship mobile processor (expected to be called the Snapdragon 865). Samsung's Galaxy S11 phone launches should help on both counts, as should Chinese 5G phone launches.

2. The Company Struck an Upbeat Tone About 2020 5G Demand

For the third quarter in a row, Qualcomm cut its outlook for 2019 3G/4G/5G device shipments: It now expects about 1.7 billion of them, after guiding in July for 1.7 billion to 1.8 billion.

For 2020, the company is setting an initial forecast of 1.75 billion to 1.85 billion shipments, up a modest 3% at the midpoints. However, that guidance assumes 175 million to 225 million expected 5G device shipments. 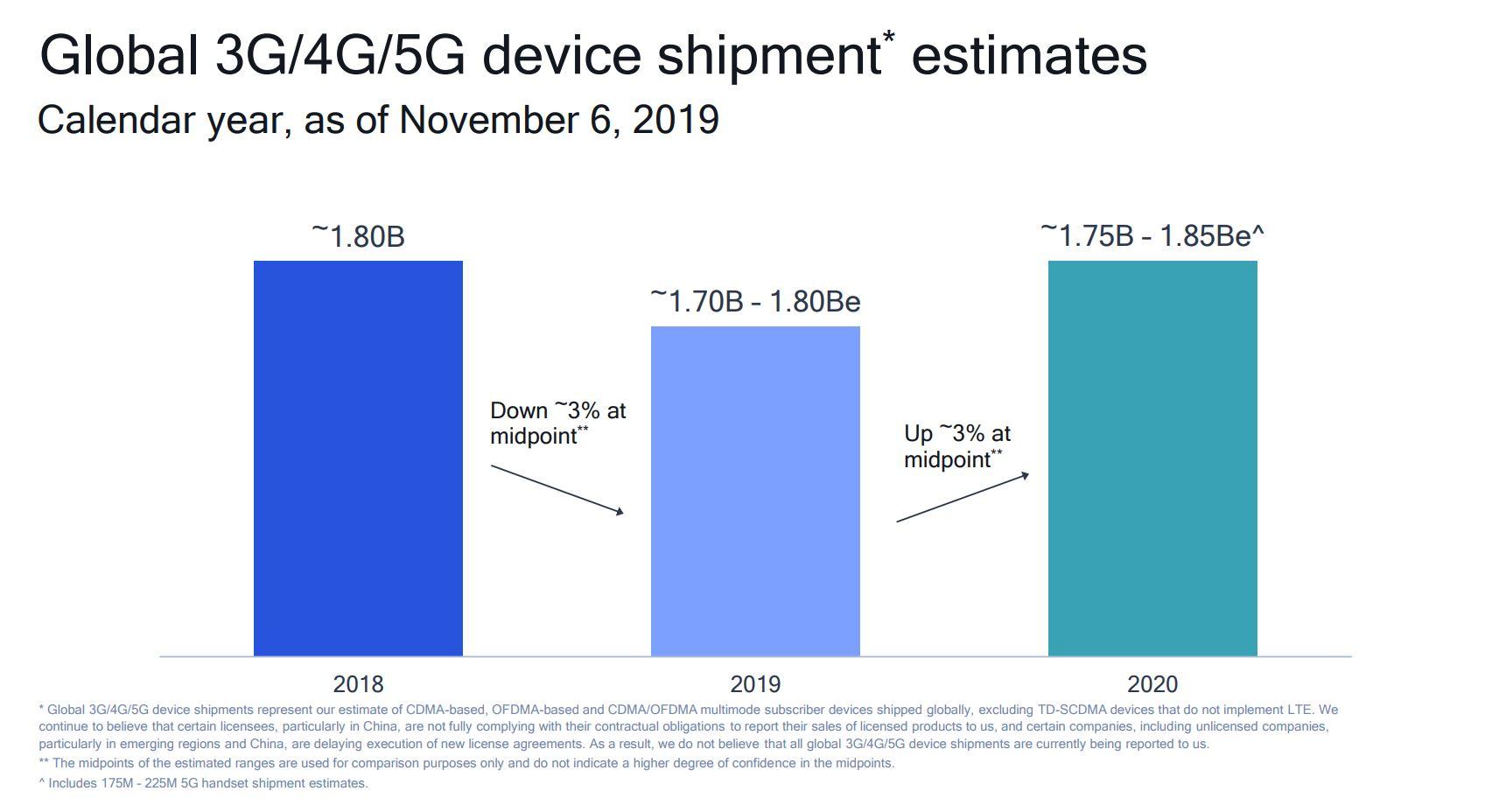 Qualcomm benefits from a higher mix of 5G shipments both due to the relatively high average selling prices (ASPs) expected to be carried by 5G phones (this yields higher royalties), and also -- notably -- due to higher chip content, with the company estimating 5G phones will on average produce 50% more chip revenue due to their use of costlier modems and more RF front-end chips.

President Cristiano Amon disclosed that Qualcomm now has 230-plus 5G device design wins, up from 150-plus three months ago. He added that "virtually all" of the designs are using Qualcomm RF front-end offerings, which cover both traditional, sub-6GHz spectrum bands and high-frequency, millimeter-wave (mmWave) bands that can provide large amounts of capacity over short distances.

While Skyworks (SWKS) , Qorvo (QRVO) and Broadcom (AVGO) are also notable players in the sub-6GHz 5G RF space, Qualcomm appears to have a meaningful early lead in mmWave. Palkhiwala noted that the U.S., South Korea and Japan are at the forefront for now in terms of deploying mmWave, and that Europe is expected to start deploying it in late 2020 to early 2021. Chinese 5G deployments, on the other hand, are limited to sub-6GHz spectrum for the time being.

3. Huawei Is a Near-Term Headwind in Multiple Respects

Though Qualcomm has settled its legal dispute with Apple, its battle with Huawei remains ongoing. And whereas Qualcomm collected $100 million in Huawei revenue in its September 2018 quarter through an "interim agreement," that agreement expired in Qualcomm's June 2019 quarter. As a result, Qualcomm isn't modeling any Huawei licensing revenue for now.

Meanwhile, Huawei has been taking significant share in the Chinese smartphone market. That affects Qualcomm's top line both due to the lack of royalties on Huawei phone sales, and because Huawei relies heavily on processors and modems developed by its HiSilicon chip unit.

Qualcomm expects its R&D/SG&A spending to be flat to down 2% sequentially in the December quarter.

Qualcomm says it spent $706 million to repurchase 9.4 million shares last quarter, leading its total buybacks for fiscal 2019 (it ended in September) to amount to $1.79 billion.

Since the end of the September quarter, Qualcomm has spent $300 million to repurchase another 3.9 million shares. That suggests about $6.8 billion is left on the $30 billion buyback authorization announced in the summer of 2018.

Apple is a holding in Jim Cramer's Action Alerts PLUS member club.