Revenue of $442.6 million blew past a FactSet consensus of $383 million, with annual growth soaring to 58% from Q2's 4%. And in spite of a much tougher annual comp, Pinterest guided for revenue growth to accelerate slightly to 60% in Q4 (the consensus was at just 35%). 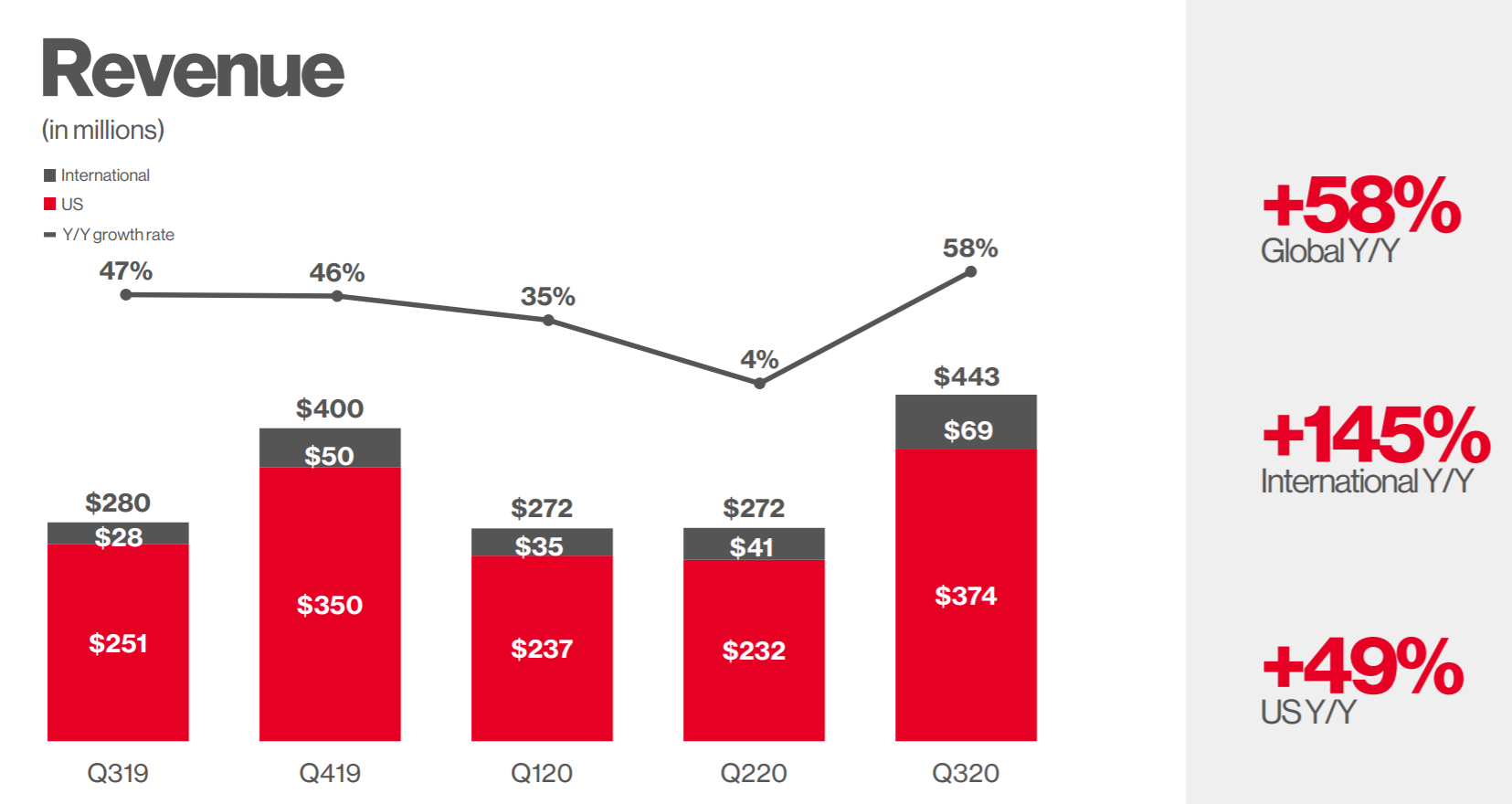 These numbers arrive eight days after Snap delivered a big Q3 beat of its own, with revenue of $679 million (up 52% annually) topping consensus by $122 million and DAUs of 249 million (up 19%) beating by 5 million (unlike Pinterest, Snap didn't issue Q4 guidance, citing COVID-related uncertainty).

And Pinterest's report arrives a day after Microsoft reported stronger-than-expected LinkedIn revenue growth thanks to a 40% increase in LinkedIn's Marketing Solutions (ad) revenue. Microsoft did also report a 10% drop in search ad revenue (weak ad spend in verticals such as travel and hospitality remains a headwind), but that was a little better than Q2's 18% drop.

It's worth noting here that in addition to an improving spending environment, both Pinterest and Snap are benefiting from some company-specific factors.

Both companies indicated that their ad sales have gotten a boost from Facebook  (FB) advertiser boycotts, and each one has also been aggressively rolling out new ad products and tools over the last 12-to-18 months. Pinterest has been investing in developing new ad solutions for online retailers and other direct response advertisers, while Snap has been investing in new sponsored lens options and video and e-commerce ad formats. 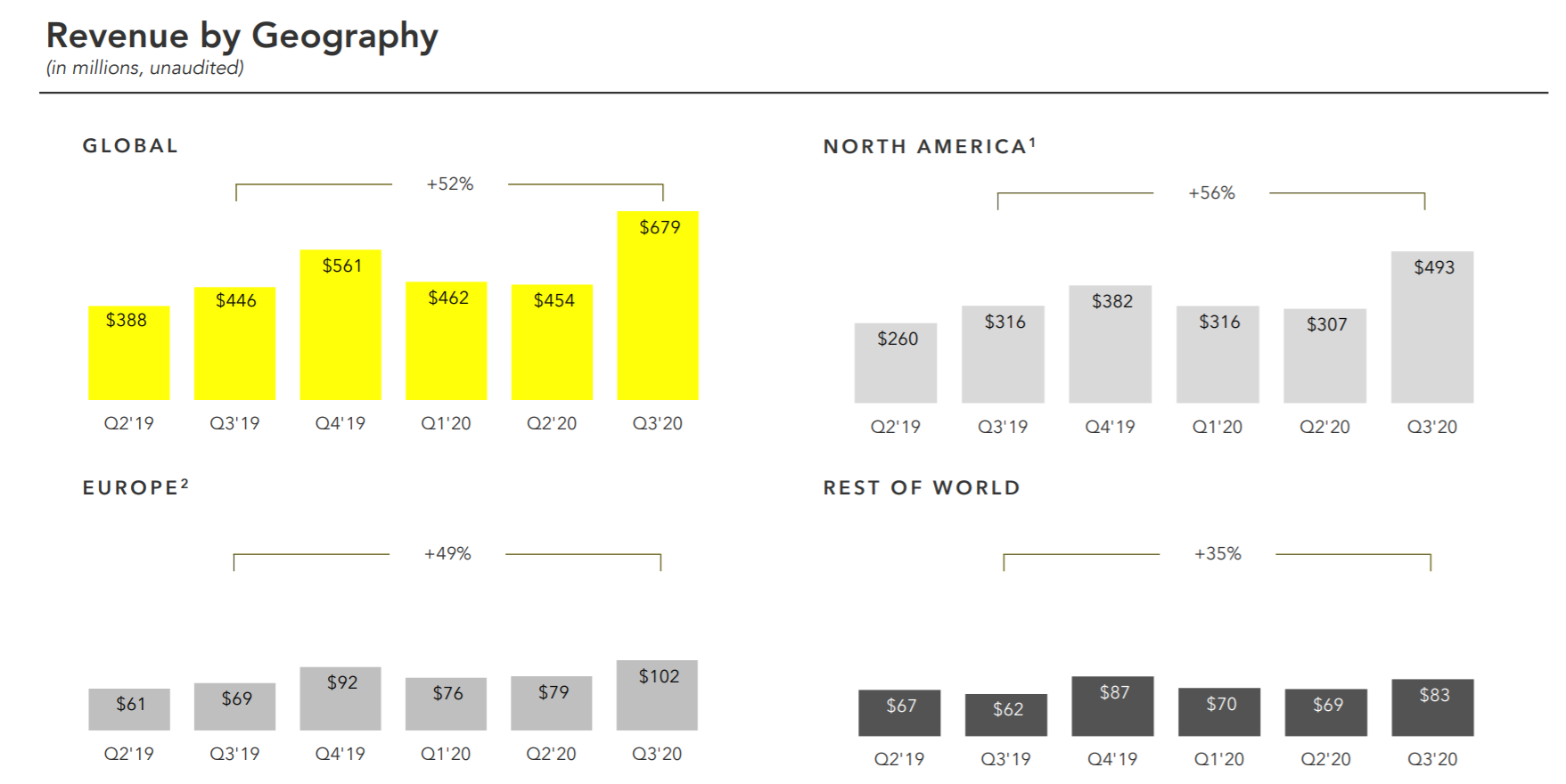 Also: Though it's worth keeping in mind that its business skews more towards direct response ads rather than brand ads, ad agency Merkle shared data that suggests its clients' Q3 ad spend on platforms such as Facebook, Instagram, Google Search and Amazon.com (AMZN)  generally picked up.

Merkle's client Instagram ad spend growth rose to 34% from Q2's 30%, while spending growth for Facebook proper improved to 12% from 4%. And though Prime Day was pushed out from Q3 to Q4 this year, spending growth improved to 50% from 22% for Amazon's Sponsored Product ads, and to 74% from 58% for its Sponsored Brand ads.

All of this makes for an interesting setup as Twitter (TWTR) , Facebook, Alphabet/Google (GOOGL) and Amazon share their own Q3 ad sales figures on Thursday afternoon.

It's not guaranteed that all of the online ad sales numbers shared on Thursday will be strong -- I think Twitter in particular has some company-specific headwinds, such as lower sports ratings and ongoing ad-targeting issues, that could help offset favorable trends such as rebounding brand ad spend and the election's near-term impact on engagement.

But what has been shared to date regarding Q3 online ad spend does bode well for what companies will be reporting on Thursday overall.

This article has been corrected to state that Twitter reports on Thursday afternoon, rather than Thursday morning.