Though PayPal (PYPL)  seems to have several reasons for buying e-commerce deals and discount service Honey, the biggest might be its desire to better differentiate its payments platforms in a busier and more competitive environment.

PayPal is spending about $4 billion in cash to buy Honey, whose services (provided via browser plug-ins, along with a standalone website and apps) help online shoppers obtain discounts on purchases, discover deals and collect rewards points for purchases that can be converted into gift cards. The deal is expected to close in Q1 2020.

Honey's services claim 17 million monthly active users (I'm one of them) and work to some degree or another with 30,000 merchants, including big ones such as Amazon.com (AMZN) , Walmart  (WMT) and Expedia (EXPE) . The company had 2018 revenue of more than $100 million -- it typically gets a cut on purchases for which Honey's services are used -- and was also profitable last year. PayPal sees the acquisition being accretive to EPS in 2021.

PayPal, which currently has about 300 million active accounts, is making it pretty clear that it wants to significantly grow Honey's user base by integrating its services with PayPal and Venmo's payments platforms. Possibilities that come to mind include integrating and promoting Honey's deals services within PayPal and Venmo's websites and apps, letting users check for discounts after logging into PayPal or Venmo on a merchant site or app -- potentially quite useful on mobile devices, where Honey's browser plugin isn't available -- and promoting PayPal and Venmo as checkout options to shoppers who have discovered deals via Honey.

PayPal also says it wants to promote Honey's platform to its giant merchant base, arguing that merchants could use it to boost sales volumes and conversion rates with the help of personalized offers, as well as obtain brand-new customers. However, CEO Dan Schulman suggested on a Wednesday conference call that the synergies provided by combining PayPal and Honey would "predominantly" be on the consumer side of things. 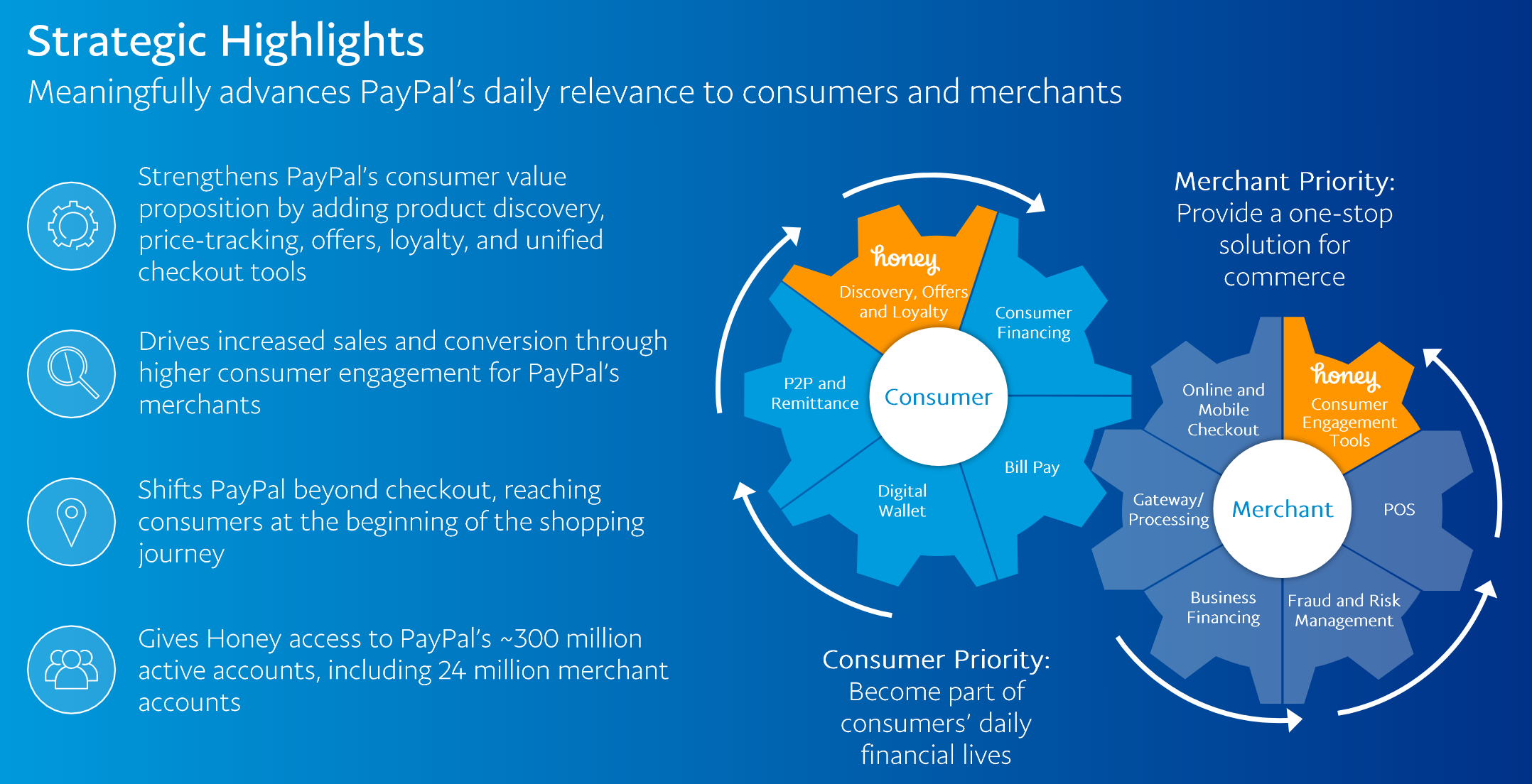 I've had Honey's browser plugin installed on Google Chrome for several years, and would say that it's on the whole useful when making purchases online, but a little hit-and-miss. There are occasions when Honey will help you get a discount with a merchant partner via its price-checking or promo code tools, and/or provide gift card points through its Honey Gold service. And there are occasions when it doesn't.

But from PayPal's perspective, if some meaningful percentage of its users adopt Honey and prove more willing to make purchases via PayPal or Venmo because of it, the deal is a worthwhile one -- particularly since it arrives at a time when competition is intensifying.

Apple (AAPL) has been seeing tremendous growth for Apple Pay -- Apple Pay transactions more than doubled annually during the company's September quarter to more than three billion. And while a lot of this growth is tied to physical retail transactions, Apple is also seeing growing uptake for Apple Pay's mobile web and in-app payment services, which (thanks to their ability to leverage Face ID and Touch ID authentication) provide a fairly convenient checkout experience.

PayPal also faces some competition from Amazon.com's (AMZN) Amazon Pay service, as well as -- though PayPal is offered as one of several payment methods for them -- from Alphabet's (GOOGL) Google Pay service and Facebook's (FB) just-announced Facebook Pay service. In addition, Visa, Mastercard, Discover and American Express recently unveiled a 1-click checkout button that merchants can add to their websites.

PayPal isn't by any means doing terribly in this environment: It's coming off a Q3 in which its revenue, active accounts and total payments volume were up 19%, 16% and 25%, respectively. The company still has a slew of long-term growth drivers, including continued double-digit e-commerce and digital content services growth as well as the long-term revenue potential of fast-growing Venmo, which PayPal is just beginning to tap into.

And with or without Honey, PayPal can still lean on some important competitive strengths. These include the popularity of its digital wallet services, the convenience of its One Touch checkout service, the adoption of Venmo's social features among younger consumers and the fact that many long-time PayPal users simply trust its services to work securely and reliably, and thus aren't inclined to switch to an alternative.

Nonetheless, considering how many shots are currently being fired at PayPal from deep-pocketed tech and payments giants, it's not hard to understand why the company is willing to cut a big check to bolster its competitive standing with consumers.

Get an email alert each time I write an article for Real Money. Click the "+Follow" next to my byline to this article.
TAGS: Investing | Financial Services | Technology |

Possibly, as a number of Big Blue's technical signals are bullish.

Don't Get Caught in NetApp

Let's check the charts and indicators before earnings for NTAP land later on Tuesday.

CrowdStrike Ahead of Earnings: Strike Now or Avoid the Crowd?

Let's check the charts on this prominent cybersecurity company.