Netflix (NFLX) is up 67% on the year and sporting a $238 billion market cap heading into Tuesday afternoon's Q3 report, as markets bet the streaming giant will continue registering strong subscriber growth in the coming quarters and years.

Currently, the consensus among analysts polled by FactSet is for Q3 revenue of $6.39 billion (up 20% annually) and GAAP EPS of $2.13 (up 45%). However, Netflix's paid subscriber numbers -- both what it reports and guides for -- typically have a much bigger impact on how it moves post-earnings.

I'll be live-blogging Netflix's report, which is due after the bell on Tuesday, along with a "video interview" that's set to be shared at 6 P.M. Eastern Time. Here are a few things to keep an eye on:

Netflix added nearly 26 million paid subs during the first half of 2020, as COVID-19 lockdowns drove massive sign-ups from early March to late May. However, Netflix also disclosed in July that subscriber growth subsequently cooled -- hence its subdued Q3 guidance -- and asserted that its strong first-half growth likely served to pull forward some sign-ups that would've otherwise happened during the second half of 2020. 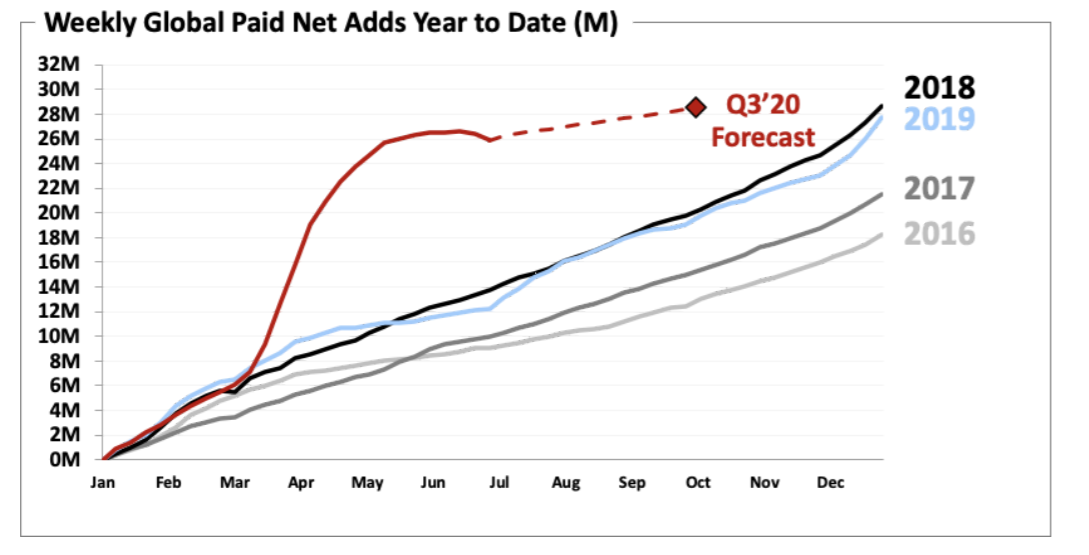 With COVID-19 still very much influencing consumer behavior in the U.S. and elsewhere, and with cooler weather now arriving in many Netflix markets, it's worth paying close attention to any commentary shared about how much COVID-19 is now affecting demand -- whether in terms of sign-ups or content viewing -- as Q4 kicks off.

Netflix's Q2 subscriber growth was pretty well spread out across its four geographic segments: The company respectively added 2.94 million paid subs in the U.S. and Canada, 2.75 million in EMEA, 1.75 million in Latin America and 2.66 million in the Asia-Pac region.

Analysts expect things to trend a little differently in Q3. The consensus is for Netflix to lose 246,000 paid subs in the U.S. and Canada, while respectively gaining 1.41 million in EMEA, 829,000 in Latin America and 1.1 million in Asia-Pac.

Netflix's streaming average revenue per user (ARPU) rose a modest 0.4% annually in dollars in Q2, but was up 5% in constant currency (CC). Forex swings were especially a headwind for Latin American ARPU, which fell 9% in dollars but was up 13% in CC.

With the dollar having softened against many currencies recently, forex should be less of a headwind for Netflix's Q3 ARPU, and perhaps even a tailwind in some regions.

Netflix has been using its shareholder letters to share viewing data about newly-released original films and TV show seasons. In its Q2 letter, for example, the company mentioned that 99 million and 65 million households respectively watched action film Extraction and Season 4 of La Casa de Papel during their first 28 days of availability. Stats about originals released in Q3 should be shared in the Q3 letter.

With many movie theaters still closed -- and many consumers reluctant to go inside the ones that are open -- it's no secret that Hollywood studios have often been willing to license films that in more normal times would be seeing box-office debuts. Keep an eye out for any comments management shares about what kinds of deals have opened up as a result of this trend.

6. Comments About Production Halts -- and Their Impact on Free Cash Flow

Following nearly across-the-board content production halts in March, Netflix has resumed production work in many parts of the globe, albeit while cautioning that conditions remain difficult in certain regions. The company said in July that its 2020 release schedule remains "largely intact," but cautioned that (due to 2020 halts) its 2021 schedule for major titles will be more back half-weighted than usual.

By decreasing Netflix's massive content spend, production halts have boosted the company's near-term free cash flow (FCF). The company guided in July for 2020 FCF to be "breakeven to positive," after guiding for FCF of negative $1 billion or better in April.