As earnings season gets going, the market's euphoric reaction to Netflix's (NFLX) good-but-not-spectacular Q4 report might just be a sign that the bar is being set relatively low for growing big-cap tech companies that have been left by the wayside lately, as retail investors and momentum traders continue bidding various EV, cloud software and stay-at-home plays higher.

Netflix's closely-watched paid subscriber net adds (8.51M vs. a 6.19M consensus) did top expectations, but its Q1 paid net add guidance (6M vs. an 8.49M consensus) fell short by a comparable amount. As others have noted, Netflix might be guiding conservatively -- CFO Spence Neumann reiterated on Netflix's "earnings interview" that COVID-related uncertainty still makes forecasting tough for his company. But there's also another factor at play here: Netflix's decision to end free trials in the U.S. and many foreign markets.

Historically, Netflix has seen a lot of free trial sign-ups during the holiday season that convert into paid subscriptions in January. As a result, Q1's paid net adds have often been stronger than Q4's. But with free trials gone, the seasonally elevated sign-ups seen during the holiday season this time around generally counted immediately as paid subscriptions, which in turn boosted Q4 paid net adds and depressed Q1 paid net add guidance. 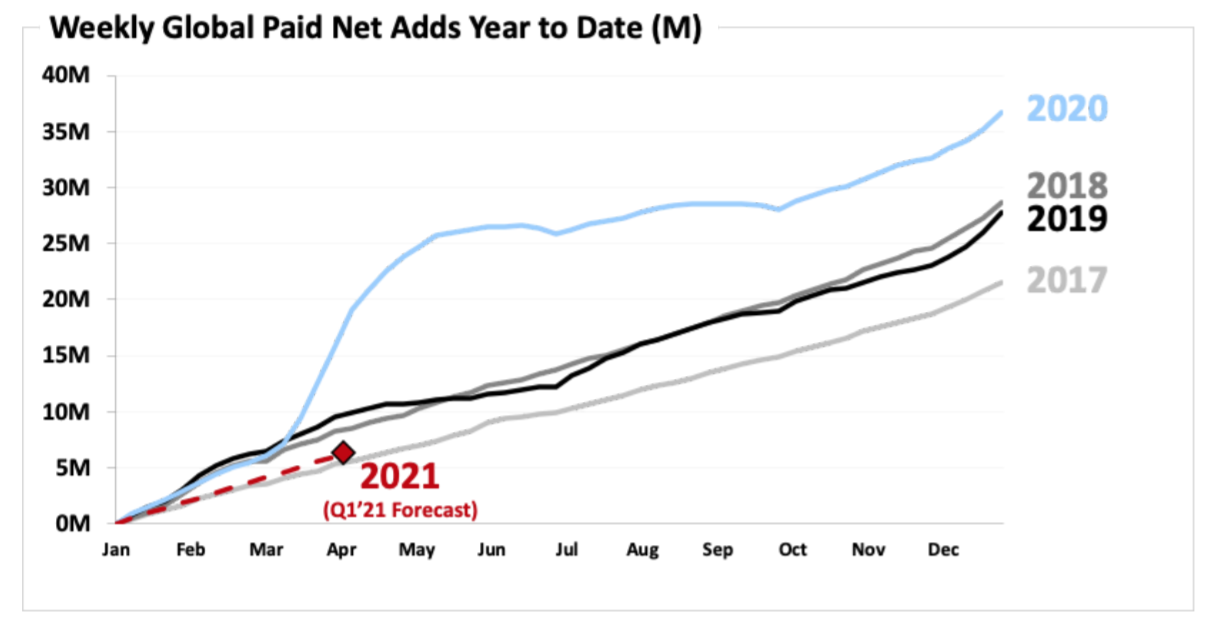 The other Netflix disclosure that markets seem quite pleased with is the company's guidance for free cash flow (FCF) to be "around break even" in 2021, and the related assertion that it believes it won't need to raise outside capital going forward. Again, this is good news, but hardly stunning: Netflix generated $1.9 billion in FCF in 2020 as COVID pushed some content spend out a year, and it was previously guiding for 2021 FCF of negative $1 billion to breakeven. While it wasn't a given that Netflix would declare itself financially self-sufficient this soon, it was a safe bet that they'd get there at least by 2022.

Finally, some investors were happy to see Netflix say that it will explore returning "excess cash" via stock buybacks going forward. Given Netflix's historical aversion to large M&A transactions in favor of pursuing an organic growth strategy, I like this policy as a matter of principle. But given how aggressively Netflix is still spending on content, I wouldn't count on a lot of "excess cash" being generated for at least a couple of years.

So why is Netflix blasting off post-earnings, with shares up almost 18% at last check? Its stock had gone nowhere since July, and while its latest numbers and commentary were arguably just good rather than amazing, they did dispel a lot of investor worries that had popped up -- whether about competitive pressure from Disney+ (DIS) and HBO Max, the impact of ending free trials on new sign-ups, the impact of recent price hikes on churn or how FCF might trend as Netflix keeps spending heavily on content to help keep rivals at bay.

You can argue Netflix's Q4 shareholder letter catapulted the company over a wall of worry. And that in turn might bode well for how companies such as Microsoft (MSFT) , Facebook (FB) and Amazon.com (AMZN) could move post-earnings if their numbers and commentary simply remind investors that business remains pretty good for them.

Microsoft reports on Jan. 26, Facebook on Jan. 27 and Amazon on Feb. 2. All three companies are rallying on Wednesday in the wake of Netflix's report (and amid a 1.9% Nasdaq gain), but still remain below highs set in late August and early September. And judging by how aggressively Netflix has been bid up post-earnings, as well as how some recent tech high-flyers are lagging today, we might just be in the early stages of a rotation within tech.

Disney, Microsoft, Facebook and Amazon are holdings in Jim Cramer's Action Alerts PLUS Charitable Trust Portfolio. Want to be alerted before Cramer buys or sells these stocks? Learn more now.

IBM Gets a Quant Downgrade, But Here's What the Charts Reveal

Shares of Big Blue continue to struggle to regain or restart their longer-term uptrend.