Tesla Keeps Struggling to Make Good on its Ambitious Targets

Though Tesla's (TSLA) surprise CFO announcement -- made at the very end of Wednesday's earnings call -- is getting more attention in the wake of its Q4 report, the company's latest batch of missed deadlines and moved goalposts shouldn't be ignored either.

In its Q4 shareholder letter, Tesla said it aims to reach a "sustained" weekly Model 3 production rate of 7,000 units at its Fremont, CA plant by the end of 2019. The company also said that -- with the help of a Shanghai Gigafactory that it promises will go live later this year -- it's "targeting annualized Model 3 output in excess of 500,000 units sometime between Q4 of 2019 and Q2 of 2020," barring "unexpected challenges" in Shanghai.

Also getting pushed back again: Tesla's ETA for the much-anticipated, $35,000, Standard Battery Model 3. On Tesla's Q3 call, Musk indicated consumers would start getting their hands on the $35,000 Model 3 in February or March. But on the Q4 call, he said his "rough guess" is that Tesla will launch the car, whose margin profile remains a big question mark, "sometime probably in the middle of this year."

Meanwhile, seven months after Musk suggested that Tesla's low-cost Model Y crossover would go into production in the first half of 2020, his company says it aims to "achieve volume production" for the Model Y by the end of 2020.

Then there's the Semi truck. When the truck was unveiled to much fanfare in late 2017, Musk said it would enter production in 2019. However, on the Q4 call, Tesla VP Jerome Guillen indicated Tesla wants to start production next year, while adding that the first Semi units "will be for our own usage."

Those bullish on Tesla could argue that while it often misses the production and delivery targets it sets, the company did make real progress in 2018, selling nearly 140,000 Model 3 units, growing its total automotive revenue 134% and (with the help of an improved Model 3 gross margin) becoming cash-flow positive during the back half of 2019. And with the company set to begin European and Chinese Model 3 deliveries it could keep growing Model 3 shipments this year even if the $35,000 version of the car doesn't ship in huge volumes.

And admittedly, die-hard Tesla bears (of which there are definitely many) often don't give the company enough credit for the extent to which its cars are beloved by a large percentage of their owners, nor the extent to which Tesla has been an auto industry innovator in everything from drivetrains and battery packs to infotainment systems, software updates and charging infrastructure.

However, valuation matters, and trust matters as well. And for the moment, Tesla sports a roughly $60 billion enterprise value (market cap plus net debt) while giving no reason to think that it's getting better at making good on its heady promises, and while also seeing a considerable amount of executive turnover.


Intel's New Permanent CEO Deserves the Benefit of the Doubt

Intel's (INTC) stock is down 1.3% amid a 1.3% gain for the Nasdaq, after the company announced that CFO and interim CEO Bob Swan has been named their permanent CEO.

Intel's decision, which comes seven months after former CEO Brian Krzanich resigned over a relationship with an employee, isn't being well-received by those who hoped the company would hire an outsider to shake things up (Apple (AAPL) chip engineering exec Johny Srouji was previously reported to be on Intel's candidate list). There might also be some concerns about the fact that Swan, who previously served as eBay's CFO for nine years and has also held several other CFO jobs, doesn't have a technical background.

However, given Intel's decision-making since Swan joined the company in Sep. 2016, as well as what he's saying and has been said about him, the decision should get the benefit of the doubt.

Though Intel's spending has become more disciplined since Swan joined -- on the Q4 earnings call, he noted Intel's revenue per employee is up by over 25% during the last three years -- it wouldn't be fair to view him as an overly cautious penny-pincher. Six months after Swan became CFO, Intel struck a $15.3 billion deal to buy ADAS/autonomous driving processor developer Mobileye. And this week -- though it's worth noting antitrust regulators might not be crazy about such a deal -- it was reported that Intel has offered up to $6 billion to buy rival server interconnect hardware and chip supplier Mellanox Technologies (MLNX) .

Meanwhile, 2018 saw Intel up its capital spending, which had arguably been kept too low for several years, by nearly 30% to $15.2 billion. And in 2019, as many other chip manufacturers pare their capex, Intel plans to spend $15.5 billion on capex.

And though the company's manufacturing process stumbles are clearly a problem as it battles the likes of AMD (AMD) , Qualcomm (QCOM) and Xilinx (XLNX) , Intel's R&D execution and decision-making has shown real signs of improvements over the last few years. This is reflected in everything from the pace at which Intel refreshes its PC and server CPU lineups, to its development of innovative solutions such as Foveros 3D packaging technology and Optane server memory modules, to its efforts to expand into markets such as server AI accelerators and 5G base station processors.

To be fair, much of the credit for the improved R&D execution and decision-making might belong to chief engineering officer Murthy Renduchintala (poached from Qualcomm in late 2015) and other execs. However, Swan -- in spite of the cost-cutting he has done in some areas -- clearly hasn't gotten in the way, either.

In an employee e-mail that he sent out today, Swan promised his company would "bold and fearless" going forward, and that it will keep pushing ahead with its efforts to lower its PC dependence. For now, it's worth taking him at his word.

Outside of a couple of areas of weakness related to its Windows and Office cash cows, Microsoft's (MSFT) latest results and guidance, which have led its stock to drop a little over 2%, were pretty solid.

To recap: Microsoft reported non-GAAP EPS of $1.10, beating consensus by a penny with the help of disciplined spending (operating expenses only rose 7%, less than revenue growth of 12%) and $6.4 billion worth of stock buybacks. However, revenue of $32.47 billion slightly missed a $32.54 billion consensus, breaking a run of beats going back to the March 2017 quarter.

Guidance wasn't bad -- particularly given that Microsoft tends to guide conservatively -- but was still pressured to an extent by the headwinds Microsoft saw in the December quarter. Microsoft forecast its three reporting segments would collectively see March quarter revenue of $29.4 billion to $30.1 billion, compared with a consensus of $29.86 billion.

On the earnings call, CFO Amy Hood noted Office consumer revenue was (as previously forecast by Microsoft) hurt by channel inventory changes, but added it was also pressured by a soft consumer PC market -- Intel (INTC) PC CPU shortages have been an issue -- and "execution challenges throughout the quarter."

Windows OEM revenue was also hurt by the Intel shortages. But with Hood also stating Microsoft's OEM non-Pro revenue fell more than the market amid "continued pressure in the entry-level category," Chromebook adoption also seems to be an issue.

Nonetheless, Microsoft's non-consumer operations, which produce the lion's share of its profits, generally had another strong quarter. 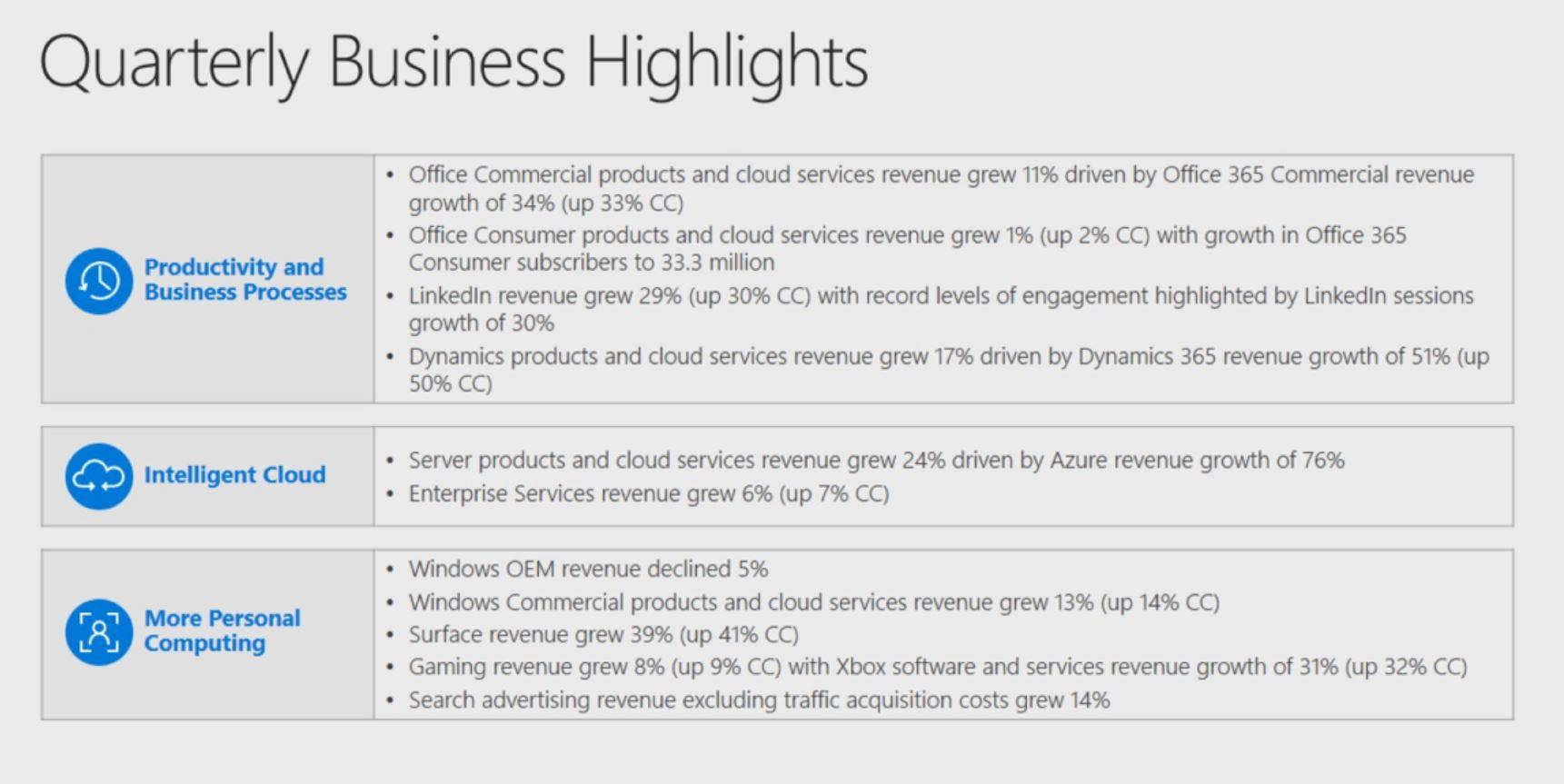 Most of Microsoft's businesses had a solid quarter.

Microsoft has some work to do with regards to improving consumer Office sales, and perhaps also related to fending off Chromebooks in the low-end PC market. But the company still looks pretty well-positioned to benefit public cloud service adoption, and to hold its own in an enterprise software market that's steadily claiming a larger and larger portion of total IT spending.