Microsoft (MSFT)  is heading into Tuesday's earnings report up 37% on the year, sporting a $1.64 trillion market cap and more generally riding a wave of positive sentiment regarding its exposure to favorable enterprise software, public cloud, gaming and work-from-home spending trends.

The consensus among analysts polled by FactSet is for the software giant to post September quarter (fiscal first quarter) revenue of $35.76 billion (up 8% annually) and both GAAP and non-GAAP EPS of $1.54.

For the December quarter -- Microsoft provides quarterly sales guidance on its earnings calls -- the consensus is for revenue of $40.5 billion (up 10%) and GAAP and non-GAAP EPS of $1.61.

Here are some things to watch as Satya Nadella's company reports after the bell on Tuesday and hosts an earnings call at 5:30 P.M. Eastern Time.

In the June quarter, Microsoft's commercial bookings rose 12% annually, and its commercial remaining performance obligation (RPO) -- all the future revenue it has under contract but hasn't yet recognized -- rose 23% to $107 billion. Strong Azure deal activity was a strong contributor in both cases.

CFO Amy Hood forecast Microsoft would see "healthy" commercial bookings growth in the September quarter, while cautioning that growth will be impacted by tough annual comps and low growth in the number of contracts coming up for renewal.

Microsoft's Azure revenue rose 47% annually in the June quarter. That was down from the March quarter's 59%, as the law of large numbers and relatively slow growth within Azure's SaaS offerings partly offset strong growth for Azure's cloud infrastructure (IaaS) and developer platform (PaaS) services, but still well above the 29% growth Amazon Web Services (AWS) reported for Q2.

Microsoft's Office commercial and consumer revenue growth rates respectively cooled to 5% and 6% in the June quarter, as continued Office 365 strength was offset by lower sales of traditional Office licenses to SMBs and consumers. 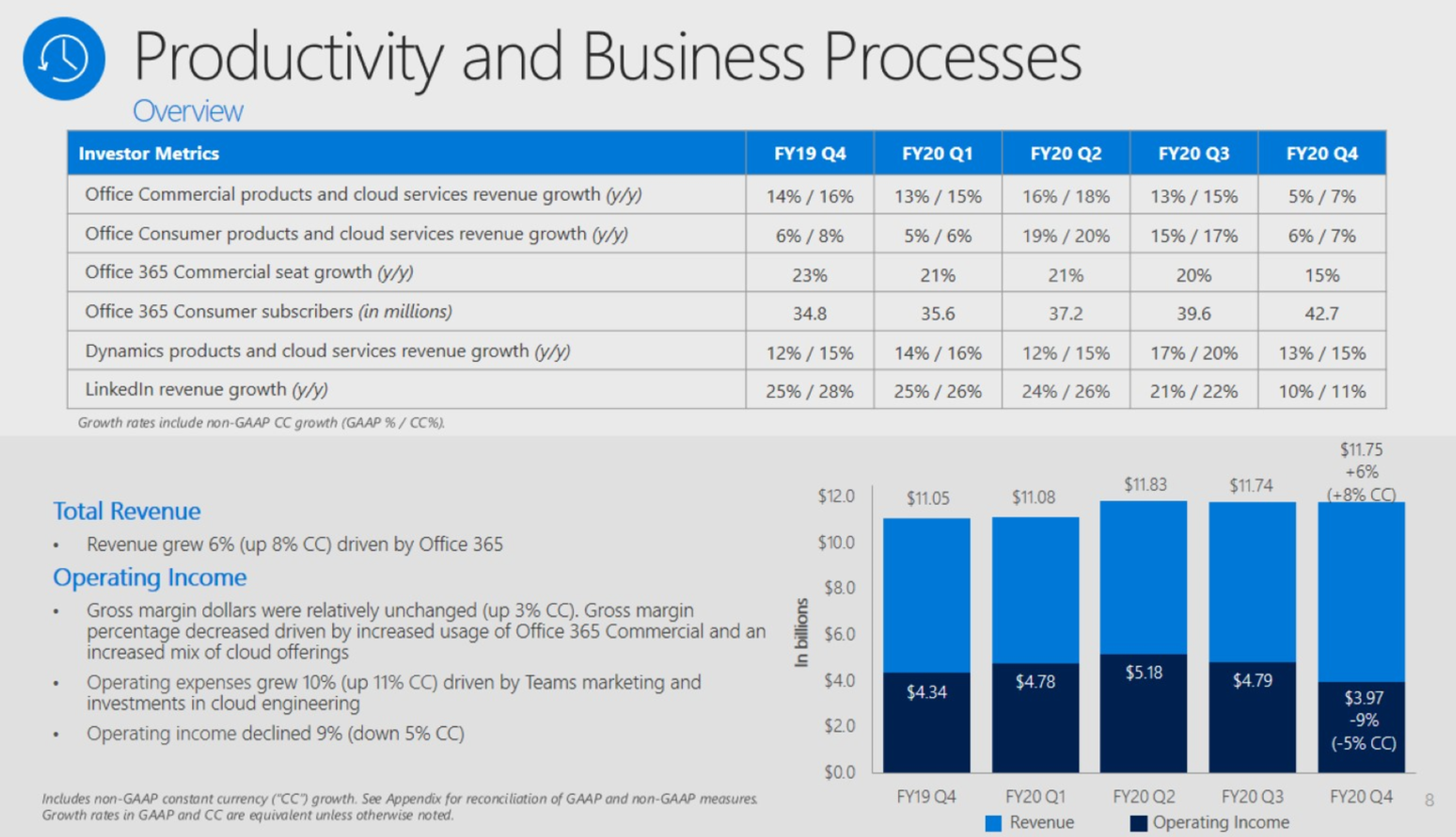 Also keep an eye on the growth rate for Microsoft's Dynamics business apps, which clocked in at 13% in the June quarter. RBC Capital recently reported that Microsoft has been pushing its salespeople to more aggressively sell Dynamics apps, as well as Microsoft's Power Apps custom app development tools. 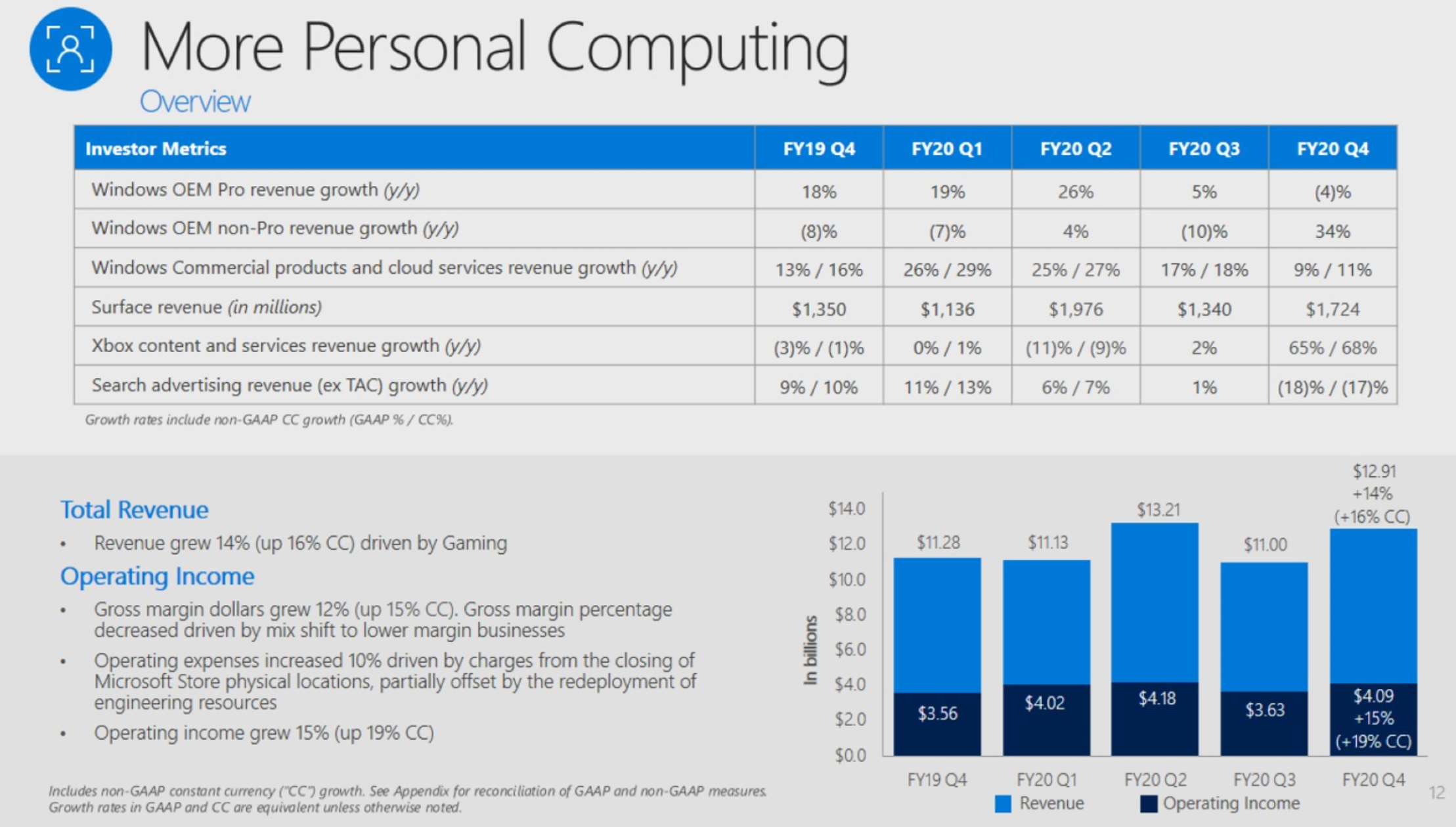 Meanwhile, Microsoft's Windows Commercial and cloud services revenue has been growing like clockwork, aided by rising uptake for Microsoft 365 plans that bundle Windows, Office 365 and enterprise mobility and security software: It grew 9% in the June quarter, and was forecast by Hood to see "healthy double-digit growth" in the September quarter.

These are two businesses that have some pretty obvious near-term tailwinds. In the June quarter, gaming revenue was up 64%, with Xbox content and services revenue rising 65%, and Surface device revenue rose 28% to $1.72 billion.

Microsoft guided for mid-teens Surface growth and high-teens gaming revenue growth, and (though gaming revenue is being impacted by the winding down of Xbox One sales) it wouldn't be surprising to see the company top both forecasts. And looking ahead to the December quarter, the pending Xbox Series X and S launches are a clear growth driver for gaming revenue.

This is a business that has been having a rougher time, as macro pressures weigh on both LinkedIn's ad sales and its Talent Solutions offerings for corporate recruiters. Revenue rose 10% annually in the June quarter (down from the March quarter's 21%), and Microsoft forecast low-to-mid single-digit September quarter growth.

Microsoft remains a pretty steady buyer of its own stock. Buybacks totaled $5.8 billion in the June quarter, and it's quite likely Microsoft spent at least a few billion more on buybacks in the September quarter.