Though it once more topped estimates, a light EPS outlook and mixed demand commentary is weighing on Micron's (MU) stock post-earnings.

As of the time of this article, Micron's stock is down 3.5% in after-hours trading to $48.92. Shares were initially trading following the release of Micron's report, but sold off after Micron shared its earnings presentation and prepared remarks.

Here are some notable takeaways from Micron's earnings report, presentation and call.

The company noted smartphone and auto demand has begun rebounding, with the former market also benefiting from the launch of 5G phones packing more DRAM and NAND flash memory than their 4G predecessors. It also mentioned gaming DRAM demand remains strong, aided by both upcoming console launches and Nvidia's (NVDA) recent gaming GPU refresh, and that while cloud memory demand is expected to moderate some in the second half of 2020 following a first-half surge, it's still healthy overall.

At the same time, Micron said its short-term demand outlook has weakened amid weak enterprise server/storage demand and elevated inventories among some enterprise clients. The company also noted desktop PC sales are weak, that the notebook market (though seeing strong demand) is being impacted by component shortages and that (like other chip suppliers) it stopped supplying Huawei in mid-September due to new U.S. export restrictions. 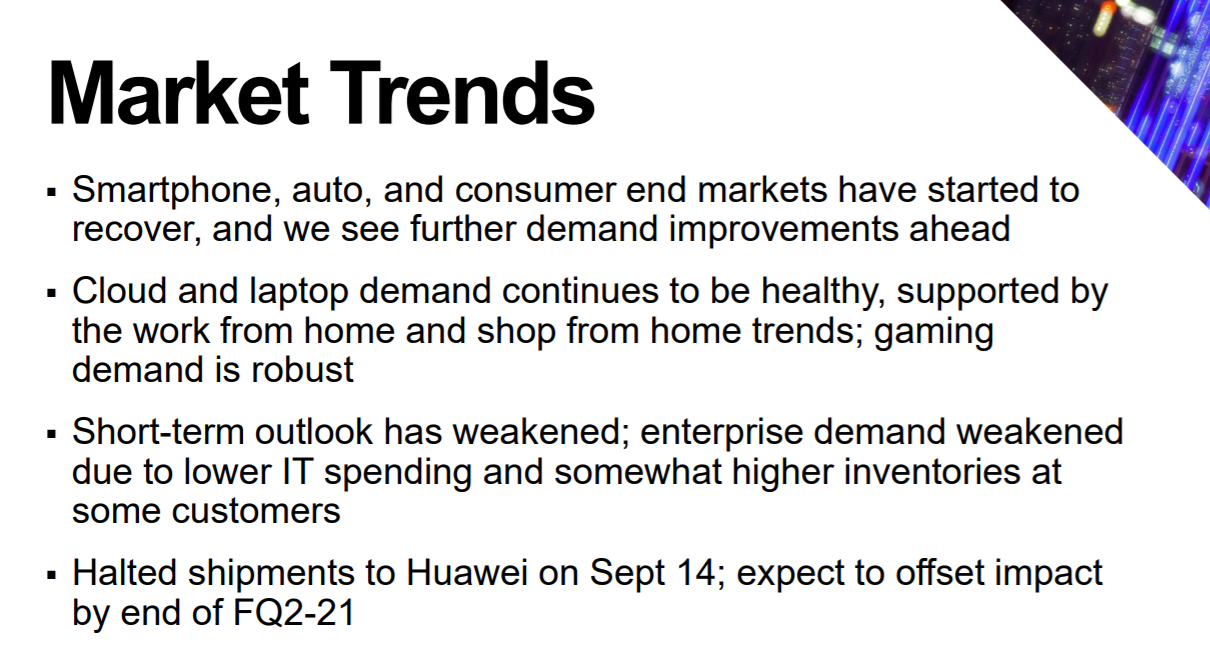 2. Micron Expects DRAM and NAND Demand Growth to Pick Up Next Year

The company does caution (in what might amount to a public message to memory rivals to spend less) that there's a risk of some excess NAND supply being on the market next year unless capex moderates. In the DRAM market, which is mostly consolidated around Micron, Samsung and SK Hynix, Micron expects "disciplined industry capex" to yield improved market conditions in the second half of 2021.

When asked about the latter remark and what it implies for DRAM conditions between now and the second half of 2021, CEO Sanjay Mehrotra said current demand trends and restrained capex "bode well for a healthy [DRAM] environment" in the second half of Micron's fiscal 2021 (i.e., its May and August 2021 quarters).

3. Gross Margin Is Expected to Drop This Quarter

Micron's August quarter non-GAAP gross margin (GM) stood at 34.9% -- up from 33.2% in the May quarter and 30.6% in the year-ago quarter, but -- with DRAM and NAND average selling prices (ASPs) dropping sequentially -- a little below a guidance midpoint of 35.5%. More importantly, Micron issued November quarter GM guidance of 26.5% to 28.5%

CFO Dave Zinsner said that Micron expects margin headwinds during the first half of fiscal 2021 due to a mix shift towards NAND sales relative to DRAM sales, lower memory prices and temporarily higher production costs related to the ramp of Micron's first-gen replacement gate NAND technology and "yield learning" for new DRAM products.

4. SSD Sales Were a Bright Spot

Mehrotra later added that Micron plans to expand its NVMe lineup for the data center SSD market "as we go through fiscal 2021 and calendar 2021," as the market continues shifting towards NVMe relative to SSDs relying on slower SATA interfaces.

5. Capex Is Set to Rise in Fiscal 2021 -- But Less Than Previously Expected

Micron guided for fiscal 2021 (ends in Aug. 2021) capex of roughly $9 billion. That's above reported fiscal 2020 capex of $7.95 billion, but (in line with prior comments) is said by Mehrotra to be "significantly lower than [Micron's] pre-COVID expectations."

Mehrotra also indicated that a large portion of this capex will involve fab-building and the creation of chip assembly and test capacity, rather than wafer fab equipment (WFE) purchases that drive additional bit supply growth. Micron expects both its DRAM and NAND bit supply growth to be below industry averages in calendar 2021.

6. A Small Amount of Stock Was Once More Repurchased

In 2018, Micron committed to spending roughly half its annual FCF on buybacks.

I feel I must raise my hand like I committed a foul.

Is the Market Getting Too Technical?

We're not yet at an either/or market yet, and maybe we won't get there, but the action is starting to look a little be familiar. Let's check the indicators.