It's not hard to see how Lyft  (LYFT) could do well in an environment featuring healthy GDP growth, high inflation, rebounding corporate travel, and a shift in discretionary consumer spending from goods to travel, dining and entertainment.

But for now, the ride-sharing duopolist's stock price -- down 19% year-to-date and 44% over the last 12 months as of the time of this article -- doesn't reflect these positives nearly as much as it should.

A few different factors appear to have weighed on Lyft's shares lately. Perhaps the biggest ones: Lyft -- along with archrival Uber  (UBER) -- has been contending with driver shortages that have boosted its ride prices and led it to spend more driver-acquisition incentives, and shares of both companies have been pressured by a broader selloff in growth tech stocks that has hit unprofitable and lightly profitable companies especially hard.

In addition, Lyft and Uber's shares appear to have been dinged by worries (overblown, I believe) that the Fed's actions will soon trigger a major economic downturn. And more recently, worries (also likely overblown, given what current ride-sharing pricing is like) about the impact of higher gas prices on ride-sharing activity have been a headwind.

All of this has apparently led many investors to overlook how ride-sharing activity is poised to surge in the coming months, as consumers get out more and office reopenings pick up. Both JPMorgan Chase (JPM) and Delta Air Lines (DAL) indicated on their Wednesday earnings calls that they're seeing a strong uptick in proverbial reopening activity among consumers. And one only has to look at Google's (GOOGL)  mobility data or OpenTable's restaurant reservation data to see how there are still major regional disparities in reopening activity that are likely to normalize over time.

And while driver shortages have led ride prices to be higher than what Lyft would prefer them to be, they haven't hurt demand as much as one might think. Lyft's active riders rose 49% annually in Q4 to 18.7 million (admittedly, still below a Q4 2019 high of 22.9 million), even as its revenue per active rider rose 14% to $51.79. To an extent, Lyft and Uber are (like various other online platforms/marketplaces that take a transaction cut) proving to be inflation beneficiaries. 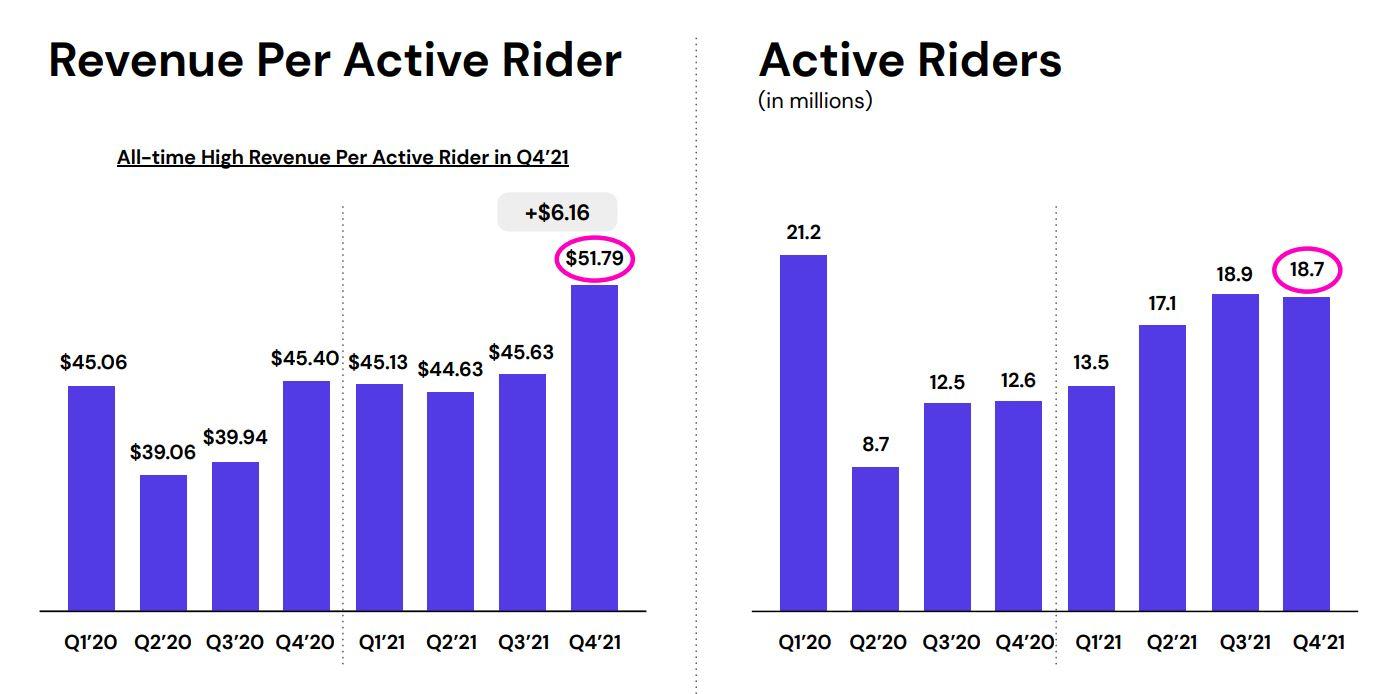 So why should investors pick Lyft over Uber? I think one good argument for doing so is that Lyft is far more of a U.S. reopening pure-play than Uber is.

Uber has in recent quarters been getting over half its gross bookings from its food-delivery segment, and it gets over 40% of its revenue from outside of North America, with a portion of these sales coming from markets with relatively challenging macro environments. Lyft, by comparison, gets nearly all of its revenue from transportation services provided in the U.S. and Canada (the company does have a white-label food-delivery service, but it's in its early stages and doesn't appear to be a major revenue contributor yet).

Perhaps just as importantly in the current market environment, Lyft (aided by restructuring efforts it carried out in 2020) appears to be running itself more efficiently than Uber, in spite of its smaller scale. Whereas Uber is expected to lose money again this year, the FactSet consensus is for Lyft to generate $242 million in operating income this year, followed by $597 million next year.

Lyft's 2023 non-GAAP EPS consensus estimate stands at $1.23, and it wouldn't be surprising to see that estimate, which is underpinned by expectations of 33% 2022 revenue growth and 25% 2023 revenue growth, get taken higher in the coming months as reopening activity picks up. Ultimately, Lyft's stock, which closed at $34.80 on Wednesday, might be trading for around 20 to 25 times its likely 2023 EPS, and perhaps around 2 times its likely 2023 revenue.

For a company that has a duopoly position in a market that still has a long growth runway ahead of it, and which can do pretty well in an environment where inflation is running high and consumers are eager to spend on services, such a valuation looks quite reasonable.

Get an email alert each time I write an article for Real Money. Click the "+Follow" next to my byline to this article.
TAGS: Investing | Stocks | Trading | Technology | U.S. Equity