As Alphabet's (GOOGL) massive search ad business keeps humming along, some big-name online travel companies are feeling ill effects from the changes Google has made to how paid and non-paid search results appear.

Just ask Expedia (EXPE) , whose shares fell 27% post-earnings on Thursday. The online travel giant soundly missed Q3 EPS estimates even though its revenue and bookings were nearly in-line, and cut its full-year guidance for adjusted EBITDA growth to a range of 5% to 8% from a prior range of 12% to 15%. And its management made it pretty clear on the earnings call that Google (though not the only culprit) has a lot to do with the bottom-line pressures it's currently facing.

"Generally, what we saw was a continued shift of essentially the free links further down the [search] page by other modules that were inserted and ultimately a shift of traffic from the SEO channel over to some of the other products," Okerstrom added during the Q&A session. Those "other products" are a reference to the hotel and flight search modules that now often appear at the top of Google search results pages when conducting travel searches. 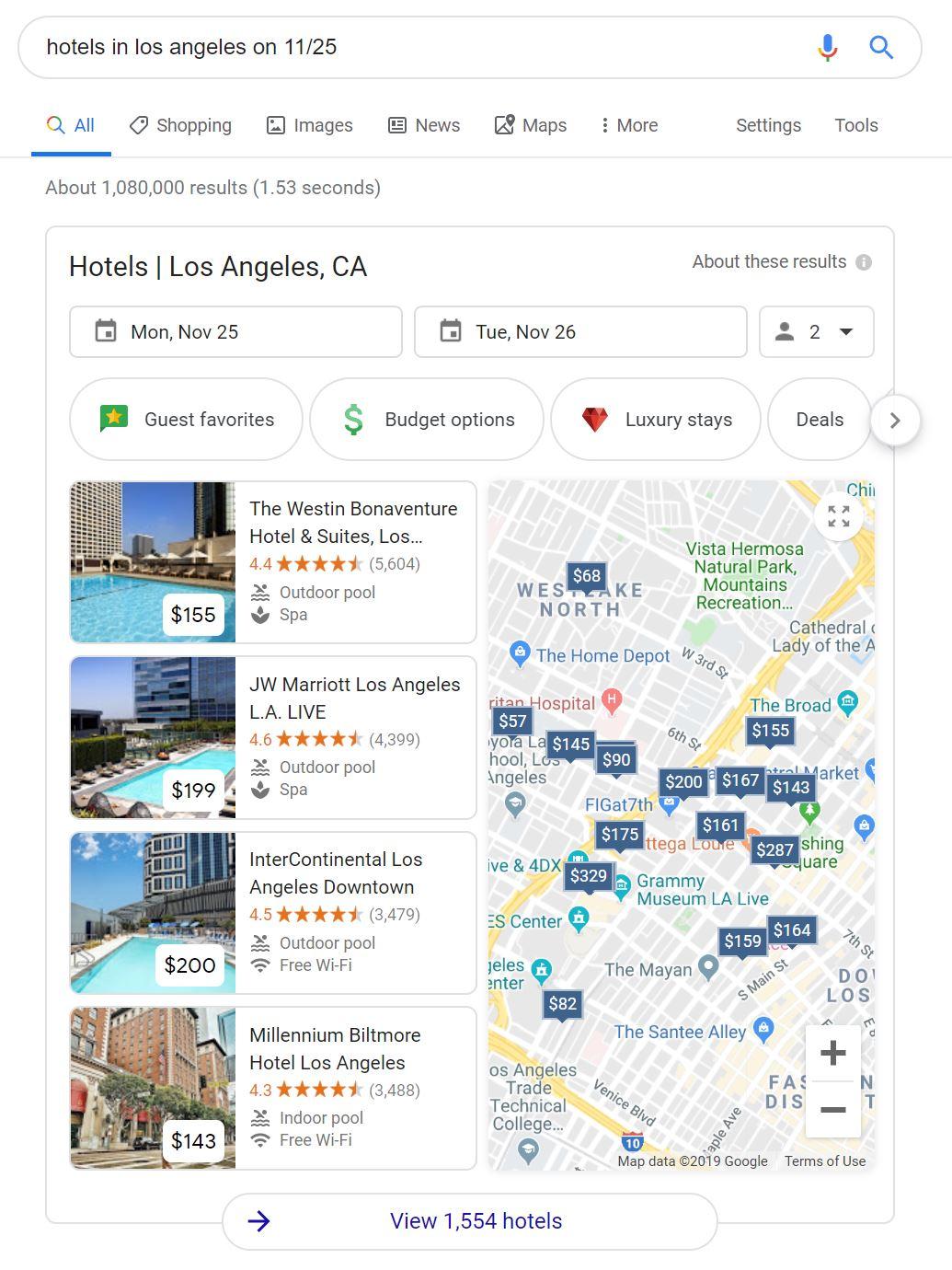 An example of how a Google hotel search ad module appears within travel search results.

Properties from Expedia and other major online travel players tend to be well-represented in these modules, as are the websites of hotel chain owners and airlines. However, the traffic that the modules generate comes at a price, with Google collecting revenue either whenever a user clicks on a link to a website or whenever a link click leads to a booking, depending on how a travel firm chooses to bid for placement.

Expedia isn't the only travel firm seeing a bottom-line hit from a change in its Google traffic mix. TripAdvisor (TRIP) , which also missed Q3 estimates and plunged post-earnings this week, said it saw "incremental SEO headwinds" in Q3.

"I think you're seeing this across the industry as Google has gotten more aggressive," said CEO Steve Kaufer on TripAdvisor's earnings call. "[We] know that this SEO [issue] is an ongoing trend and we're not predicting that it's going to turn around."

Relatively speaking, Booking Holdings (BKNG) , which is up 2% post-earnings on Friday after dropping 8% on Thursday thanks to Expedia and TripAdvisor, is faring well. While Booking's Q4 EPS guidance was below consensus, this was blamed on macro headwinds that are weighing on revenue and bookings in international markets that collectively account for the lion's share of its business, rather than Google-related issues.

Booking topped Q3 EPS estimates and reported that its "performance marketing" spend, much of which goes to Google, actually fell 2% annually to $1.29 billion (26% of revenue) amid an ongoing shift in Booking's traffic to direct visits to its websites and apps. As those numbers signal, Booking is less dependent than Expedia on search ads to drive travel bookings. It's also worth noting that (according to research done by Mizuho analyst James Lee), Booking gets a higher overall return on the ad dollars that it does spend.

On Booking's call, CEO Glenn Fogel admitted his company "saw some headwinds in the SEO channel" in Q3. But he insisted that the headwinds were modest, given that organic search is "a small channel" for Booking.

As for Google itself, Q3 appears to have been business as usual for its search ad operations. Total ad sales on Google properties, the vast majority of which comes from Google Search and (to a lesser extent) YouTube, rose 19% annually in Q3 to $28.65 billion, topping a $28.43 billion consensus. Paid ad clicks on Google properties rose 18%, while the company's average ad price (pressured some by YouTube and smartphone ad growth) fell a modest 2%.

All signs suggest that Google, aided by its scale, user data and massive investments in both improving its mobile search experience and creating more effective ad solutions for marketers large and small, as well as a continued secular shift towards online ad spending relative to offline channels, will keep seeing strong search ad growth in the near-to-intermediate term.

But it's worth keeping in mind that some of this growth isn't being fueled by higher search volumes or the launch of more effective ad products, but from dedicating more screen real estate to paid search results relative to organic ones. And considering how much real estate is often dedicated to ads already, this isn't a trend that can be expected to go on forever.

Get an email alert each time I write an article for Real Money. Click the "+Follow" next to my byline to this article.
TAGS: Investing | Technology | E-Commerce |