As eBay (EBAY)  appeases activist investors by inking a $4.05 billion deal to sell StubHub and exploring a sale for its Classifieds business, its core online marketplace operations are still having a rough time.

eBay is coming off a Q3 during which its Marketplace operations saw gross merchandise volume (GMV) drop 5% annually in dollars and 2% in constant currency (CC) to $20.49 billion. Revenue growth was a little better thanks to an improved take rate -- Marketplace revenue was $2.08 billion, down 1% in dollars and up 1% in CC -- but still nothing to brag about for a quarter during which the Census Bureau estimates total U.S. retail e-commerce sales rose 17.3% annually.

eBay also registered 1% Marketplace GMV declines in CC (and bigger declines in dollars) during both Q1 and Q2 of 2019. And with the company having guided for its total Q4 revenue to be down 2% to 4% annually, it doesn't look as if this quarter will be any better. 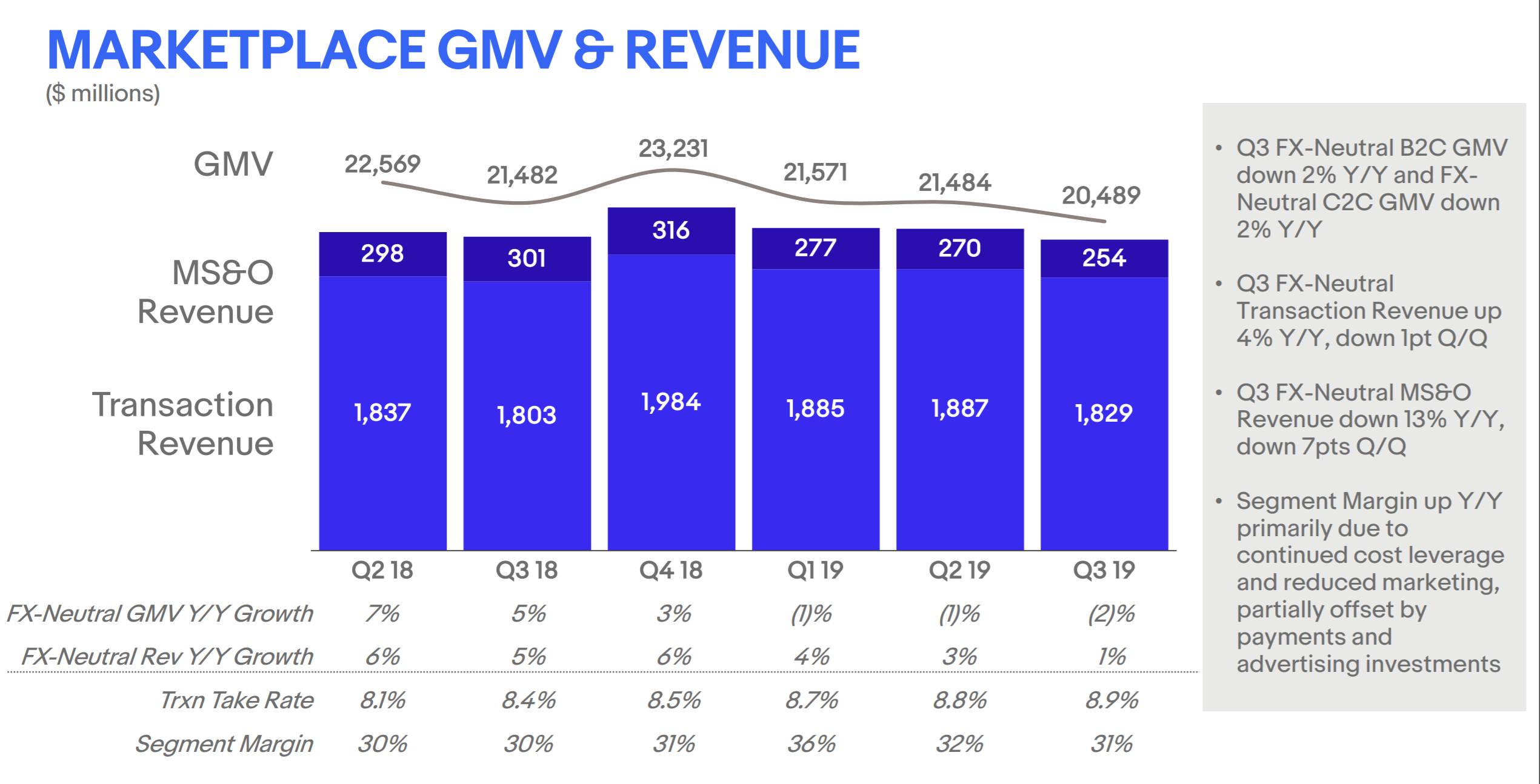 Amazon.com  (AMZN) naturally looms large here. Jeff Bezos' firm is coming off a Q3 during which its revenue rose 24% annually, with direct e-commerce revenue growing 21% and third-party seller services revenue growing 27%. And while Amazon did guide for revenue growth to slow to a range of 11% to 20% in Q4 (given its recent track record, the guidance might be conservative), a Q4 performance near the low end of that range would still be a lot better than what eBay is forecasting.

Amazon's 1-day Prime shipping initiative has given it a top-line lift this year. And -- in a move that's bound to impact eBay, which handles a lot of low-cost transactions -- Amazon has become more willing this year to provide free Prime shipping for sub-$5 items on a standalone basis.

eBay's Marketplaces, whose shopping experience for many goods still leaves a lot to be desired, are also dealing with a slew of other competitive threats. The tremendous growth collectively seen by direct-to-consumer (D2C) e-commerce startups, many of which lean heavily on Shopify's (SHOP) tools and Google/Facebook advertising, is also a problem.

The same could also be said for the growth being registered by Etsy  (ETSY) and various other specialized marketplaces. And though it has competed more against Craigslist to date, Facebook's (FB) Marketplace platform is starting to become a competitive threat to eBay's marketplaces as well.

Also, eBay's current standing (or lack thereof) with younger consumers is a problem. In a recent Piper Jaffray survey of U.S. teens, just 2% of teens named eBay their favorite shopping website. Amazon, by comparison, received 52% of the vote.

eBay does still have some competitive strengths it can lean on. eBay's selection for various collectibles, vintage goods and other long-tail items often remains unmatched; it can be the best place to look for used goods in many categories; and -- though Amazon's recent moves are starting to neutralize this edge -- the fact that it tends to charge lower commissions than Amazon can still yield a cost advantage when shopping for items such as cheap electronics accessories.

And just maybe, eBay can use the windfall it will get from its StubHub sale -- and perhaps a second windfall from an eBay Classifieds sale -- to make a smart acquisition or two to strengthen its e-commerce position. Making an overture to Etsy, which currently has a $5.1 billion market cap and is expected to see its GMV rise 24% this year to $4.89 billion, is one possibility.

In addition, one making a devil's advocate argument could also cite its low valuation. Shares are only trading for 13 times a 2019 EPS consensus of $2.77.

Nonetheless, the numbers currently paint a bleak picture for eBay's Marketplace business, as does the collective momentum of its various well-run competitors. Until eBay provides good reasons to think that it can at least significantly reduce its share losses to these rivals, its stock looks like a value trap.

Get an email alert each time I write an article for Real Money. Click the "+Follow" next to my byline to this article.
TAGS: Takeover Possibility | Investing | Technology

Jim Cramer: Here Are 10 Stocks for a Stay-at-Home Pandemic

These companies should continue to work, while we wait for a cure or a vaccine or the darned virus to run its course.

VMware Could Test Critical Support in the Weeks Ahead

Let's look at the charts as the company gets set to report quarterly results.

Microsoft Stock Is on the Defensive: What Investors Can Expect Now

Let's check out the charts and indicators to get a sense of the downside risk.

How to Play Workday With Earnings on Tap

Let's see how the charts and indicators are positioned ahead of the numbers.