Though not perfect, Electronic Arts' (EA) results and guidance are a good reminder of what's still going right for the company following a mountain of bad publicity related to two disappointing game launches.

EA's shares are up slightly after the gaming giant beat March quarter revenue, EPS and net bookings estimates, and (though its June quarter outlook is a little light) issued solid full-year guidance. Following a fiscal 2019 during which revenue fell 4% amid weaker-than-expected sales for first-person shooter Battlefield V and online role-playing game Anthem, EA expects revenue to rise 9% in fiscal 2020 (it ends in March 2020) to $5.375 billion. And following a 5% drop in net bookings in fiscal 2019 to $4.94 billion, net bookings are expected to rise 3% (4% excluding forex) to $5.1 billion.

For a variety of reasons, Battlefield V and Anthem haven't lived up to expectations. In addition, EA is dealing with a transition year for its mobile games business -- mobile net bookings are expected to fall 10% to 15% in fiscal 2020, ahead of the launch of two new games -- along with cyclicality for its FIFA franchise (the World Cup boosted 2018 FIFA sales) and a game console cycle that's nearing its end.

But on the bright side, the company's FIFA and Madden franchises are still in very good shape, and it should have a solid game lineup for the back half of 2018. Four new sports titles are launching in the September quarter, and the December quarter will see the launch of new Need for Speed and Star Wars games (and possibly, a new Battlefield title).

Just as importantly, EA is still seeing good momentum for its live services offerings, which (thanks to in-game purchases and other revenue streams) both grow the amount of long-term revenue it can obtain from gamers and make the company a little less dependent on individual game launches. Net bookings for EA's live services offerings, which include Ultimate Team modes for FIFA and Madden, as well as content for The Sims 4 and recently-launched battle royale game Apex Legends, rose 10% in fiscal 2019 to $2.41 billion, and are expected to grow 10% to 15% this year. 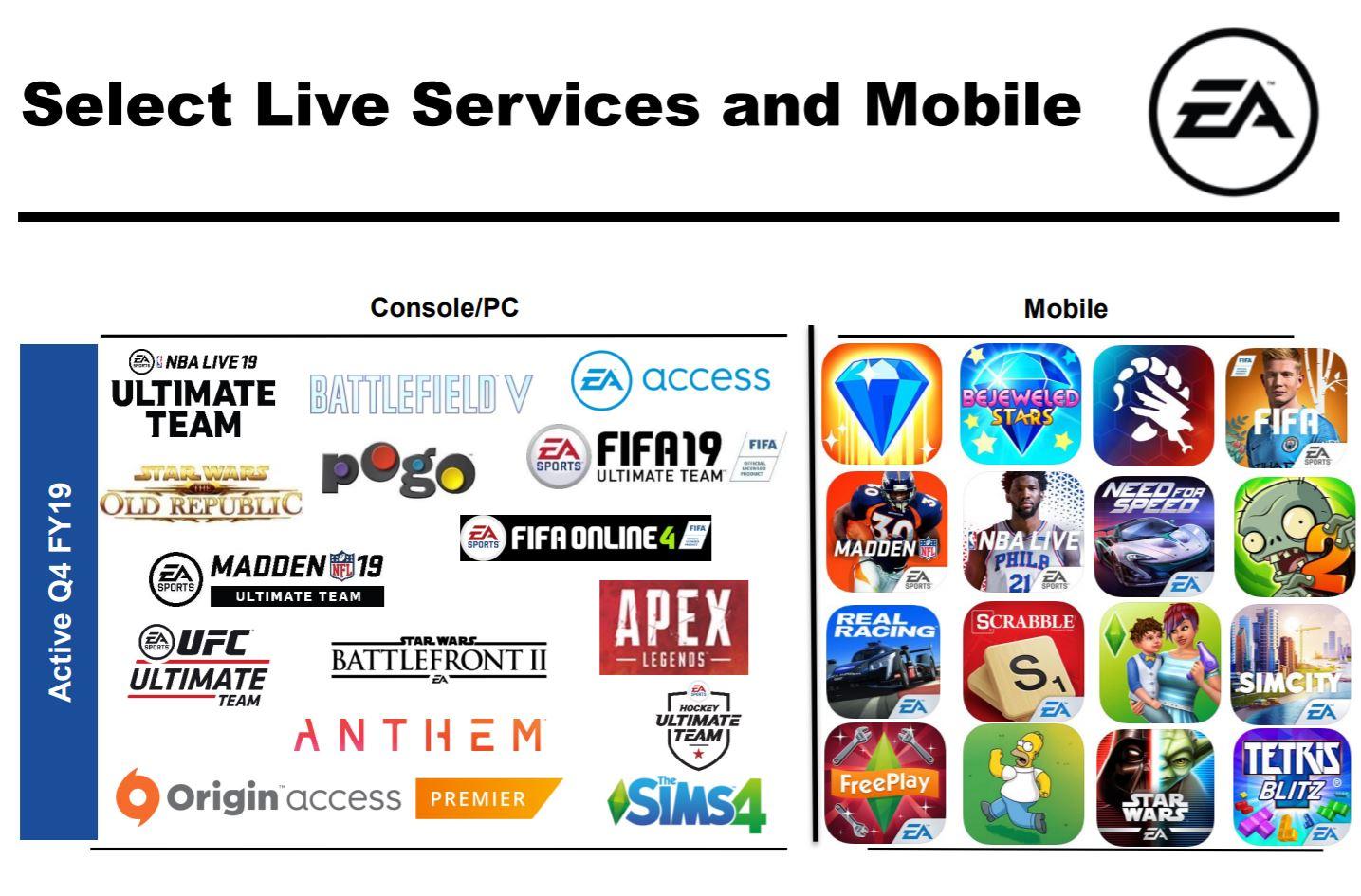 EA has also seen a bit of traction for its game-subscription services -- they rely on game downloads rather than cloud streaming -- with the company reporting over 3.5 million subscribers across PCs and consoles. The summer arrival of the EA Access service (currently available on the Xbox One) on the PlayStation 4 should provide a boost to subscriptions. At the same time, it's worth keeping an eye on the impact that Microsoft (MSFT)  and Alphabet/Google's (GOOGL) upcoming cloud gaming services have on EA's subscription momentum.

On the whole, while EA is clearly facing some near-term headwinds, its overall business is still on fairly solid ground, and (with its stock down 38% from an all-time high set last summer) a lot has already been priced in. Certainly, the pessimism that existed as EA plunged in February following its December quarter report looks quite overdone right now.
Get an email alert each time I write an article for Real Money. Click the "+Follow" next to my byline to this article.
TAGS: Investing | Technology