Like chip stocks, security hardware, software and service providers have outperformed this earnings season. On Friday, the group got a boost from strong reports delivered by Proofpoint ( PFPT)  and Symantec ( SYMC) .

Proofpoint, whose product line includes e-mail security, cloud app security and data loss prevention (DLP) software, rose 12.4% on Friday after it soundly topped Q4 estimates while reporting 35% revenue growth and 43% billings growth. The company also issued an above-consensus Q1 revenue outlook -- full-year sales guidance is only in-line, but might be conservative -- and forecast its free cash flow (FCF) will grow over 25% this year to a range of $196 million to $200 million.

Symantec, which has long been struggling with competitive and execution issues and last year dealt with an accounting probe, rose 9% after beating December quarter estimates and issuing in-line March quarter guidance. Though Symantec's numbers weren't great -- revenue fell 1%, billings fell 3% and March quarter sales guidance implies a 2% revenue drop at the midpoint -- they're better than feared for a company that saw a 7% revenue drop in the September quarter, enough so to overshadow the company's disclosure that CFO Nick Noviello will stepping down later this year.

Enterprise security spending has grown much faster than total IT spending in recent years, as major data breaches give companies additional motivation to invest more in protecting from their networks to their endpoint devices to their apps, data and employee credentials. Last August, research firm Gartner estimated IT security spending would grow 12.4% in 2018 to $114.2 billion, and 8.7% in 2019 to $124.2 billion.

The dollar's recent strengthening might (by decreasing the dollar value of sales recorded in foreign currencies) lead 2019 growth to be a little lower than Gartner's forecast. However, it should still easily outpace total IT spending growth, which was forecast by Gartner in October to come in at 3.2% this year.

But while healthy secular growth trends remain a tailwind for security tech firms, investing in the space carries some risks. Valuations for some (though not all) security tech firms have gotten stretched -- Proofpoint, just to give one example, now trades for 28 times the midpoint of its 2019 FCF guidance range. In addition, a number of investors have voiced concerns that the enterprise security space has gotten overcrowded, with a huge number of public and private firms spending heavily to pursue a relatively limited number of deals.

Against this backdrop, Action Alerts Plus holding Palo Alto Networks (PANW) looks like a relatively low-risk way to play the space. The company has long been a top provider of next-gen firewalls, and is seeing brisk demand for subscription-based software and services offerings responsible for tasks such as detecting malware and protecting endpoints. Shares still only trade for 15 times Palo Alto's fiscal 2020 (ends in July 2020) FCF consensus, and with Palo Alto now doing over $3 billion in annual billings, the company might not be too badly stung if it loses a deal or two to a desperate rival.

The ETFMG Prime Cyber Security ETF (HACK) is another relatively low-risk option. The ETF possesses more than 50 holdings -- the list runs the gamut from larger players such as Palo Alto and Cisco Systems  (CSCO) to smaller firms such as Varonis Systems (VRNS)  and Rapid7 (RPD)  -- and all holdings accounting for less than 5% of the fund's assets.

There's a common theme running through the smartphone sales estimates issued by research firms over the last couple of weeks: Global smartphone demand is slumping, and China has much to do with it.

Research firm IDC believes smartphone shipments fell 4.9% annually in Q4, after having dropped 6% in Q3. Samsung (SSNLF) , the world's biggest smartphone maker by volume, is believed to have shipped 70.4 million units, down 5.5%. Apple (AAPL) , which is no longer breaking out iPhone (and iPad and Mac) unit sales, is believed to have shipped 68.4 million iPhones, down 11.5%.

With Apple having reported that its iPhone revenue fell 15% annually in the December quarter to $51.98 billion, IDC's estimate would imply an iPhone average selling price (ASP) of $760, down from $796 a year earlier but still far above the industry average.

Notably, IDC thinks the third, fourth and fifth biggest smartphone OEMs, China's Huawei, Oppo and Xiaomi, all grew their shipments in Q4, with Huawei registering 44% growth and Oppo and Xiaomi growing less than 10%. However, IDC also thinks smartphone makers outside of the top 5 -- a group that includes names such as Lenovo, LG and Sony -- collectively saw their shipments drop 18.5%. 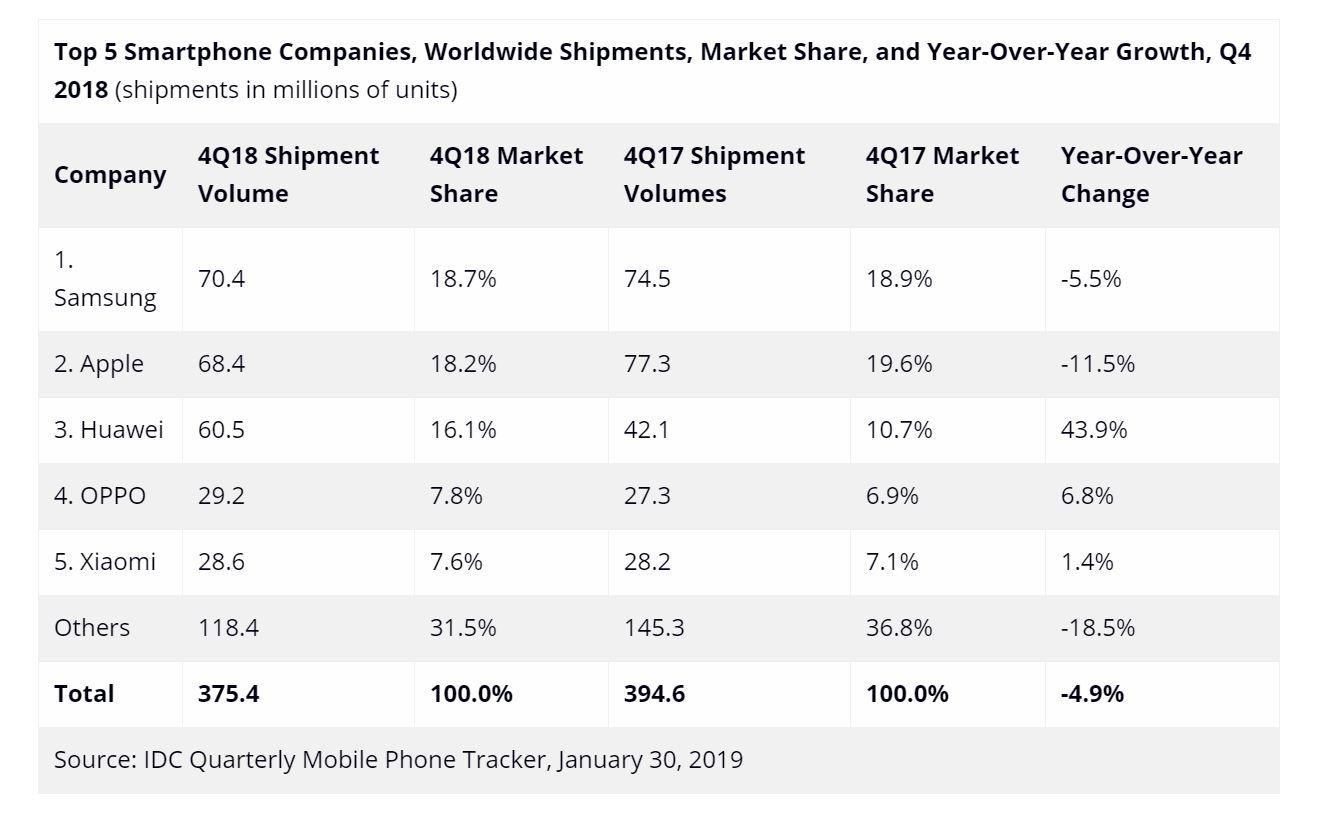 China, of course, had much to do with Apple's early-January sales warning. This week, the company reported its "Greater China" revenue fell 27% in the December quarter to $13.2 billion. Other regions saw revenue growth ranging from negative 5% (Japan) to positive 5% (the Americas).

While Chinese macro issues are clearly a problem for the industry, lengthening upgrade cycles are also an issue. It's worth remembering here that close to 1.5 billion smartphones were sold in 2017 -- this is a consumer electronics market that dwarfs all others, and its recent declines are coming after having grown to a once-unimaginable scale.

With 5G and foldable phones -- two technologies that could conceivably boost upgrade activity in time -- still in the early stages of being commercialized, 2019 could very well be a rough year for smartphone demand as well (2020 might be better). As signaled by Taiwan Semiconductor's (TSM) recent earnings report, some chip suppliers could still see their mobile sales grow in 2019 as 5G and other technologies grow the amount of chip content going inside of the average phone.

However, hardware volumes are likely to remain under pressure. That raises the incentive for Apple and other smartphone makers to grow their top lines, by doing things such as growing sales of value-added services and complementary hardware (like, say, App Store transactions, Apple Music subscriptions and the Apple Watch).

What's Separating Chip Stocks From One Another This Week

Last week, chip stocks rallied almost across the board (Intel (INTC) was the only major exception) as better-than-feared reports from Texas Instruments (TXN) , Lam Research (LRCX) , SK Hynix and others led investors to decide the huge multiple compression the sector had seen was overdone.

This week, responses to chip stock earnings reports have been a lot more varied. For example, Nvidia (NVDA) was hammered on Monday following a sales warning blamed on a mixture of company-specific issues and broader demand pressures, but AMD (AMD) soared a couple days later as its weak Q1 guidance was overshadowed by a solid full-year outlook.

iPhone chip suppliers -- many of which have been sporting pretty low multiples -- gained moderately after Apple (AAPL) issued somewhat better-than-feared March quarter guidance. Samsung (SSNLF) largely held steady after posting a Q4 report in which it unsurprisingly reported a double-digit annual drop in memory chip revenue to go with smartphone pressures and forecast demand would be soft in the near-term before improving in the back half of 2019.

Meanwhile, although peers Silicon Labs (SLAB) and (to a lesser extent) Maxim Integrated (MXIM) sold off earlier this week on disappointing guidance, Cypress Semiconductor (CY) is up about 8% in Friday trading after it beat Q4 estimates but guided for Q1 revenue of $520 million to $550 million, down 5% to 11% annually and below a consensus estimate of $558.4 million.

In addition, though customer inventory corrections are taking a toll on many parts of Cypress' business, there is a bright spot or two. On Cypress' call, the company reported that its automotive revenue, which is benefiting from healthy demand for Cypress' microcontrollers (MCUs) and Wi-Fi/Bluetooth connectivity chips, grew 19% annually in Q4, and that its USB-C controller chip sales were strong outside of sales to Apple.

And though Cypress' NAND flash memory business -- set to be offloaded to a JV involving SK Hynix -- slumped, the company says its NOR flash business grew 7% sequentially. In a recent interview, Cypress CEO Hassane El-Khoury was eager to talk about how Cypress' efforts to focus its NOR business on differentiated products sold via long-term contracts is insulating it during the current downturn.

Times are clearly tough for much of the chip industry right now. In such an environment, unless a company has a strong company-specific growth story that can help it weather the storm (like, say, AMD or Xilinx (XLNX) ), low valuations tend to be the best insurance policy for investors. Cypress fits the bill here, as do a slew of memory and mobile chip suppliers.