Cree (CREE)  has seen quite the makeover during the past few years.

Not too long ago, Cree was best-known as an LED component and lighting product supplier. But today, following a $310 million deal to sell the LED lighting business that closed in May, Cree gets the majority of its revenue, along with the lion's share of its gross profit, from its Wolfspeed power semiconductor and materials unit.

Cree accounts for more than 60% of the world's production of silicon carbide (SiC), a compound that's used to make chips that can handle much higher temperatures and voltages than standard silicon. Though SiC chips tend to cost more, their thermal properties allow them to deliver much higher power densities, faster power switching speeds and/or lower power switching losses than comparable silicon chips.

Thanks to their properties, SiC chips have long been used in aerospace and defense equipment. And in recent years, SiC chip sales have grown rapidly within the electric vehicle and -- via the adoption of RF transistors that have a material known as gallium nitride (GaN) layered on top of an SiC substrate -- mobile base station markets. Growing uptake has also seen within the solar inverter market and various industrial end-markets. 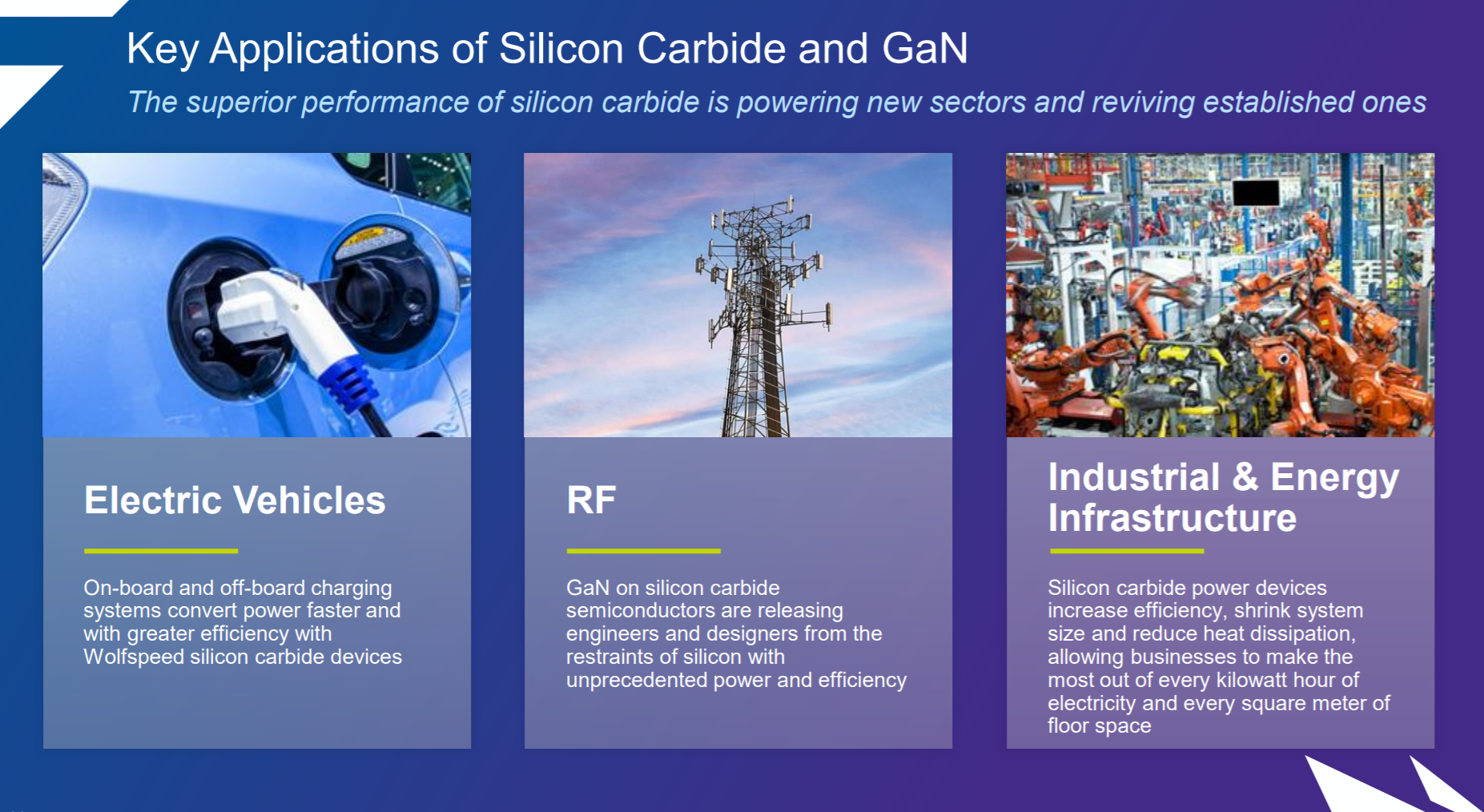 Wolfspeed has a two-pronged strategy for profiting from SiC adoption: Selling bare and epitaxial chip wafers to third-party chipmakers such as STMicroelectronics (STM) , Infineon and ON Semiconductor (ON)  -- its deal with STMicro was recently expanded -- and selling internally-designed chips. To aid the latter effort, Cree spent €345 million ($380 million) last year to buy Infineon's RF power chip business.

Amid halted sales to Huawei, slower Chinese EV demand and some 5G rollout delays, the consensus is for Wolfspeed's revenue is expected to drop 7% in Cree's fiscal 2020 (it ends in June 2020) to $502 million. However, revenue is expected to more than double by fiscal 2023, as wafer sales keep growing and major electric car and 5G base station design wins ramp.

At its November 20th Investor Day, Cree estimated that Wolfspeed's GaN RF addressable market would total $2 billion in 2024, and that its addressable market for silicon carbide power chips for total $5 billion. During a talk with TheStreet, Cree CEO Gregg Lowe shared a number of details about both opportunities.

Cree has long argued that the technical demands of 5G base stations -- their need to support very high data rates, as well as higher frequency bands featuring very wide bandwidths -- will drive the adoption of GaN-on-SiC RF transistors, which can support much higher power densities than alternatives. Lowe, for his part, said that the adoption rate for SiC within base stations "certainly goes above 50%" as the market transitions from 4G to 5G. 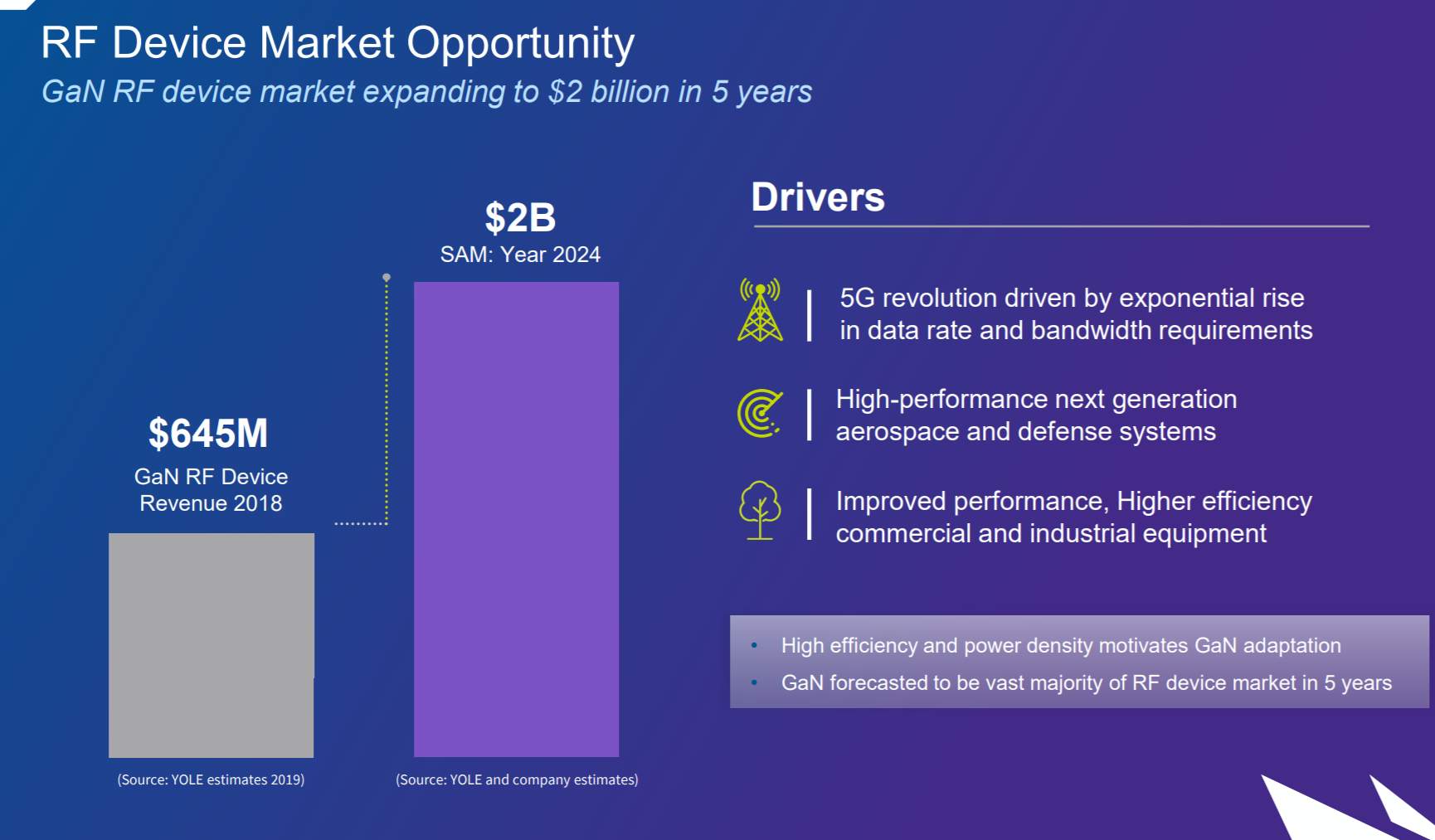 When asked about Cree customer engagements, Lowe noted (as previously disclosed) that the company has "a lot of exposure" to Huawei. But (without naming names) he added that Cree also has good relationships with "the other 4 or 5 players that are out there as well." This is a group that includes Nokia (NOK) , Ericsson (ERIC) , ZTE and Samsung.

"Pretty much all of them are moving to gallium nitride, and they see us as a really strong player there," Lowe said. He added that one "very large" base station vendor has only been using SiC chips for the past 3 years.

There is some competition in the GaN-on-SiC market from Qorvo  (QRVO) and a handful of other players. When asked about Wolfspeed's competitive strengths in this space, Lowe argued its "soup-to-nuts" chip manufacturing, design and packaging capabilities help set it apart.

Cree says Wolfspeed has a $9 billion "opportunity pipeline," and close to half of that involves automotive opportunities. In addition, Lowe has previously estimated that electric cars will contain between $300 and $600 worth of SiC components. When I asked about what can drive a car's needs towards the high or low end of that range, he said it tends to depend on a car's power needs, which in turn are impacted by its acceleration/performance. 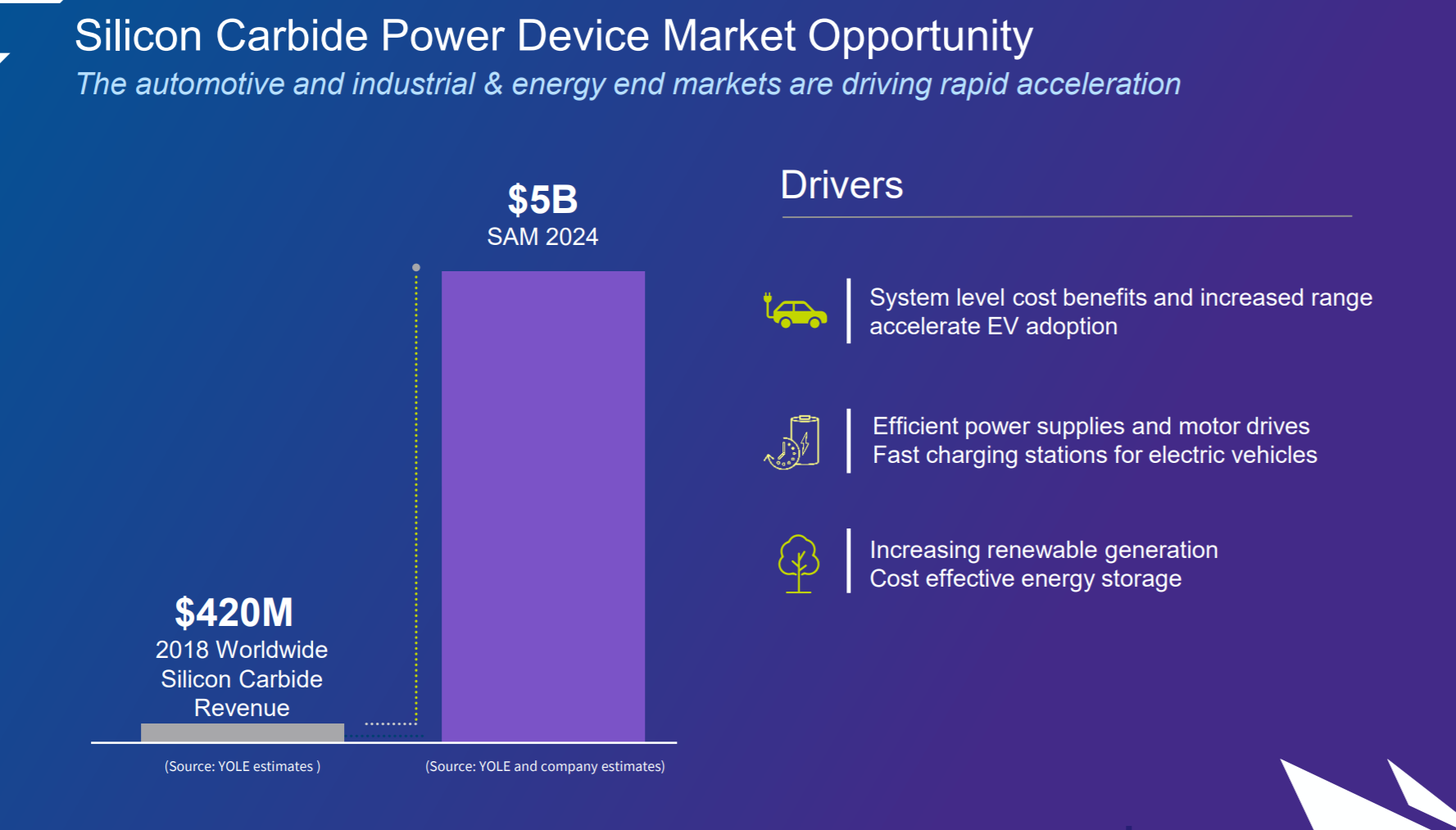 There are three subsystems within electric cars that could use SiC power semiconductors: Their DC/DC converters, their battery chargers and their main inverters, which convert a battery's DC power into AC power that can be used by a car's powertrain. The chips are also used within DC fast-charging stations.

Cree asserts that the use of SiC power chips boosts an electric car's range by 5% to 10% relative to the use of silicon chips when battery size remains constant, while also yielding cooling, space and weight advantages.

Lowe noted SiC already has a "pretty decent" penetration rate within on-board battery chargers, particularly in China where SiC has long been used. But SiC inverter adoption is at an earlier stage. Tesla  (TSLA) was the first EV maker to adopt them, with the Model 3 using 650-volt SiC inverters supplied by STMicro. However, Lowe forecast "dozens of companies" will be using SiC inverters by the 2022-2024 timeframe.

Supplying and Competing Against Other Chipmakers

Though declining to say whether it's currently bigger than Wolfspeed's SiC power chip business, Lowe did say that Wolfspeed's materials sales to third-party chipmakers are growing faster. And he forecast that this will remain the case during the next couple of years, before Wolfspeed sees production ramps for major automotive design wins in the 2022-2024 timeframe.

What does Cree see as its main competitive strengths relative to chipmakers -- some of which have well-established automotive and industrial chip businesses -- that are using its SiC to offer rival products? Among the things Lowe mentioned: The performance of Cree's power chips, which were said to rate well in terms of an industry metric known as RDS(on); its historical strength in the defense/aerospace market; its 3 decades of experience working with SiC; and the fact that (since Cree accounts for so much of the world's SiC production) automakers trust it to be a reliable supplier.

Producing its own SiC crystals and wafers also gives Cree a materials cost advantage. And a planned $1 billion manufacturing expansion should help significantly lower the company's per-wafer materials costs. Lowe sees the expansion not only boosting Cree's economies of scale, but also providing it with "more cycles of learning" to help improve its manufacturing quality and yields.

There are a few other SiC producers of note, with II-VI  (IIVI) being the largest of the bunch. When asked if Cree has been seeing any price pressure from these rivals, Lowe observed that Cree's materials sales are heavily tied to long-term supply agreements, which in turn limits its exposure to spot pricing changes.

Though getting less attention than its automotive and mobile infrastructure efforts, Cree also sees room to significantly grow SiC's penetration within industrial end-markets. Last week, the company announced a deal with industrial and power systems giant ABB under which Wolfspeed's chips "will be included as part of ABB's power semiconductor product portfolio" for power grids, industrial equipment and transportation systems.

Lowe asserted that growing SiC's industrial penetration is more about increasing customer awareness than about needing to drive additional price or performance improvements, and added that growing automotive SiC adoption is helping drive this awareness. One example given of SiC's industrial potential: ABB estimates that a large ship could see fuel savings of up to 30% from using SiC power chips, thanks in part to the weight reduction that would come from needing fewer electrical cables.

Cree's industrial efforts also include a reseller deal with major chip distributor Arrow Electronics (ARW) , which has thousands of salespeople and engineers it can potentially deploy to drive Wolfspeed design wins. Lowe says the Arrow deal has generated $1.5 billion worth of "opportunity pipeline" to date.

Wolfspeed has also been going after the solar inverter market. However, Lowe downplayed this business a bit, forecasting it will see "decent growth" but indicating Wolfspeed's opportunity here is around a "couple hundred million dollars." He added that SiC's penetration in this space depends on the size of a solar field and the inverters needed (the bigger the better).

Plans for the LED Component Business

At its Investor Day, Cree announced a major business model change for its LED component business, which has struggled to grow amid price pressure, trade uncertainty and intense Asian competition. Going forward, the business will gradually transition to a fabless model in which it relies on sapphire substrates sourced from third parties, rather than (as it has historically done) internally-manufactured SiC substrates.

Given this strategy change, which eliminates a historical synergy between LED business and Wolfspeed, is Cree open to selling its LED component ops the way that it sold its LED lighting business? Lowe wouldn't say that. Rather, he talked up the value of the strategy change, arguing that it will help the LED business "become more nimble," improve its cost structure and eliminate manufacturing overhead that would compress margins during a downturn.

Lowe also pointed out that transitioning the LED business to a fabless model will benefit Wolfspeed, since it will allow Wolfspeed to use SiC crystal growth machines previously needed to support the LED business.

As Cree continues dialing up Wolfspeed's R&D spend -- Cree's total R&D spend rose 24% in fiscal 2019 to $157.9 million -- Lowe says much of the spending is going towards expanding Wolfspeed's product line to include variants of chips that are optimized for specific use cases. "We have more and more customers that want...optimized versions of a chip," he said.

In addition, Lowe asserted that growing awareness of SiC and its potential is making it easy for Wolfspeed to higher top-notch engineering talent. "Power engineers around the world are seeing this incredible trend...all the good ones want to be on that train," he claimed.

With Cree investing heavily right now in R&D, manufacturing and sales/marketing, the company doesn't have any current plans for stock buybacks or dividends. Lowe said it's "probably okay" to take the roughly 5% annual share count growth that Cree has been seeing as a baseline for now.

And in the wake of last year's Infineon RF deal, new acquisitions could also be part of Cree's investment strategy for Wolfspeed. "Whatever we do from an acquisition standpoint, it will all be focused on silicon carbide and gallium nitride business with Wolfspeed," Lowe said.