Much like its last big acquisition -- not to mention some other ones over its history -- Broadcom's (AVGO)  $10.7 billion deal to buy Symantec's (SYMC) enterprise security business has a very strong private equity feel to it.

In a nutshell, Broadcom, which previously saw talks to buy the whole of Symantec end after its offer price was lowered, plans to raise over $10 billion in debt to acquire a large but struggling business at a discount valuation. And the company plans to make the deal pay off by paring Symantec's spending and enterprise product lineup, and focusing the company's sales efforts on its largest clients.

The likes of Blackstone, Carlyle, KKR and Apollo Global can definitely relate to such a playbook.

There are some clear parallels here to the strategy Broadcom, which has said it wants to use M&A to drive consolidation in the enterprise "infrastructure software" market, has unfurled for making last year's $18.9 billion deal to buy enterprise software firm CA Technologies pay off. Last December, Broadcom set a goal of having CA, which produced $1.55 billion in operating income on revenue of $4.24 billion in its last fiscal year as an independent company, to produce annual operating income of more than $2.5 billion in 2-to-3 years time on revenue of more than $3.5 billion.

Broadcom aims to pull this off by narrowing CA's focus to a limited set of core software franchises -- it has already unloaded CA's Veracode app testing software business for $950 million and outsourced its IT services business -- that will largely be sold to its 500 biggest clients. In addition, Broadcom is attempting to transition these clients from making one-off software license purchases to paying for comprehensive, "all you can eat," licensing deals.

Along similar lines, Broadcom says it's aiming for Symantec's enterprise security business to eventually produce about $1.3 billion in "pro forma" EBITDA -- that's up sharply from $350 million in current EBITDA -- even though it sees revenue moderately declining. Whereas Symantec's enterprise security unit produced fiscal 2019 (ended in March) revenue of $2.32 billion, Broadcom is aiming for the business to ultimately provide it with "more than $2 billion" in revenue. 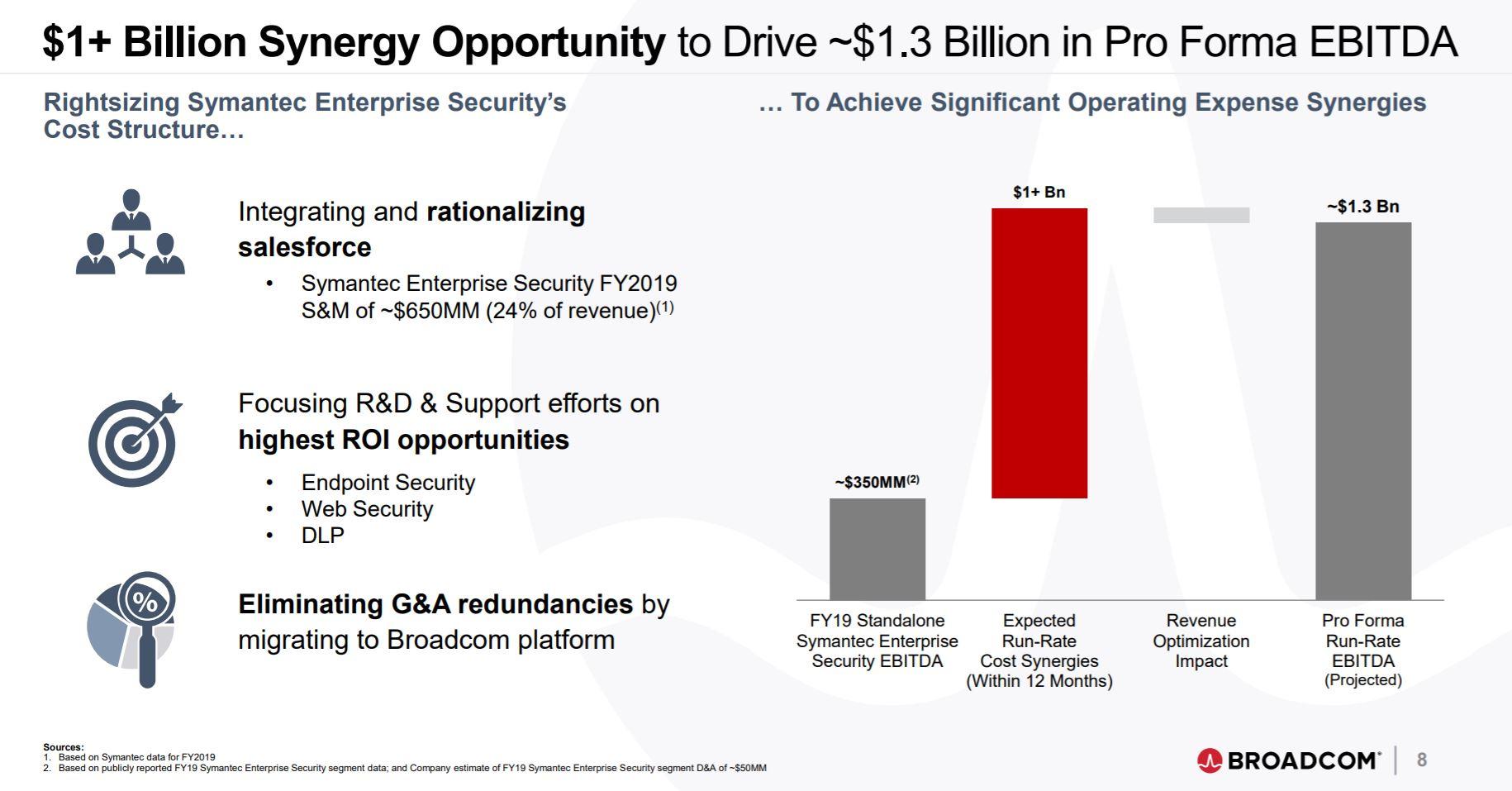 How Broadcom aims to make the Symantec deal pay off. Source: Broadcom.

Major cost cuts are naturally part of Broadcom's strategy for getting a positive return on the Symantec deal: The company is aiming for more than $1 billion in cost synergies on an annual run rate basis within 12 months of the deal's closing. In a deal presentation, Broadcom suggests it plans to significantly cut Symantec's sales spending by integrating its sales force with CA's, and eliminate G&A spending "redundancies."

And -- whereas Symantec currently has a sprawling enterprise product line -- Broadcom wants to focus Symantec's R&D and support services efforts on its endpoint security, web/cloud security and data loss prevention (DLP) offerings, which (per research firm Gartner's numbers) it currently has market-leading positions.

Given its M&A track record, as well as how CA has performed post-acquisition thus far, there are reasons to be cautiously optimistic that Broadcom's strategy for Symantec's enterprise business can work as well. But this is still a more challenging deal in some key ways.

Whereas CA was delivering mid-single-digit revenue growth prior to its acquisition by Broadcom, Symantec's enterprise security unit saw its revenue drop 11% in fiscal 2019. And -- at a time when total IT security spending is growing at a high-single digit clip -- the business has only been expected on average by analysts to grow 2% in fiscal 2020.

Moreover, whereas much of CA's revenue involves a mainframe software business that has limited competition, the Symantec businesses that Broadcom wants to keep are much more competitive, dynamic, fragmented and awash in venture capital funding -- even if Symantec happens to officially be the market leader. 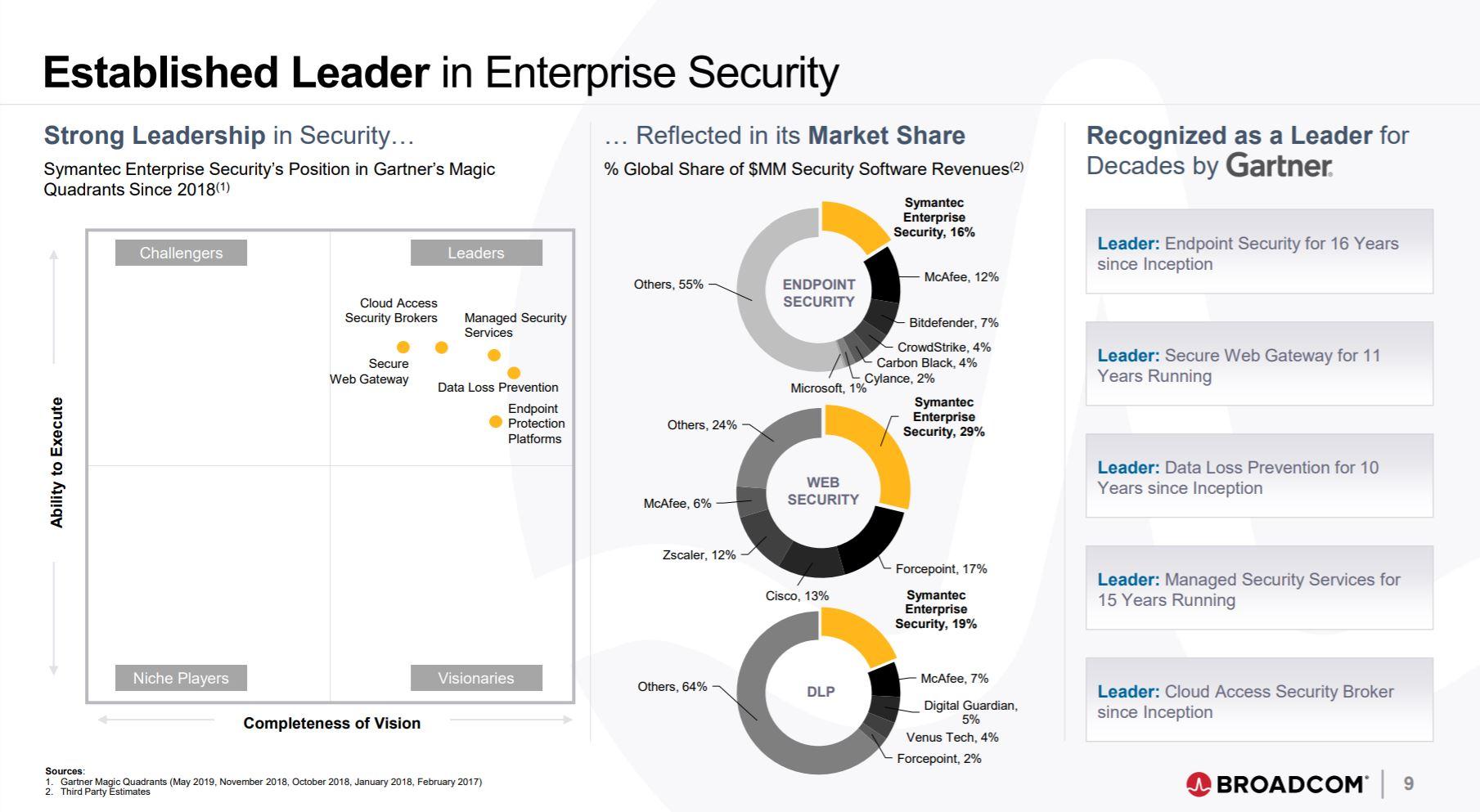 According to Broadcom's own presentation, Symantec has market shares of 16%, 29% and 19%, respectively, in the endpoint security, web security and DLP markets. In addition, the top seven companies in the endpoint security market only claim a combined 46% share, and the top five companies in the DLP market only claim a combined 37% share. Meanwhile, in web security, three other players, including Cisco Systems (CSCO)  and fast-growing Zscaler (ZS) , have double-digit shares.

To be fair, Broadcom's plans (discussed on a conference call about the deal) to jointly sell the offerings of Symantec, CA and its Brocade storage networking unit to enterprises could help provide a sales lift. And so could its plans to add Symantec products to its attempts to sell all-you-can-eat license agreements.

Nonetheless, the Symantec deal does show that -- at a time when well-run enterprise software firms seeing decent growth are often being granted rich multiples -- an acquirer that's looking for bargains is going to have to accept its share of blemishes.

And while it would be a mistake to dismiss the ability of Hock Tan & Co. to make the deal work, considering what they've accomplished to date, Symantec's enterprise security does on the whole look like a more blemished target than CA.