AMD  (AMD) used its CES event to unveil an anticipated notebook processor refresh, as well as a 64-core monster of a desktop chip whose performance and price tag both raised eyebrows.

As was widely expected, the chips are collectively known as the Ryzen 4000 family. Like AMD's third-gen Ryzen desktop CPUs and second-gen Epyc server CPUs, which launched last year, they're made using a 7-nanometer Taiwan Semiconductor (TSM) manufacturing process and Zen 2 CPU core microarchitecture.

Notably, AMD claims the Ryzen 4000 line won't merely deliver major performance gains relative to comparable, second-gen, Ryzen Mobile processors that launched a year ago, but also roughly twice the power efficiency at load. The company attributes 70% of the gain to manufacturing process advances, and 30% to design and microarchitecture improvements. 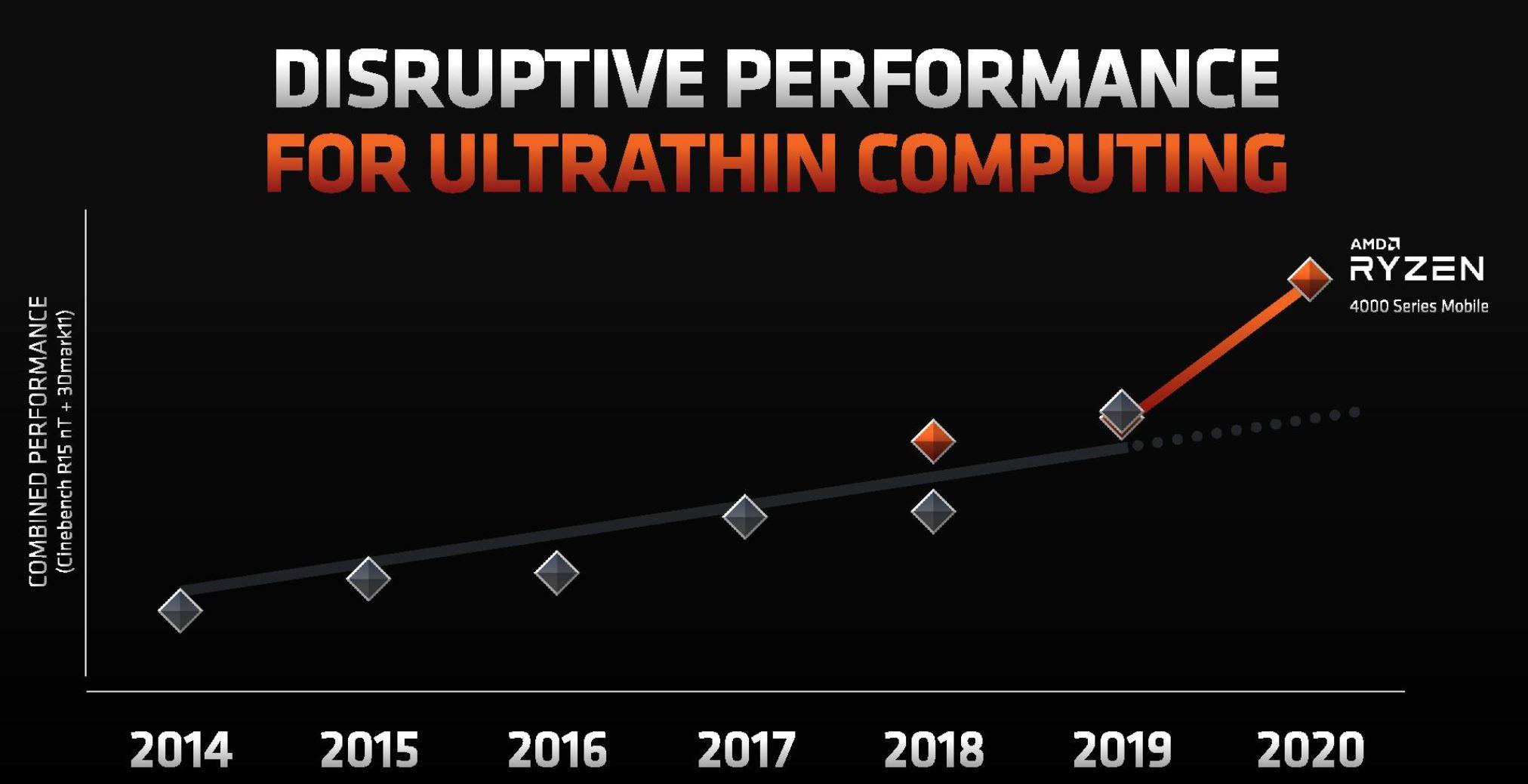 Five of the seven Ryzen 4000 chips feature 15-watt thermal envelopes (TDPs). As such, they're aimed at ultrabooks, notebook/tablet convertibles and other mainstream form factors, and will square off against Intel's (INTC) popular U-series notebook processors. The other two feature 45-watt TDPs, will target more performance-hungry notebook buyers and are pitted against Intel's H-series notebook processors.

Ryzen 4000-powered laptops from top PC OEMs such as Dell (DELL) , Lenovo and HP (HPQ) are promised to arrive in Q1, with additional systems launching over the course of 2020.

Separately, AMD followed up on the November launch of its first third-gen Ryzen Threadripper high-end desktop (HEDT) CPUs, which respectively sport 24 and 32 cores, by unveiling a 64-core sibling known as the Threadripper 3990X. The 3990X will cost a whopping $3,990, or roughly twice as much as the 32-core 3970X, when it launches on Feb. 7th.

Su showed the 3990X, which has lower clock speeds than AMD's other third-gen Threadripper CPUs, outperforming the 3970X by about 50% when running the Cinebench R20 content-rendering benchmark. And amusingly, it beat a 56-core, $20,000, Intel Xeon server CPU by 30% in a rendering test.

Given its pricing and price/performance relative to the 3970X, the 3990X is likely to be a niche product. But there's nothing like it for now in the HEDT market, and thus it bolsters AMD's newly-won status as a premium desktop CPU brand.

AMD vs. Intel in Notebooks

With Intel's Core desktop CPUs and Xeon server CPUs still exclusively relying on a 14nm manufacturing process node that (although improved over the years) first arrived in 2014, AMD's 7nm desktop and server CPU launches have put it on very strong competitive footing in terms of price/performance and power efficiency.

However, since Ice Lake hasn't scaled to the same CPU clock speeds as Intel's most powerful 14nm notebook processors -- a next-gen 10nm platform known as Tiger Lake that's due towards the end of 2020 is expected to fare better -- the chip giant has also been rolling out a new 14nm notebook platform known as Comet Lake. U-series and ultra-low-power Y-series Comet Lake processors arrived last summer, and Intel indicated on Sunday that H-series Comet Lake chips will be launching soon.

As a result, AMD's Ryzen 4000 series will be squaring off against both 10nm and 14nm Intel notebook processors. And based on the numbers that AMD shared on Monday, the company's latest notebook offerings look fairly competitive, even if a lot will depend on a particular user's needs. 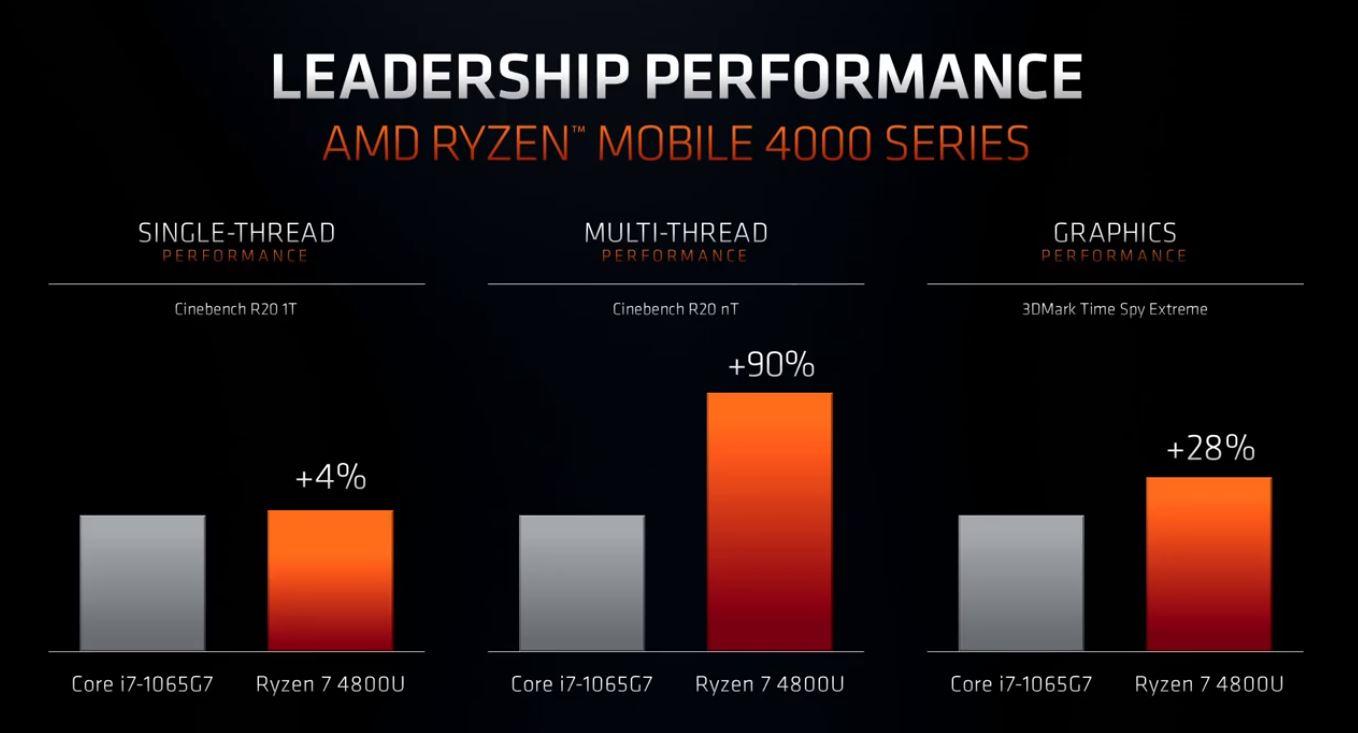 Intel's H-series might still be able to claim a high-end CPU performance lead this year over AMD's 45-watt Ryzen 4000 chips (integrated GPU performance has limited importance here, since buyers of such powerful CPUs are likely to use discrete GPUs). AMD claims its most powerful 45-watt chip, the 8-core Ryzen 7 4800H, beats Intel's 6-core Core i7-9750H CPU (it launched last spring) by up to 5% in single-threaded workloads and 46% in multi-threaded workloads. But Intel also offers a pair of 8-core H-series chips, and is prepping more powerful, Comet Lake-based, 8-core offerings.

Overall, however, AMD's Ryzen 4000 launch does put it on stronger footing than it has been in a long time in a notebook market that accounts for a solid majority of PC shipments. Though time will tell by just how much it does so, AMD, whose stock has baked in its share of good news in recent months, does look poised to add to the notebook processor share gains it saw last year.

Their earnings were a blowout but it's too dangerous to short the name.