Much like some high-flying software stocks that have fallen sharply after delivering numbers that were a little disappointing, rather than truly terrible, AMD's (AMD) post-earnings tumble has much to do with a big 2019 run-up that had reduced its margin of error, rather than issues that truly put its growth story into question.

AMD, which had gone into earnings up 83% on the year, is down over 9% after issuing light guidance in its Q2 report. While the CPU and GPU developer slightly beat revenue estimates and reported in-line EPS, it guided for Q3 revenue of $1.75 billion to $1.85 billion, up 9% annually at the midpoint but below a consensus estimate of $1.94 billion. And with the Q3 outlook weighing, AMD said it now expects mid-single digit 2019 revenue growth, down from prior guidance for high-single digit growth.

But as others have noted, AMD is attributing the guidance in large part to weakening demand for the processors it supplies for the PlayStation 4 and Xbox One, each of which appear to be less than 18 months away from being discontinued. And echoing various other chip suppliers, AMD also said it's seeing "some uncertainties across our supply chain driven by tariffs, trade concerns and the U.S. Entities List." Notably, AMD's Chinese server CPU joint venture is among the companies that were recently put on the Entities List.

Given what Microsoft (MSFT)  and Sony (SNE)  have recently shared about their gaming businesses, there are good reasons to take AMD at its word regarding the factors behind its guidance.

Last week, Microsoft reported its gaming revenue fell 10% annually during its June quarter. The software giant also said on its earnings call that it expects gaming revenue to drop at a similar rate in its September quarter, and that it will be down slightly over the whole of fiscal 2020 (ends in June 2020), with lower console sales offsetting double-digit Xbox software and services growth.

Throw in the fact that -- given how console processor prices typically trend over a console's lifetime -- AMD's console processor average selling price (ASP) will likely be down this year, and you have a recipe for the company's console-related sales being down sharply in 2019 and early 2020.

But AMD's console-related unit volumes and ASPs should both rise sharply during the second half of 2020, given expectations that Microsoft and Sony will each roll out a next-gen console by then. Both companies have disclosed that their next-gen consoles will be powered by an AMD chip containing an 8-core CPU and a GPU that supports real-time ray tracing and (if one has a TV set or monitor that supports it) 8K-resolution graphics rendering.

Meanwhile, the numbers and commentary that AMD just shared for its various non-console businesses suggest that the company still looks well-poised to gain CPU and (to some extent) GPU share in multiple markets in the coming quarters.

On AMD's earnings call, CFO Devinder Kumar said AMD still expects "significant sales growth" this year for its Ryzen PC CPUs, Epyc server CPUs and Radeon PC and server GPUs. CEO Lisa Su, meanwhile, indicated that PC CPU, server CPU and data center GPU sales were up strongly on an annual basis in Q2. PC GPU sales, which have been pressured by channel inventory-clearing efforts following a plunge in demand from cryptocurrency miners, were the one weak spot outside of consoles. 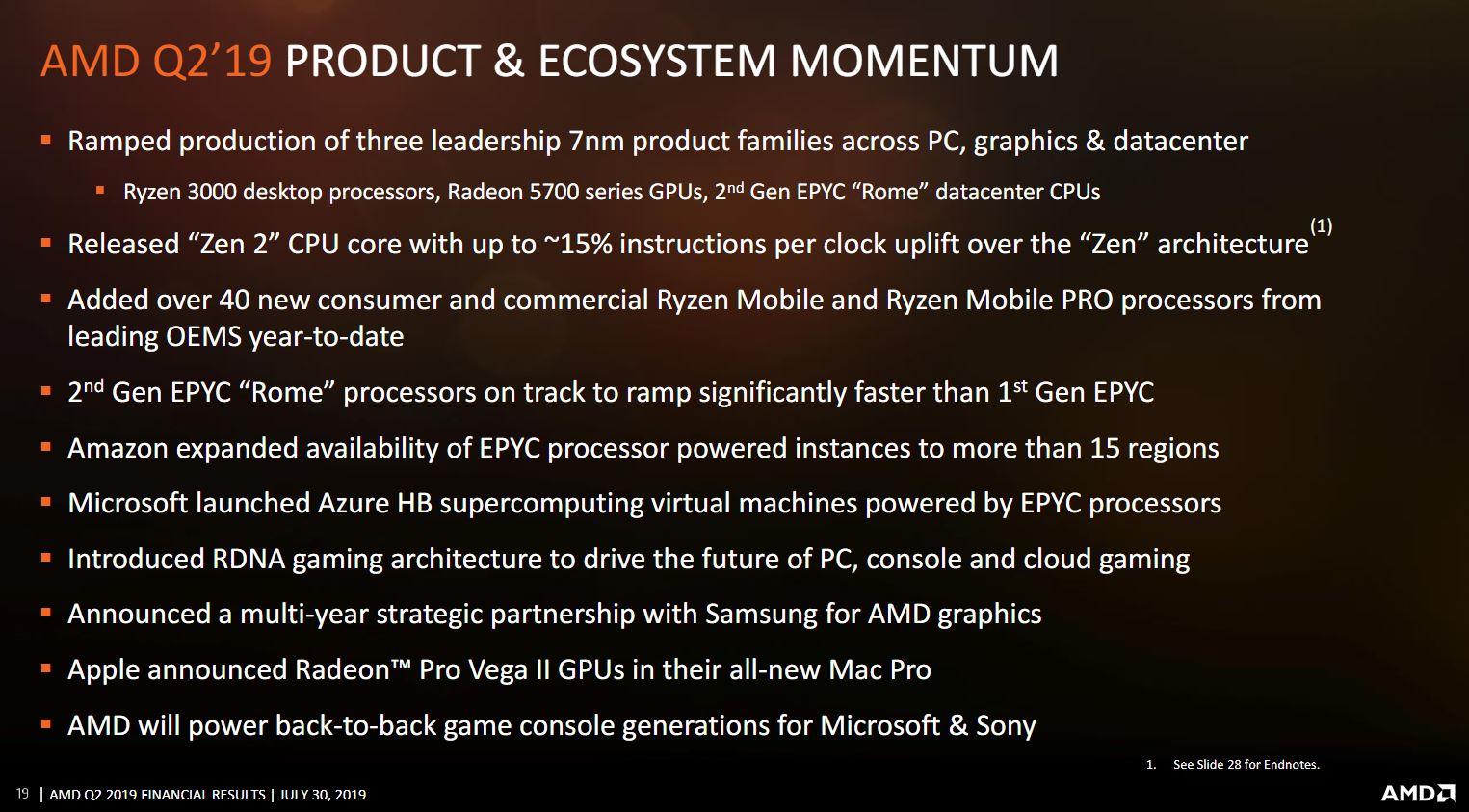 Moreover, recent and upcoming product launches leave AMD poised to add to its non-console momentum during the back half of the year, and into 2020.

In early July, the company launched third-gen Ryzen desktop CPUs that -- with the help of a cutting-edge, 7-nanometer (7nm) manufacturing process and a revamped CPU core architecture -- fared well against comparably-priced Intel (INTC) CPUs in reviews. Around the same time, AMD also launched 7nm gaming GPUs based on its new Navi architecture that (with the help of a last-minute price competitive) offer a decent value proposition for mid-range GPU buyers, provided they can do without the ray-tracing capabilities of Nvidia's (NVDA) GPUs.

And after previously stating the chips would launch in Q3, AMD announced on its Q2 call that it's hosting a launch event on August 7 for its second-gen, 7nm, Epyc CPUs (codenamed Rome), which it promises will deliver up to twice the performance of comparable, first-gen, Epyc CPUs. On the call, Su said that relative to first-gen Epyc, AMD has "more than twice the number of platforms in development" with partners, as well as "four times more enterprise and cloud customers actively engaged on deployments prior to launch." And with Intel having recently pushed back the start of volume shipments for its next-gen Xeon server CPU family to the second half of 2020 from the first half, the opening that Rome provides AMD might have just gotten a little bigger.

Also, Su disclosed on the call that AMD is prepping high-end Navi GPUs. In time, the company is also expected to launch 7nm offerings for its Ryzen Threadripper CPU family, which targets enthusiast and workstation PCs, as well as its Ryzen Mobile notebook processor line (it features CPUs with integrated GPUs).

Considering how much AMD had run up in the months prior to its earnings report, it's understandable that markets weren't thrilled with its outlook. But that doesn't mean investors should panic either.

Get an email alert each time I write an article for Real Money. Click the "+Follow" next to my byline to this article.
TAGS: Investing | Semiconductors & Semiconductor Equipment | Technology |