In contrast to Tencent (TCEHY) , Alibaba (BABA)  comfortably beat its calendar Q2 revenue estimates and largely struck an upbeat tone regarding the back half of the year.

On Thursday morning, Alibaba reported June quarter (fiscal first quarter) revenue of RMB114.9 billion (up 42% annually and equal to $16.74 billion), beating a consensus analyst estimate of $15.94 billion. And with the help of both strong revenue growth and reduced spending growth, non-GAAP EPS came in at RMB12.55 (up 56% and equal to $1.83), above a consensus of $1.47.

Alibaba's shares have risen about 2% in Thursday trading following the news. That leaves them up 20% on the year.

Within the segment, "customer management" revenue, which mostly consists of ads shown on Alibaba's massive Taobao and Tmall marketplaces, grew 27%, with Alibaba attributing the growth both to more ad clicks and improved ad targeting (which yields better ad prices). In time, the running of ads against Taobao's popular news and product-recommendation feed should act as another growth driver. 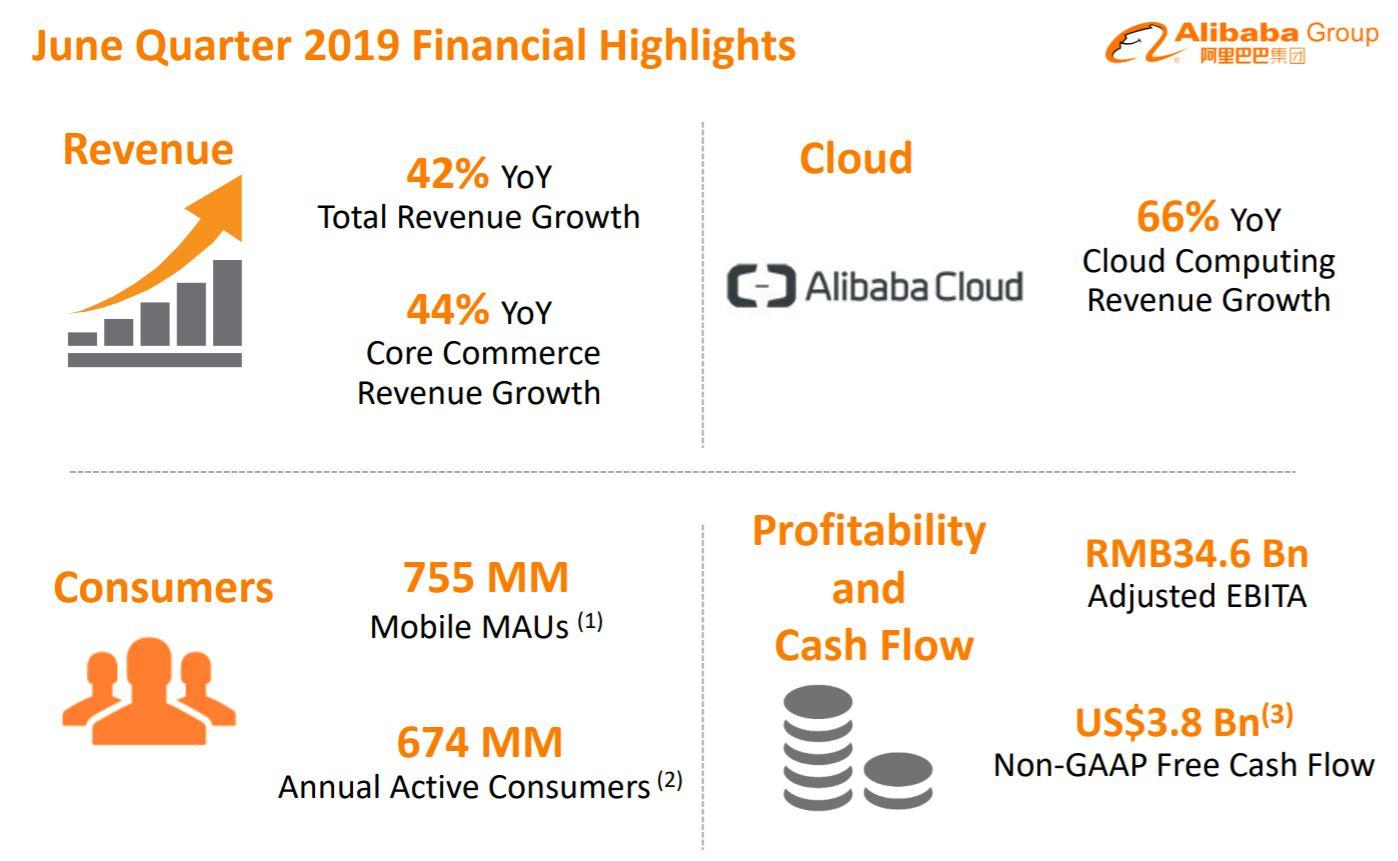 A slew of other Alibaba businesses also grew strongly. The company's international retail and wholesale commerce businesses, which between them account for 7% of revenue, respectively grew 29% and 22%. The Cainiao logistics unit (4% of revenue) grew 50%; "local consumer services" revenue (5% of revenue and driven by the Ele.me local commerce business, which Alibaba took over in May 2018) grew 137%.

Only Alibaba's "digital media and entertainment" segment, which makes up 5% of revenue and includes its Youku online video unit and other content businesses, failed to grow at a double-digit clip, with revenue rising 6%.

With both Alibaba and other Chinese tech companies, U.S. investors should keep in mind that their revenue growth isn't quite as strong on a dollar basis as it is on an RMB basis, due to the yuan's decline against the dollar. In the case of Alibaba's June quarter, revenue rose 42% on an RMB basis and (based on Alibaba's year-ago reporting) 37% on a dollar basis. Moreover, given that Alibaba used a yuan/dollar exchange rate of 6.87 in its latest report and that the exchange rate now stands at 7.03, the gap between RMB and dollar-based growth rates could be higher for Alibaba's September quarter report.

Nonetheless, 37% growth is still nothing to scoff at for a company of Alibaba's scale, particularly at a time when worries about slowing Chinese GDP growth and macro/trade uncertainty are running high.

Whether in dollars or RMB, Alibaba's top-line growth compares favorably to the growth rates Tencent reported on Wednesday. Yesterday, Tencent sold off after beating EPS estimates but reporting 21% RMB-based revenue growth and 16% dollar-based growth, both of which were below analyst estimates.

To be fair, Tencent's massive gaming business has been stung lately by a halt on Chinese game monetization approvals that ended earlier this year. And the company is dealing with some short-term issues affecting revenue growth for its mobile payments business that don't put its long-term health into question.

But Tencent is also dealing with competitive headwinds -- namely, the growth of private ByteDance's Douyin/TikTok video app, which has helped create a glut of Chinese video ad inventory -- to a greater degree than Alibaba. And with Tencent indicating that both macro challenges and a video ad supply glut will continue weighing on its ad sales during the second half of 2019, Alibaba, which sounded optimistic on its earnings call that its recent sales momentum can continue in the coming months, seems to be less affected for now by the trade war in particular and China's recent macro pressures in general.

As noted yesterday, whereas Tencent's ad business depends heavily on discretionary ad buys from businesses in various industries, Alibaba's ad business is (to a large extent) directly tied to e-commerce activity on its platforms. For this reason, even as Tencent's ad sales get hurt by the emergence of a more cautious investment mood among businesses, Alibaba's ad sales growth can remain healthy as long as shopping activity on its platforms remains strong -- especially if the company begins taking steps to monetize its Taobao feed.

Meanwhile, thanks in part to Beijing's stimulus efforts, Chinese consumer spending has looked relatively strong. And certainly, both Alibaba's June quarter results and the Q2 numbers delivered earlier this week by top Chinese e-commerce rival JD.com do nothing to change this perception.

It's possible that Alibaba will start seeing greater headwinds in time from macro and trade pressures. But for the time being, the company is weathering the storm pretty well.

Get an email alert each time I write an article for Real Money. Click the "+Follow" next to my byline to this article.
TAGS: Earnings | Investing | Technology

The Tactical vs. Strategic Approach to Markets, Game on for the Semis